Justin, This Man Needs a Word With You. 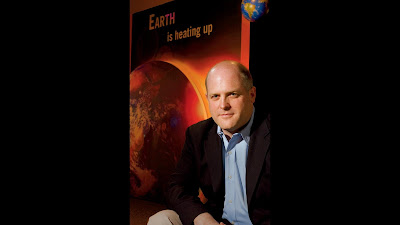 That's "extraordinary" not in the good sense. That is Daniel Schrag's opinion of what awaits us from climate change. Daniel who?

He’s the director of the Center for the Environment at Harvard University where he’s a professor of environmental science and engineering. At Harvard’s Kennedy School of Government, Schrag is co-director of the Science, Technology, and Public Policy program. Throughout President Barack Obama’s eight years in office, Schrag served on the President’s Council of Advisors on Science and Technology, contributing to many reports.

Oh, of course, that Daniel Schrag. So what's he on about?


In the late 1950s the CO2 readings were 315 parts per million. In 2018, that reading has exceeded 400 ppm. In analyzing Earth’s geologic record, Schrag says, “never in the last 800,000 years has CO2 been above 300 ppm.” Schrag says the last time atmospheric CO2 levels spiked sharply was around 36 million years ago when non-human factors were at play. Even then the spike occurred over thousands of years.

“We’re likely to see 4 maybe even 6 degrees (Celsius) of (global) warming over the next 100 years,” says Schrag, “and it’s happening more than 100 times faster than climate change we’ve experienced in the past.” Schrag believes there might be even more to be concerned about, saying there might be additional factors worsening climate change that scientists have not anticipated.

Adding to his grim forecast, Schrag says reversing the trend will be neither easy nor quick. For one thing, more than half of the CO2 currently affecting climate change will remain in our atmosphere 1,000 years from now. “A silver-bullet solution is not around the corner. It will require innovative investments sustained for at least the next century,” he says.

Schrag says public policy energy choices made “over the next decade or two will have profound effects on the Earth’s system, on every living thing on the planet.” Schrag says determined and sustained energy choices that reduce CO2 emissions are urgently needed to prevent his doomsday prophecies from becoming realities of biblical proportions.

Hmm, let's unpack that. Four to possibly six degrees Celsius of warming over the next hundred years. Science tells us that's basically unsurvivable for human civilization. Then he points to the pin in the grenade: public policy energy choices made over the next decade or two will have profound effects on every living thing on the planet.

I mention that because in Canada today we're making public policy energy choices for the next decade or two and they involve the extraction, transmission and export of the world's most toxic, high-carbon, fossil fuel - bitumen - as much and as fast as possible.

Which brings me back to Schrag's first line: "Just wait. What's coming is really extraordinary." Sounds kind of exciting, doesn't it?

But, then again, there's more than one opinion on this. You've got this high school drama teacher over here and, on the other side, this Harvard science guy, one of Obama's science advisors. How do you choose between those two? Maybe we should go with the guy with the best hair. That rules out this Schrag fella, right? Or maybe we should get serious.

Maybe it's time we came to grips with the path Justin Trudeau has Canada on and what that means for our grandkids. Maybe we need to ask how Canada can have a green future if we're doubling down on bitumen. Maybe Liberals need to ask what comes first, their party or Canada.

Choices we make today and over the next decade will massively impact human civilization and all life on Earth. Every supertanker that your government manages to send out into English Bay will have a human toll attached to it. Is that your idea of Canada and Canadian values?

.. as always, thanks Mound, I will be reading his article grimly

I often wonder, Mound, why the press doesn't hod Trudeau's feet to the fire when he makes such risible assertions that we can have increased bitumen production AND solve global warming. It's time for the media to grow a pair.

I've said it before and it's worth repeating: "If we all practiced recreational sex instead of procreational sex the problem would solve itself in a generational (in evolutionary terms) minute."

There is one small consolation....Justin is young and will likely live long enough to know that he screwed up big time.

"There is one small consolation....Justin is young and will likely live long enough to know that he screwed up big time."
If KM gets built we will name the first tanker spill "Trudeau" in his honour ... subsequent disaster names, anyone?