No Takers for Pipeline? What's the Surprise in That? 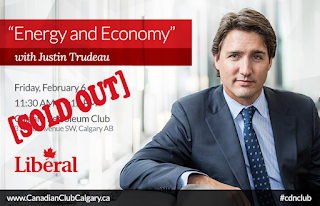 To hear Bill Morneau tell it, potential buyers would be falling all over each other to take over Kinder Morgan's Trans Mountain pipeline.  Apparently not. There is no queue. Nothing on the horizon.

There are many reasons for investor indifference. Kinder Morgan says it has orders for two-thirds of the Trans Mountain capacity. Really, from whom?
Asia? Three year contracts? Endless renegotiation and uncertainty? The prospect of bitumen becoming a "stranded asset"? The announcement by OPEC that it may open the taps again to drive current high oil prices back down? I don't know, what's not to like?

Then there's that business about never leaving money on the table. For this pipeline, it's a buyer's market. Trudeau and Morneau have revealed that Ottawa is willing to offer financial incentives to see this pipeline through to "tidewater." Any potential buyer for this has to be wondering how hard they can grind the Trudeau government and they are definitely going to squeeze Ottawa for everything they can get. They're not going to settle for the wallet. They want the diamond ring and the Rolex too.
Posted by The Mound of Sound at 9:02 AM

I just turned 70. How will I ever pay for this before I die ?

Some one needs to tell the Libs that this isn't the way you play poker.

The reports emerging out of this debacle are rather spooky. Investors would probably want a hell of a lot more out of Canada than what's already being offered to enter into talks. And Canada's already offered the unborn babies of Gen Z. What more is there left to offer? Organs?

At some point, somebody in government needs to take Trudeau aside, and let him know, this pipeline is dead. Canada's energy industry is dying.

There's no viability. There's no profit. There are no emerging markets. As of right now, carbon fuel markets at the climax. There's only decline ahead, and the drop-off for Canada might well be steep. It may be well a fall.


Well, Rumley, I would be pleased to help. Send me all your money and, in the event of your untimely demise, I will attend to forwarding it to the appropriate agencies - me.


Yes, Owen, it was a pretty huge "tell" when they sent Morneau scrambling to Texas cap in hand. That's the sort of desperation that predators can smell.


Troy, we may be witnessing something unfolding that will be experienced in other countries in somewhat different ways. It's such a high-stakes game that's being played out with such a wide spectrum of impacts and outcomes extending to the survivability of life on Earth. There are so many bands to this spectrum - individual, community, municipal, tribal, provincial, federal and global and their interests sometimes overlap, sometimes conflict.

This decade promises a wild ride for everybody.

"And now a brain-dead federal government with unhealthy commitments to China wants to rescue a truly bad megaproject championed by the bastard child of Enron and a bunch of climate-denying Texans.

The result will be an unprecedented disaster for Canadian taxpayers."

Remember how we all thought Dick Cheney ran the GW Bush presidency? Is Bill Morneau directing Justin Trudeau? Of course, Morneau will be acting on behalf of the banks. I'm thinking of your post a couple of weeks ago that Canadian banks are over drawn on the Tar Sands and Morneau (and Trudeau) may believe they have to have that pipeline in order to prevent a banking crash. These guys may actually think they are heroes saving Canada and maybe the world. Well, Trudeau is a drama teacher. Whatever is happening in his office spells trouble for the rest of us.

. Well, Trudeau is a drama teacher....
And the play he is currently appearing in is a Brian Rix farce.

There maybe those that wish to use the pipeline but where will it be shipped to?
Most guesses suggest to the USA to existing customers and at current prices.

Brian Rix in 1984. His farces usually involved a lie, a comic deception and someone being caught with his trousers around his ankles.


Thanks for the link, Hugh. Nikiforuk has taken off the gloves this time. Trudeau doesn't care about the viability of this pipeline or the people and territory he's putting in jeopardy. He wants a deal with China. Everything and everybody else - totally expendable.