The Whales' Song Has a Special Message - For Us. 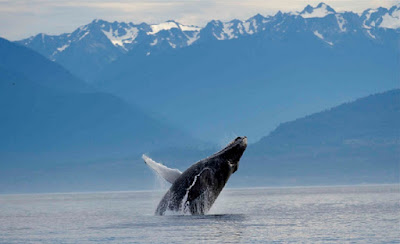 Out here you don't hear people express much concern about the influx of marine life from southern waters.

We tend to see them as newcomers rather than what they are, refugees. Whether minuscule or huge they're all components of a marine food chain in pursuit of more suitable, i.e. cooler waters. From seabed to surface, the whole chain moves.

They are, to be sure, a business opportunity for whale watchers who load tourists into Zodiacs to buzz around humpbacks and pods of orcas.

We don't tend to see them for what they are, creatures fleeing something. Creatures emptying out of what had been their home waters since time immemorial. We don't grasp the magnitude of what's happening or the significance to our own lives.

Just because these creatures, fish and mammals alike, have moved into our waters doesn't mean this is a natural home for them. It doesn't mean that northern waters won't present challenges, even hold threats to their survival. It's going to take generations to see how they'll adapt and some are bound to fare better than others.

Nor does it mean that coastal British Columbia waters are their "new normal," their new home. In a decade or two they may migrate further north again whether in search of food or more suitable waters. No one knows but we can hope someone knowledgeable is at least asking the questions.

What are they telling their terrestrial companions, especially the top of the land-based food chain, us? Shouldn't we understand that these are creatures in flight. "It's the trip, not the destination" sort of thing, the creed of all nomads.

What they can teach us is that this is the world we now live in, a world increasingly different from the world most of us were born into. We grew up as part of the Holocene (or so we were told). Now we're part of the Anthropocene (so we are told). Stamp that epochal passport. And it's all man-made, baby. We have done it. We have remade Earth in our own image even if it is not as pretty as our vanity led us to expect. Those whales? We made them move.

I think what we're seeing in these North Pacific waters is a huge wake-up call. It's time to look around us at the other migration, terra firma. Land-based life forms, animals and plants, are having a harder time migrating which means they'll have worse prospects of survival.

Birds have a huge advantage. Earthbound species, however, have to get around roads and fences, rivers and lakes, towns and cities, obstacles of all sorts. They may have to cross areas such as deserts that do not support much life. Some will have to run the gauntlet of predators lying in wait.

Then there are plants. Know what the migration rate is for plants? It's pegged at 8" a year.

These creatures may need a little help from the same species that created their predicament, us. That begins by an awareness of the too poorly understood contributions these endangered species make to biodiversity and the role that biodiversity plays in our own survival. Rule of thumb: they don't make it, we don't make it.

The arrival of those newcomers - the sardines, the whales, the dolphins, those annoying sea lions - are our wake-up call. That's a good thing if we start paying attention to it and the message that it is sending us.

As to the people with the power to do something constructive, they don't want to know.

Reminds me of a story I heard a whale researcher tell. For years people prayed to God asking, "what is the meaning of life?" Fed up with the same question over and over, God appeared to some and answered, "There's a creature in the sea whose brain is far bigger than yours. It swims great distances exploring the world and spends months meditating without eating. Why don't you ask the whale instead of bothering me?"

But people kept praying to God with the same question. Years later he could take it no more, so he went back to confront the people and asked, "Did you talk to the whale in the sea like I told you to?" The people shook their heads and said, "what's a whale? There's no such animal in the sea."

To its credit, the Federal government has moved aggrsssively to try to protect the right whale which has moved into the gulf of St Lawrence during summer these past few years. The crab fishermen are all grumbling, the world's freight ships hate the 10 knot limit going to and from the Seaway, and hate being caught and fined even more. But too bad about them - killing a right whale is bad for company PR anyway. There were about 20 killed last year and only fewer than 500 left. Having US oceanographic institutions keeping an eye on us certainly helps keep the feds on track.

Having lived next to the ocean most of my young life and then later in South Korea returning to this land lock province, where people don't have the foggiest about oceans, I agree with 1:24. My father was a Department of Fisheries Officer. He retired at age 53 after arresting the first Russian Trawler off the coast of Newfoundland. They, the Japaneses and most other countries killed the fishery in Newfoundland while dumping their garbage into the Atlantic Ocean which is what all ocean vessels do....it doesn't matter who they are. Anyong