Talk About Going Hog Wild With the Company Credit Card 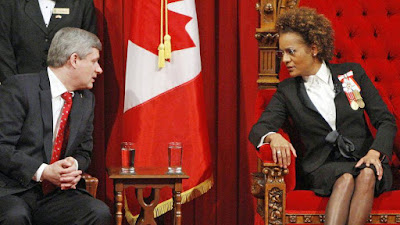 You may remember her for helping Stephen Harper dodge a bullet when then governor general, Michaelle Jean, consented to Shifty Steve proroguing Parliament.

You're less apt to remember that she then went on to become secretary-general of La Francophonie. It seems she figured that was her ticket to the high life.


Her tenure as secretary-general of the Organisation internationale de la Francophonie has been dogged by reports that the former governor-general of Canada was indulging regal tastes.

There was a $500,000 renovation for the Paris apartment put at her disposal, a $20,000 grand piano to put in it, a chauffeur and car for her husband, Jean-Daniel Lafond. France’s l’Opinion newspaper reported her entourage spent $50,000 in four days at New York’s Waldorf Astoria hotel.


Ms. Jean has argued her expenses were for the good of the Francophonie, or even part of a disinformation campaign against her. The Canadian government defended her, and endorsed her bid to keep the job.

But as the representative of an organization whose 57 members include some of the poorest countries in the world, the allegations were giving her a Marie Antoinette reputation.

And now, she can no longer escape the guillotine, anyway.

Her tenure as secretary-general is doomed. France and some African members of the organization have already settled on a replacement.

Perhaps when she was the Queen's representative in Canada, Mound, Jean developed regal tastes?

Yes, I "remember her for helping Stephen Harper dodge a bullet." I think she made a terrible mistake.


It could be, Lorne, that a stint in Rideau Hall does leave the occupant with a legacy of regal aspirations. Isn't that what happened to Adrienne Clarkson?


In hindsight, I'm not sure she would have done the opposition many favours by forcing Harper to call an election, Toby. The Libs had Ignatieff and he was a disaster on two legs.

As I remember it, Dion and Layton were pushing a Lib/NDP coalition when Harper persuaded Jean to let him prorogue Parliament.


You missed a few, Toby:

"In 2008, Harper prorogued Parliament after opposition parties threatened to bring down his minority government. He did it twice more in 2009 when Harper claimed he wanted to keep Parliament in recess during the Winter Olympics (while opposition members felt it was to avoid investigations into the Afghan detainee affair)— and the fourth time was in 2013 after the opposition said he was avoiding questions over the Senate spending scandal."

Ignatieff became Liberal leader in 2008 just as the Great Recession swept across the world. Harper had a minority and feared being tossed on a confidence vote so he had Jean prorogue Parliament.

Iggy had two months - the period of prorogation and the Christmas break to get to work and fashion some sort of stimulus budget. Instead he squandered the time at home working on a history of his maternal family, the Grants.
When Parliament returned, Iggy showed up empty handed, proclaimed that he was putting Harper "on probation" and backed Harper's pathetic stimulus budget that I described here;

Thanks. I always get confused when I try to remember the sequence of events on this one.


Dion was party leader when the opposition made its coalition move after the election of Oct 2008. At the time that Jean approved prorogation in early Dec, Dion had already announced that he would step down in May 2009. I think that this intention had been understood during the coalition discussions. After approval of prorogation he was pressured by the party to leave sooner, which he did the following week. Ignatieff stepped out from the wings and was appointed interim leader. At the time it appeared that Iggy's attention was consumed by his desire to get the job.