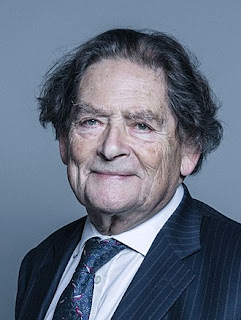 He's Lord Lawson of Blaby (swear to God, "Blaby") has apparently decided to reward himself for helping to pull Britain out of the European Union by pulling up stakes and moving to the European Union. Folks, you can't make this up.


The ex-Conservative chancellor, who chaired the Vote Leave campaign during the EU referendum, has started the "tiresome" paperwork required for a carte de sejour.

He insisted he is not applying for French nationality.
Lord Lawson was Blaby MP for 18 years from 1974 to 1992 and served in Margaret Thatcher's Cabinet between 1981 to 1989.

A carte de sejour shows a person is legally resident in France, and could help avoid complications after Brexit.

By gad, sir, now you mention it, I see the resemblance. It's the eyebrows.

Nigella recently toured North America, and I caught by chance a couple of her TV interviews. They started the same way, she was treated as if she were a know-nothing Brit, but she skewered them verbally so neatly, it took them a minute to realize they had been subtly insulted. Then, they paid attention because she can also cook. Enjoyed the scenes immensely.

She doesn't share Daddy's politics though. Here's a laugh


That was pretty good, Anon. Thanks for the link. Out of curiosity I Googled Blaby and checked it out on Trip Advisor. Not sure I'll be heading there anytime soon. I can see why the old bugger wants to head for France.

Maybe Lord Lawson wants to avoid a possible annulment of Brexit.
There are rumors that globalist Soros is pouring money like no tomorrow to influence the outcome of the prospective new referendum.
Let's hope that British folks will not fall for Soros' honey trap.


Okay, Anon. I assume you don't understand what a "honey trap" is and is not.

No worries, mate. I have used the term "honey trap" on purpose. To ensnare you!

However, your reply would be more illuminating if you would bother to comment on why globalist Soros is meddling in British politics.

When you put someone with 'Lord" in front of his name in the same paragraph as Margaret Thatcher then you have every reason to lose faith in human reason.

Ah yes, George Soros, the bogeyman small minded right wing whack jobs like Breitbart, InfoWars and Bill O'Reiily trot out to blame for everything bad in the world:

Trying to distract from the actions of the Koch brothers, Rupert Murdoch and others who get involved financially and politically on both sides of the Atlantic. Ignoring the fact that Nigel Farage was getting help from both Steve Bannon and Julian Assange in the pro Brexit vote. But watch out for Soros, the alt right hates him! Wonder why?

Brexit is THE escape from the clutches of globalization.
Anything wrong with that?