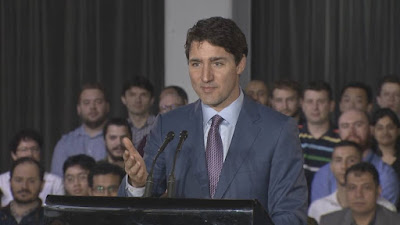 For some reason - well, for lots of reasons - it's hard to trust that boy, Justin. He's broken promises so freely and told so many tall tales that he's just not credible.

At the end of last month Trudeau popped up in Vancouver to announce that Amazon was adding 3,000 tech jobs to its BC operations. Manna from Heaven. Bounty for all. Trudeau's people even brought in a gaggle of tech geeks for a Trump-like backdrop.

Now there are some awkward questions about the Amazon deal and no one seems interested in answering them.


Trudeau’s April 30 event, at which he boasted about “Amazon’s commitment to recruiting top talent from our universities,” raises more questions than answers, particularly about the role played by Canada’s migration policies in producing the country’s high-tech labour force.

...But why does Trudeau, a globalist who champions free trade and the free movement of labour, not talk about federal foreign-worker-recruiting methods in the country’s technology sector, especially in contrast to the more protectionist approach in Donald Trump’s U.S.?

Amid the murkiness, for instance, I’m not aware of anyone who has an answer from the federal Liberals on whether the government has offered tax, migration or labour concessions to Amazon to bring the technology giant to Vancouver and other parts of Canada, where it already employs more than 6,000 people.

After all, the federal government and B.C. Liberals granted a labour-market exemption in 2014 to Microsoft so it would expand operations in Vancouver. The exemption means the Seattle-based multinational can hire foreign workers in Canada without first having to prove qualified Canadians are not available.

The extent to which Canadian high-tech companies rely on foreign workers, international students and would-be migrants is explained in the book Trans-Pacific Mobilities: The Chinese and Canada (UBC Press), edited by the University of Calgary’s Lloyd Wong, with a key contribution by SFU’s Karl Froschauer.

Although Wong and Froschauer have never responded to my requests for interviews, they wrote in Trans-Pacific Mobilities that Metro Vancouver’s high-tech companies assertively look abroad for workers, mostly from Asia, and especially in India and China.

...To put it simply, Canada’s open attitude to tech talent is the opposite of Trump’s, where the current national motto is, “Buy America. Hire America.”

Trump talks about further cracking down on the country’s coveted H-1B visas, which are used to place foreign workers in high-skilled U.S. jobs. As the BBC reports, U.S. politicians place a tight cap on H-1B visas because many do not want to see them used to replace skilled American workers with cheaper overseas counterparts.

Trudeau, on the other hand, is fast-tracking offshore high-tech workers and students. He’s brought in efforts like the Global Skills Strategy, which builds upon the 2015 “Express Entry” program; a free, online process that allows skilled workers to apply easily to immigrate.

I guess that's what you can expect when someone tells you that your Canada is now a "post-national" country.

It's predictable, and dismaying. There should be some economic multiplication effect from Amazon being in Vancouver, but... the threat of Amazon fleeing were Canada to impose Canadian values onto it... What's the point of Amazon in Vancouver if the local stakeholders have no say?

This is a major weakness of neo-liberalism: an ability to build. This idea importing is the same as development.

Amazon will import workers to work in its import/export business, and somehow, after ??? happens, Vancouver and BC and Canada will profit.

There'll be some profit to be had, but this deal hollows out Vancouver industry to a degree. And importing workers will only serve to help crowd out local workers, and further press the housing/rental market. This will only act as a dilution to Canadian-based business and industry, and serve to overheat any already crowded Canadian housing market.

This really isn't the method any nation should be using to build its industry. It's ass-backwards, and Amazon can pull out of the deal whenever it feels like.

The most dismaying part of this is there will be profit, but mostly by Amazon, who'll export that overseas to a tax-free zone. And when money disappears like that, it becomes worthless. Unspent money is the same as worthless trash.

The federal government, both Harper's and Trudeau's, has done a great deal to Vancouver and bloody little for it. I would love to see British Columbia out from under Ottawa's boot.

I don't doubt that Amazon has used convenient Vancouver to mitigate the effects of America 1st (which obviously predates tRump, just more subtle)

Even 15 years ago, the California-based tech giants I dealt with generally hosted their summer gatherings ("Global Sales/Marketing Meetings) in Vancouver or Whistler and winter stuff in Mexico or the Caribbean. They would have prefered the convenience and low cost of meeting on or near their HQ campuses but had experienced too many US immigration hassles for their visiting foreign workers. They prefered friendlier places.
.........................................
This particular deal (I'm guessing) is about using the old post office facility as a physical warehouse & distribution center. It will be as automated as possible (and more so over time to disappoint the 'job creation fans'). The actual jobs will be low wage. They better not need too many cause, as we all know, low wage workers can not afford to live in Vcr.

There is sad but rich symbolism in this deal: the public Post Office facility becomes a private distribution facility.

(And all of Jr.s 2015 infrastructure promises have simply been turned into privatization schemes that are currently going nowhere it seems.)

Troy Thomas...your comment is very true...."
There'll be some profit to be had, but this deal hollows out Vancouver industry to a degree. And importing workers will only serve to help crowd out local workers, and further press the housing/rental market. This will only act as a dilution to Canadian-based business and industry, and serve to overheat any already crowded Canadian housing market.".....there are over 33,000 people in Alberta aged 45 and up who cannot get a job.....it is the same thing over and over again. Graduating with a second degree at age 49...I could not find employment and had to go over seas to work....same old same old. At least B.C. is standing up. Here, people can't wait for the election to vote Jason Kenny into power...and nothing about the economy on his platform. Anyong