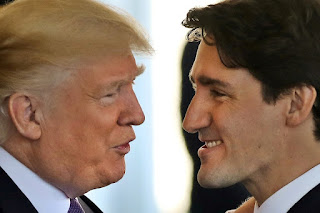 A leaked White House memo describes Donald Trump's approach to climate science reports generated by the US government's own agencies. He picked Door 3, just ignore it.

The memo presented three options without endorsing any of them: conducting a “red team/blue team” exercise to “highlight uncertainties in climate science”; more formally reviewing the science under the Administrative Procedure Act; or deciding to just “ignore, and not seek to characterize or question, the science being conducted by Federal agencies and outside entities.”

In short, the White House considered ‘debating’ established climate science, casting doubt on scientists’ conclusions, or just ignoring them. Accepting and/or acting on the findings of the scientific experts is not an option they’re willing to consider.


Well that just sounds reprehensible, doesn't it? Then again, what's worse - reprehensible or hypcritical - if the end result is the same? Trump, Trudeau - does it really matter? Less than you might like to imagine.

It's government by old conservative men's gossip during a round of golf. In other words, government by selected old wives tales. Reality has nothing to do with it. Who needs educated scientists raining on the money-extraction class' parade? Not these all-knowing bozos.