So, You've Got Your Enquiry. Now What Are You Going to Do, Prime Minister? 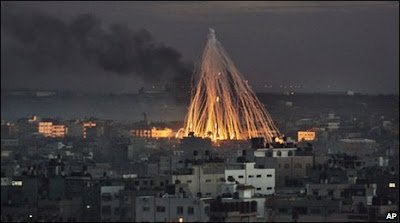 It's not that hard to figure out. You've got somewhere between 1,400 and 2,400 dead and wounded on one side and, on the other, zero - no dead, no wounded. That tells you something. You had a few people haplessly throwing stones on one side and four army sniper emplacements on the other side. A couple of stones going one way and thousands of bullets going the other. That tells you something too. See how quickly it all adds up? Then you notice that the dead and wounded are all within their own territory, the Gulag we call Gaza. No dead, no wounded on the Israeli side. The Gazans have the dead and wounded. The Israelis are up to their arses in spent shell casings. Hmmm, yeah.

It didn't take the UN long to deliver the verdict:


The UN’s senior human rights official has castigated Israel, saying there is little evidence that its armed forces attempted to minimise casualties during protests by Palestinians this week during which dozens of demonstrators were killed.

As a special session of the UN human rights council voted to set up a commission of inquiry to look into Monday’s violence, Zeid Ra’ad al-Hussein said that while 60 Palestinians were killed and thousands injured in the day of protests, “on the Israeli side, one soldier was reportedly wounded, slightly, by a stone.”

Hussein told the UN meeting in Geneva that many of the Palestinians injured and killed in the protests “were completely unarmed [and] were shot in the back, in the chest, in the head and limbs with live ammunition.” He said there was “little evidence of any [Israeli] attempt to minimise casualties”.

I first noticed this the last time Israeli forces devastated Beirut. There was an opening air campaign, three to four days. Israeli jets took out Beirut's power stations. They took down the water system. They destroyed the sewage treatment system. It was so calculated, so methodical that it was obviously deliberate. Then the jets moved on to attack hospitals and schools. Finally they turned on residential neighbourhoods. The neighbourhood they chose to devastate had a name, Dahiyeh. This is what it looked like when the Israeli jets were done: 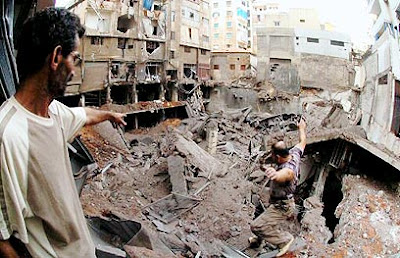 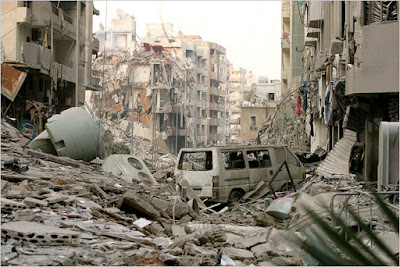 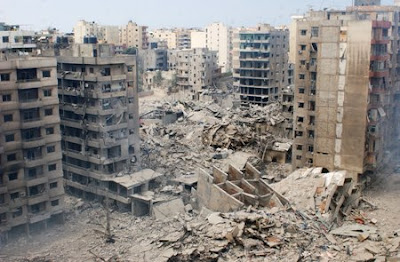 And a lovely "before and after" 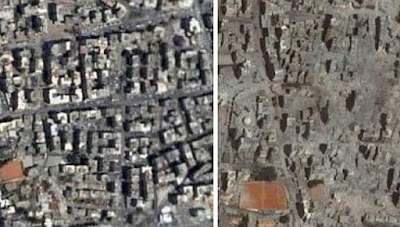 And then, a few years later, Israel visited this living hell on Gaza. Again the very same pattern. A few days of air strikes and artillery fire on power plants, water plants, sewage plants, moving on to hospitals and schools, and then devastating residential neighbourhoods. Why? Because Hamas, the inmate population of the Gaza Gulag had fired some rockets into Israel that killed almost no one.

And what did Canada do? Sweet f#@k all.

Today they've named this monstrous, rolling war crime "Dahiyeh" after the Beirut neighbourhood where the Israelis perfected their technique. It even has its very own Wikipedia page.

That this is entirely deliberate was made plain when WikiLeaks released US embassy cables in 2014:

Israeli army officers mentioned the “Dahiya Doctrine”. One of them, General Eisenkot, said that, in relation to the doctrine, “Israel will use disproportionate force upon any village that fires upon Israel ... causing great damage and destruction."

Eisenkot was very clear that it was not a recommendation, but an already approved plan

From the embassy cable:

6. (8) Eisenkot labelled any Israeli response to resumed conflict the "Dahiya Doctrine" in reference to the leveled Dahiya quarter in Beirut during the Second Lebanon War in 2006. He said Israel will use disproportionate force against any village that fires on Israel, "causing great damage and destruction." Eisenkot made very clear: this is not a recommendation, but an already approved plan.

There's an Old Testament element to this where David goes into the region and slaughters all the local tribes to ethnically cleanse the land for the state of Israel. There's a real parallel to Benjamin Netanyahu's plans for the place. He's methodically transforming Gaza into a death camp. 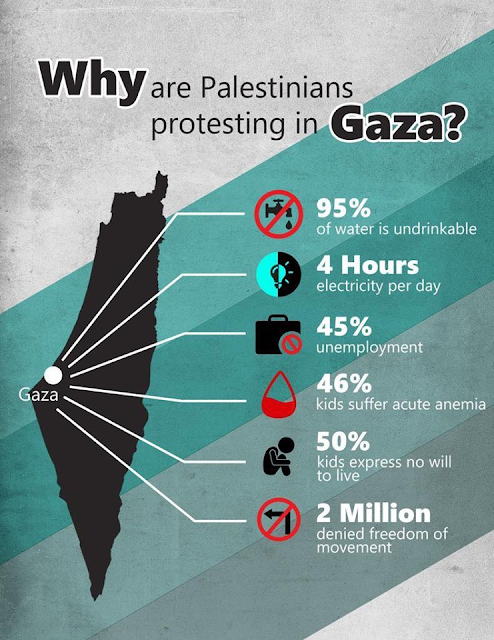 So how bad is it in Netanyahu's Palestinian death camp? A UN assessment warns Gaza is going to be uninhabitable perhaps as early as 2020.

Gaza could become uninhabitable by 2020 due to war, its economic blockade, debilitated infrastructure, and environmental concerns, according to a new UN report on Palestine released this week.

The findings of the UN's Conference on Trade and Development (UNCTAD) echoed an earlier assessment made by the UN in 2011, which determined that Gaza would not be livable by the start of next decade "without herculean efforts" to improve health, education, energy, water, and sanitation.

This is ethnic cleansing at its worst.


"The most recent military operation, in 2014, impacted an already paralyzed economy at a time when socioeconomic conditions were at their lowest since 1967," wrote UNCTAD. The Israeli assault, called Protective Edge, coupled with others in 2008 and 2012, "shattered its productive base, left no time for meaningful reconstruction or economic recovery and impoverished the Palestinian population in Gaza, rendering their economic well-being worse than the level of two decades previous."

In July, the chief of the UN's Relief and Works Agency said none of the more than 12,000 houses totally destroyed during Protective Edge had been rebuilt.

The combined effects of isolation, a lack of resources, and an economy that is beaten down by war every few years have led "accelerated de-development" in Gaza, which the UN defines as "a process by which development is not merely hindered but reversed." The only thing growing in Gaza, said the UN, is its population, which is expected to rise from 1.8 million to 2.1 million by 2020.

Years of extraction from a coastal aquifer has also left Gaza's water supply dangerously depleted. Salt water and the remnants of 33 million cubic meters worth of wastewater dumped annually into the Mediterranean have also filtered back into the aquifer thanks to a low water table, and 95 percent of the remaining water is reportedly undrinkable without treatment. 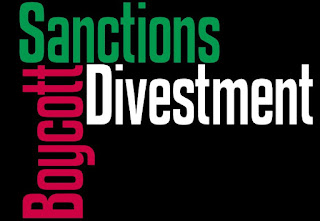 Justin Trudeau is so far up Netanyahu's ass that one of his government's first acts was to throw their support behind the Tories' motion to "condemn" Canadians who - because of Dahiyeh, because of this carnage, because of this slow-motion ethnic cleansing - joined the Boycott/Divest/Sanction or BDS movement. Oh my Loki, that was the height of anti-Semitism.

A lot of Liberals still imagine theirs is the party of Laurier, St. Laurent, Pearson and Trudeau. No, sorry. You're the party of Michael Ignatieff, Stephen Harper and Justin Trudeau. Different party altogether. It's a more straight-up commercial party, one that has been purged of all that messy progressivism, principle, integrity and conscience. You are definitely something else altogether.

Your first and last paragraphs are telling.

As long as the main priority is licking the boots of those who occupy the Oval Office and corporate boardrooms then basic morality doesn't stand a chance.

The USA support Israel because of the religious right.
They are organised and have deep pockets.
They are also extremely dangerous politically.
We are beginning to see the formation of a USA theocracy it's coming ever faster .
I doubt that Canadian support for Israel is anything more than placating the USA.
Let's be honest , there is no such thing as punching above your weight!