When You Add It All Up, What We're Doing Doesn't Make a Lot of Sense. 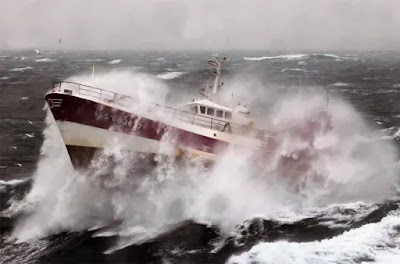 Oceans make up 70 per cent of the planet's surface but they absorb 90 per cent of the heat emitted by global warming. The remaining 10 per cent is carried in the atmosphere, the metaphorical tip of the iceberg. Those same warming oceans are absorbing something else, a great deal of our CO2 emissions. When the two are charted they look like this: 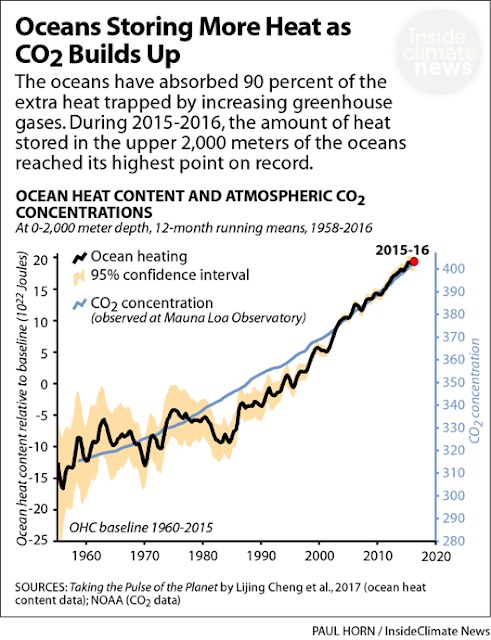 Our focus is rarely on the oceans. We look and measure and opine about what's going on in the atmosphere, what are the greenhouse gas levels up there, how much hotter are we getting here on dry land. They oceans, their heating and acidification issues, they're largely out of sight/out of mind. You won't hear our prime minister or our premiers arguing that we must reduce the acidification of the oceans, that we must stop pumping ever more heat into the ocean depths.

Wouldn't it be great if the oceans just ate up all that absorbed heat, if they simply made it go away? That's not the case. The oceans are instead a repository of that heat, a place where we have stored the bulk of our global warming. There's this thing, the first law of thermodynamics that trips up any wishful thinking. It's sometimes called the law of conservation of energy. The idea is that energy can neither be created nor destroyed. It can, however, be transformed into different things: heat energy into kinetic energy into potential energy, that sort of thing.

The point is that heat isn't going to vanish. It's down there until it finally comes up to the surface and is returned to the atmosphere. Changes in prevailing surface winds have a big role to play in that. Those winds pumped a lot of that heat energy into the oceans and as they change, which they do, they may pump a lot of that heat energy back into the atmosphere. What goes around comes around sort of thing.

I'm not going to get into ocean acidification. That's way too dark for a Friday. If you insist, you can read more here.

So what's the point of this post? It's to recognize that the approach being taken by our prime ministers and our premiers is a political approach, not a scientific approach to global warming/climate change. They're trying to address one part of the problem, an important part to be sure but just one part. The stuff they're leaving out is vastly greater and far more dangerous than the portion that they're promising they will eventually, for sure, possibly deal with.

All these other forces are now in play: ocean warming, ocean acidification, natural feedback loops triggering the release of ancient methane and CO2 from the loss of the tundra and thawing of the Arctic permafrost, the slowing of major oceanic currents (heat conveyors), the broken hydrological cycle and the increase in atmospheric water vapour, the loss of albedo (ice caps, glaciers), our increasing overpopulation, our increasing exploitation of finite resources at wildly unsustainable levels. With all this and more going on, our response is carbon pricing and, in Canada, even that's far, far from a done deal.

Ever get that feeling that we're just dicking around, moving our food around our plate to make it look like we're eating?

I have mentioned on at least three occasions as comments to your blogs about the condition of especially the Atlantic Ocean. You have forgotten to mention in your recent blog, the Atlantic Ocean produces 70% of the oxygen we breath; rain forests produces 28% and the Pacific produces the rest. The Atlantic Ocean produces this amount because of the Phytoplankton (a microscopic plant that form the base of the ecosystem) found in it that is not found in the Pacific. This fact is what needs to be mentioned when talking about the environment...it might make a difference if it is said to a person at least 10 times. "How Can We Make People Care About Climate Change?"
Norwegian psychologist Per Espen Stoknes has studied why so many people have remained unconcerned about climate change. In a Yale Environment 360 interview, he talks about the psychological barriers to public action on climate and how to overcome them.https://e360.yale.edu/features/how_can_we_make_people_care_about_climate_change

Anyong, where do you get this idea that I'm here to write copy for you? I'm not.

We've had this business before. When you come up with this 70% oxygen business you keep ignoring the vast southern ocean and the role it plays.

Go back and read the post again, this time with a bit of care. It has nothing to do with oxygen generation. It deals with ocean acidification and ocean warming. It deals with the inadequacy of the approach and actions of our politicians.

Do yourself a favour. Start a blog. It costs nothing. Write about whatever you like to your heart's content. But please realize you don't set the agenda here. This is not some co-op.

Once again, Anyong, I've checked out your nonsensical claims. Yes, the world's oceans do contribute 70 per cent of the oxygen in the atmosphere. That's over more than 3.6 million sq. kms. of ocean of which the Atlantic at 106 is well under a third. How bloody foolish is it to claim that the remaining 2.5 million sq. kms. of oceans - the Pacific, the Indian, the Southern and the Arctic somehow don't contribute substantially to that 70 per cent. Yet you keep coming back and parroting this same nonsense. Yes, I ignore it - because it's nonsense.

Do you ever smile or tell a good joke?


Anon 3:49. I do. Relentlessly. Just not on this blog and definitely not with anonymice. I smile and joke and do random acts of kindness with many people I don't even know but always to their faces. If you want jokes there are endless sites at your fingertips if you do a Google search.

Trailblazer. We're having the same thing in the north Pacific. A good example are the grey whales that once had their feeding grounds in the Bering Sea now having to migrate further into the Beaufort in search of their traditional prey fish. They're not used to the extra travel and appear somewhat emaciated when they again transit south to their birthing grounds.