If the Boot Fits, Wear It. 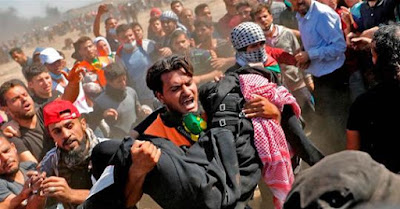 Israel didn't act alone yesterday when its snipers slaughtered 58 unarmed Gazan protesters and wounded another 1,300. Trump, being the truly vile snake that he is, blamed the killings and the mutilation on Hamas. After all, unarmed Palestinians must never protest within marksman range of the Israeli wire.

So there you've got Netanyahu and Trump, they're quite a pair. But, wait a second. Someone's missing. What about the Three Amigos? That would be Canada in right of its prime minister, Justin Trudeau, Israel's other faithful ally.

What is Canada going to do about this seemingly endless murder of unarmed Palestinians? Apparently we're going to look the other way and ignore it.That's the Justin way. If he's really feeling the heat he'll probably call on both sides to stop murdering each other and sit down to negotiate or some steaming heap of horseshit along those lines.

If the boot fits, Justin, be man enough to wear it. It's not just Trump who is complicit in this.

The protesters were not unarmed. They were throwing rocks and firebombs at soldiers and trying to breach the border.

These Palestinian "protesters" could sure learn a thing or two from Gandhi and MLK about protesting!

They are effectively martyrs without a cause. They keep provoking armed responses from Israeli security forces. Then Israelis vote in hard-line right-wing governments for security. Then the US takes a hard-line approach defending Israel unconditionally. All this means they keep losing and losing despite whatever sympathetic press they get.

That's the problem today. The world is lousy with political fanaticism and polarized debate. The people are divided and at war. Nothing ever gets done. And the Deep State wins by default. That's how they do it!


Anon, you have got your head so far up your ass you're obviously having trouble getting oxygen to your brain. They were "throwing rocks and firebombs" - really? And just how far were they throwing those firebombs from inside the wire? Use your head, you moron. How fucking far can you throw a firebomb? And, by the way, how many Israeli soldiers armed with sniper rifles did they immolate? How many did they smite with stones? What's that, none? Not one. Not even singed. You've abused the privilege of stupidity and wandered off into the swamp of contemptibility.

By the way, fuckwit, Gandhi and MLK were not targeted by platoons of snipers. Take your alt.right garbage somewhere else. Go away, your kind makes me sick.

Peaceful protests typically don't warrant an armed response because it makes for really bad press. It's about winning over the hearts and minds of the people. Like how MLK and Gandhi succeeded.

Instead of bringing rocks and firebombs to a gun fight, better to bring protest signs. Sing hippy songs. They might want to shoot you. But they won't be able to!

The Palestinians might even accomplish some their policy objectives. It's time they stopped throwing good money after bad. Get with the program. Gandhi paved the way.