When You're Trying to Get Out Of a Hole... 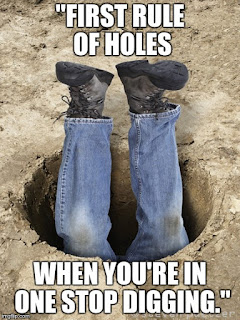 It's that old adage - when you're trying to get out of a hole the first thing is to stop digging. You don't make the hole even deeper. You don't make your own job that much harder.

Let's up the ante. What if it was either get out of that hole or die? That would give you a bit more incentive to put down the damned shovel. Or at least it should.

So what does this have to do with butterflies? Quite a bit


Global warming is on track to cause a major wipeout of insects, compounding already severe losses, according to a new analysis.

Insects are vital to most ecosystems and a widespread collapse would cause extremely far-reaching disruption to life on Earth, the scientists warn. Their research shows that, even with all the carbon cuts already pledged by nations so far, climate change would make almost half of insect habitat unsuitable by the end of the century, with pollinators like bees particularly affected.

However, if climate change could be limited to a temperature rise of 1.5C - the very ambitious goal included in the global Paris agreement - the losses of insects are far lower.

The new research is the most comprehensive to date, analysing the impact of different levels of climate change on the ranges of 115,000 species. It found plants are also heavily affected but that mammals and birds, which can more easily migrate as climate changes, suffered less.

We're really up against it this time.


In October, scientists warned of “ecological Armageddon” after discovering that the number of flying insects had plunged by three-quarters in the past 25 years in Germany and very likely elsewhere.

“We know that many insects are in rapid decline due to factors such as habitat loss and intensive farming methods,” said Prof Dave Goulson, at the University of Sussex, UK, and not part of the new analysis.

“This new study shows that, in the future, these declines would be hugely accelerated by the impacts of climate change, under realistic climate projections. When we add in all the other adverse factors affecting wildlife, all likely to increase as the human population grows, the future for biodiversity on planet Earth looks bleak.”

“We showed insects are the most sensitive group,” said Prof Rachel Warren, at the University of East Anglia, who led the new work. “They are important because ecosystems cannot function without insects. They play an absolutely critical role in the food chain.”

“The disruption to our ecosystems if we were to lose that high proportion of our insects would be extremely far-reaching and widespread,” she said. “People should be concerned - humans depend on ecosystems functioning.” Pollination, fertile soils, clean water and more all depend on healthy ecosystems, Warren said.

Warren said that the world’s nations were aware that more action on climate change is needed: “The question is to what extent greater reductions can be made and on what timescale. That is a decision society has to make.”

Well there's one thing Canada is not short of - decisions. We've decided (well, some of us have) that it's in our "national interest" to flood the world markets with the most toxic, high-carbon fossil fuel on the planet, bitumen, as much and as fast as possible.

We're going to keep digging that hole deeper, just as fast as we can. 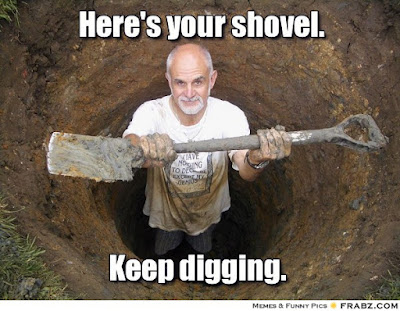 I think Justin Trudeau is case in point why nothing ever gets done on Global Warming. (Just check the stats. From them alone, you'd never know anyone on Earth was aware GHG emissions are a problem.)

Prince Charming creates an image of being ultra-progressive trolling conservatives with identity-politicking nonsense – all the while condemning the use of identity politics.

But his real agenda is to flood China with bitumen. The ID politics are just a distraction. Bait and switch.

He touts the Paris Agreement while having no plan to reduce GHG emissions – which just goes to show the whole thing is a fraud.

Elites like Al Bore want to gouge the little people with carbon taxes – while exporting all the GHG emissions to undeveloped countries that have no regulations via free-trade globalization.

Global Warming is certainly a problem. Maybe people should stop acting hysterical for 5 minutes and give some thought to what the solutions might be.

The most sensible plans I've come across include green tariffs and phased-in subsidies that gradually, over a couple decades, make renewable energy via the electricity grid cheaper than fossil fuels. Make the rich pay instead of letting them polarize the debate, divide and conquer and continue to profit from dirty energy (while pretending to be champions of the environment.)

Anonymous said, "The most sensible plans I've come across include green tariffs and phased-in subsidies that gradually, over a couple decades . . . "

That would have made sense back in the 1970s when I first learned about global warming. We have spent the last fifty years doing diddly squat about it. When I hear people advocating phased in plans and such I assume they mean more indefinite delays.

No matter which way you slice it, you have to bring emissions to zero over a couple of decades. By 2040 or 2050. (That's what phony emissions reducers like Germany are bragging about. But in reality they are just unloading them to the undeveloped world via free-trade agreements.)

Carbon tax plans are, at best, a gamble. From 2003 to 2008 the price of oil increased by 200%. Effective 200% carbon tax. Global GHGs grew at an accelerating rate. (The historical curve is exponential. As if not a single thing has been done. Because it hasn't.)

If you tax the rich and make them pay it's guaranteed to solve the problem. Because once green energy becomes cheaper than dirty energy, emissions go right to zero. Problem solved. (Green technology development could make that point happen even faster. When big money is invested, prices come down.)

It is possible to tax the rich. Under Eisenhower – a Republican WW2 general – the top tax rate was 90%. Tax cuts for the rich only create exponential growth of inequality. Since Reagan the wealth of the richest has grown 2400%. (According to Warren Buffet.)

This means the rent the people pay the rich (for sitting atop mountains of money) has drastically increased as well. Which is why we live in a gouge-economy with mountains of debt everywhere. This inevitably leads to economy collapse. Last time it happened, it plunged civilization into world war.

So if you go from accepting nothing as something to betting on all or nothing you still wind up with nothing. (Welcome to the Machine.)


Anon, I think there's a lot of truth in what you say. Taxing the rich is a fine idea but where are you going to find a government with the will, courage or interest to take that step. After the last Republican tax cuts, Canada's most affluent began grousing that Canada wasn't "competitive" because we haven't offered our richest a similar deal. We have nudged the upper bracket taxes a bit but not remotely in the range that you're suggesting.

Here's something else I'd like you to consider. Governments are going to need a lot of money, in Canada a trillion dollars by some estimates, to replace and upgrade infrastructure that was never designed for today's harsher conditions in the Anthropocene.

Do you think we should - and realistically could - tie taxation to both purposes, i.e. reduce carbon output (mitigation) and upgrading infrastructure (adaptation)?

If you put that sort of multi-multi-billion dollar millstone to the price of fossil fuels, surely that would burst the carbon bubble.

As it now stands there is an estimated $27 trillion dollars in proven fossil energy reserves subscribed on the stock markets and bourses of the world. A lot of banks, pension funds and institutional investors are up to their up to their necks in fossil fuels. Again we have the danger of bursting the carbon bubble. So, what then?

Yes the government should use all tools at its disposal to produce a comprehensive, developing, course-correcting environmental platform: wealth taxes, carbon taxes, carbon tariffs, green subsidies, "means-tested" rebates and, of course, regulations.

This is nothing revolutionary. Just plain-old, centrist, post-war, "New Deal" government and management of the economy. If you look to the history books, you can see that it IS possible to get things done.

For example, the Pearson/Douglas government in the 1960s that created most of the social safety net. (Wiki Lester B. Pearson. Just look at all his accomplishments in 5 short years. Unbelievable! Hard to believe that leaders like that once existed.)

According to economic principles, public benefits are supposed to grow with the economy (i.e., GDP.) They once did. They won't, of course, when Robber Barons are hogging all the wealth produced in GDP growth – and getting people on the hook for mountains of ubiquitous debt.

In short, no need to reinvent the wheel. Simply a return to the sensible and the moderate and the tried-and-true after decades of reckless pretentious ideology, upper-class excesses, outrageous corruption and, of course, economic catastrophe.

The dirty-energy industry will be phased out over decades. So no assets will be stranded. But clearly this is not the time to 'get in low' on dirty energy.

One can only pray that Trudeau does not put taxpayers on the hook by defrauding the CPP Investment Board into building his filthy BC pipeline. (Or should I say the bribe-payers' filthy pipeline? Why else would someone, who once rightfully called Fake Environment Minister Peter Kent a POS in HOC, fight for this goddamn pipeline?)

If the Athabasca Oil Sands becomes BlockBuster – becomes T Rex – then Albertans will just have to adapt to the market place or die not trying. I think they would lead more meaningful, fulfilling lives doing something other than digging holes in the ground and collecting resource-welfare checks over something that's clearly rotten. Something that's character building – which would appear to be in short supply in the present.

I don't think climate change is really going to kill that many insects. It seems pretty clear pesticides are getting them first.