Even the National Review Is Throwing In the Towel On This One. 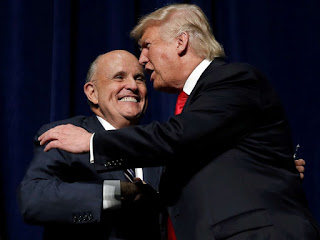 There aren't many more reliable rightwing publications than The National Review. Which is why it's worth noting when the Review throws in the towel on Donald Trump and his sidekick, Rudy Giuliani, the dynamic duo that Digby calls, "a pair of aging New York goons."

Former US prosecutor, Andrew McCarthy, writes that Trump is now neck deep in a mess of his own and Giuliani's making.


The news reports write themselves: hush money before the election, the implausible denials of the conduct, the implausible denials of knowledge about the payment, the specter of cheating on Melania right after the birth of Barron Trump, Stormy’s allegation of an extortionate threat, the laugh-out-loud details of the non-disclosure agreement (Trump as “David Dennison” and Stormy as “Peggy Peterson”), and so on. It thus seemed to me that the best course was to say as little as possible; amend the campaign-finance disclosures; try to settle the civil litigation with Ms. Clifford in California (the story is out now, so what’s the point?); hope the Trump Justice Department, relying on the Obama 2008 precedent, would agree to a modest FEC fine to settle the matter; and try to move on, drawing as little attention as possible to this tawdry tale – understanding, of course, that the media would try to keep it front and center.

Instead, Trump is fighting. The mini-mess is becoming a maxi-mess.
Rudy Giuliani (who hired me as a prosecutor in the Eighties) clearly took Sean Hannity by surprise Wednesday night. He admitted that Trump reimbursed Cohen in installments over a number of months. This blows up both Trump’s story that he did not know about Cohen’s payment to Stormy and Cohen’s story that he did not tell Trump about it.

Yes, those stories were risible on their face, and it was only a matter of time that they’d be exposed — indeed, as some commentators have noted, it is probable that federal prosecutors in Manhattan already knew that Trump had reimbursed Cohen. Rudy was trying to get out in front of bad news that was going to break anyway.

...While there are problems (which we’ll come to) with Rudy’s legalistic defense, Trump’s tweets go much further, appearing both to deny the sexual encounter and to threaten Clifford with robust enforcement of the NDA – a heavy-handed arrangement in which, in exchange for the $130K, she faces millions of dollars in penalties each time she spills the beans.

This seems crazy to me. No one believes the “affair” didn’t happen. And, because everyone knows who Trump is, no one much cared about it . . . until now. Now there will be wall-to-wall coverage to prove it happened, including coverage of Trump’s flings and interactions with women over the years (some of which are alleged to involve unwanted advances), until he admits it. If he does, he will look terrible for inducing Stormy to sign a false denial letter and for relying on it. In the meantime, he will look terrible for appearing to threaten Stormy with the punitive NDA damages, which will lend credibility to her thus far uncorroborated claim that, in 2011, an unidentified man threatened that she would be killed if she did not keep quiet. And the cherry on top: Trump’s tweet calls renewed attention to the NDA. While such agreements may be “very common” as Trump says, how “very common” is it to do them under silly pseudonyms instead of the parties’ real names? That question, as night follows day, will lead to more media discussion of the fact that Cohen used the very same pseudonyms in yet another hush-money arrangement with a major GOP donor and Trump supporter.

...None of this stuff is the crime of the century. None of it is in the same league as tales of Russian espionage and obstruction of high-profile FBI investigations. But, as legal commentators and Trump critics are quick to point out, it is a felony punishable by five years’ imprisonment to make false statements or material omissions on government disclosure forms. And the harder you fight against small stuff, the bigger it appears if your story collapses.

I already miss the quiet calm of the Mueller investigation.


Americans keep teaching themselves the same lesson and never learn it: it's the cover-up that gets you, not the crime. Even King Donald and Cardinal Rudy don't get it.
Posted by The Mound of Sound at 10:15 AM

It's been obvious for awhile that Trump doesn't know how to govern. It's now painfully obvious that he doesn't possess a lick of common sense.

What, you mean the former mayor who placed New York's emergency services HQ in the base of the WTC after the 1993 bombing when it became apparent that the building was a prime target doesn't make good decisions? Shocking.

Let's not forget, however, that EVERYBODY loved "America's Mayor" after 9/11 despite this complete screw up--even faux liberal sellouts like Hillary Clinton and Chuck Schumer.

Owen Gray said, "It's now painfully obvious that he doesn't possess a lick of common sense."

It is also painfully obvious that a large contingent of the American people doesn't possess a lick of common sense. Add to that, the Democrats don't seem to be using the time to re-engineer the Party. Americans will face the next election with the same idiocy as the last one.

Add to that, the Democrats don't seem to be using the time to re-engineer the Party. Americans will face the next election with the same idiocy as the last one.

I have said for some time and say it again.
The ghost of Hillary Clinton could well be the downfall of the ( nearly as corrupt) Democrats in the next USA election.

Needless to say ; the billionaires will fight the multi millionaires in the next USA election.

The UK has similar problems and Canada is giving it a good shot!!

Within the Anglophile countries 'democracy' is on life support.
Not to say that democracy is the cure all!

I am so much in agreement with you, that I feel sick to my stomach.
I'm nearly 80 and have voted in every election that I was eligible since I was 21 (couldn't vote before that age) and I can tell you I am having great difficulty figuring out who is the LEAST offensive person to vote for. And yet, I am committed to exercise my right to vote!
What to do........

Does none of the above qualify as a vote?
Or is it an easy way out of a difficult problem?


I've read all your comments and there's not much to disagree with, even less to add.

Yes, "none of the above" is treated as a vote, a spoiled ballot. The spoiled ballots do send a message to the parties that there are people willing to show up at the polling station who want something better.

Me, I vote Green knowing what that means. I succumbed to the strategic voting pressure once but I'll never do it again. Negative voting is a con. If I mark the ballot Liberal or NDP they'll assume that I support their platform when I don't. I'd rather vote for a party and that party has been, for some time, Green.

The Mound of Sound said, "Me, I vote Green knowing what that means. I succumbed to the strategic voting pressure once but I'll never do it again."

Agreed. The other parties are stuck. We need a new vision.
The only political party not afraid to tell the truth about climate change is Green.

So what Fake News story is most absurd?

This is why Americans elected Trump. Democrat neoliberals stand for nothing but empty words -- half of which are nonsense.

And their neoprog pets are silly fanatics bearing no resemblance to real Progressives like Theodore Roosevelt, FDR and Eisenhower.

My bet: Trump is going to do "bigly" during the midterm elections. No crash-and-burn like Billy Goat and Obomba.

(Of course, I was wrong on the 2016 election. Thought Fake News flying monkeys had weaseled HRC the election for sure!)

BTW: be sure to "vote" Green. It doesn't matter. Canada is a Fake Democracy -- thanks to the NDP and Greens burning Junior's arse on electoral reform!

Ha-ha, pretty funny when you think about it! They welcomed the boot of FPTP back upon their throats with pride. Take that! Take our votes and our seats! That will teach ya! (Like I said, silly self-defeating fanatics.)

Before they didn't deserve it. Now they do. I hope they enjoy the fruits of their labor. I know I'm going to!


I read your comments, Anon, and you left me wondering what planet you're really from. Relax, mom will have Sunday dinner ready pretty soon and she'll be calling you to come up from the basement. Hmmm, dinner.

In my neck of the woods Paul Manly was screwed over by the NDP and became a Green.
A bright lad is Paul but he seems to have left the stage with Elvis.
Politics within politics brought him down as his father was spotted delivering,with others, medical supplies to Palestine and oops! as fast as you can say anti Semitic he was gone.
We are , perhaps, denied the best candidates by an establishment with it's head up it's arse?