In Most Countries This Might be Disturbing News. In Canada, Not So Much. 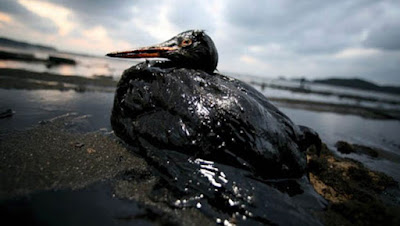 The Trump regime has joined forces with the fossil energy giants in fighting American cities over climate change.

Just before a critical hearing to determine the fate of a pair of climate lawsuits in California, the United States government has weighed in as a heavyweight ally on the side of the fossil fuel companies.

Lawyers from the Justice Department's Environment and Natural Resources Division filed a friend of the court brief last week in support of five of the world's largest oil and gas companies, which are seeking to have lawsuits by the cities of San Francisco and Oakland dismissed.
U.S. District Court Judge William Alsup is scheduled to hear arguments on Thursday on a motion by the companies to throw out the cases.

Federal lawyers argue in their brief that if the two lawsuits succeed, it could stymie domestic and international energy production.

"The United States has strong economic and national security interests in promoting the development of fossil fuels, among other energy resources," according to the 24-page brief filed May 10.

The brief cites President Trump's March 2017 Presidential Executive Order on Promoting Energy Independence and Economic Growth, suggesting the fight being waged by the two cities against the companies runs counter to the administration's support of unrestricted fossil fuel development.

BFD. The province of British Columbia and its municipalities get the same treatment from Justin Trudeau and premiers like the soon to be former premier of Alberta, Notley. They jump in with the fossil fuelers whenever some objection is raised in British Columbia to their pipelines.

How does what Trump is doing differ significantly from what we're experiencing from the Dauphin and his coterie? They're birds of a very greasy feather.
Posted by The Mound of Sound at 11:17 AM

We elect someone to represent us and they go to Ottawa and then tell us that we are out of step. It's been common practice for a long time. In the early days of the Reform Party Preston Manning made a big thing about his MPs representing their respective ridings which was a very attractive feature which died shortly after he was elected.


I don't think it was an "attractive feature" Toby. I lived in North Van at the time and we had a little garden gnome of a Reformer as our MP, a guy from New Zealand if I recall.

This goof tried to take "the pulse of the riding" to decide how he would vote on legislation. The problem was that people in the riding often knew very little about issues. That was the basis of electing a representative to go to Ottawa whose job it was to learn about the issues and cast an informed vote accordingly. The approach he took was more akin to mob rule.

It was very attractive to me, Mound. At the time I lived in a northern riding and we had some serious issues which our incumbent MP completely ignored while trying to sell us on Party programs which might have made sense in Canada's big cities but not in our remote area. There has to be a balance in there somewhere.

What I'm getting at is that some issues can be 100% reversed in different areas. Right now we are seeing a classic with BC and Alberta Premiers on opposite sides of the pipeline issue. Would you want Horgan to represent Alberta or Ottawa instead of BC?

.. 'whipped' MPs reflecting Party Policy and not the ridings infuriate me. It makes me think in reality we are voting only for our favorite hockey sweater. Those MP's should holding open town halls, collecting opinions in their respective ridings. I see the barf the likes of Poilivre spews and cringe. These folks sit in their caucus rooms and work out their attack ads.. instead of reviewing the dreams, needs and wishes of their ridings. BC is not PEI, Quebec is not Ontario, Alberta is not Nova Scotia. Ottawa should not be deciding if BC lumber goes to China, Ottawa failed the east coast fisheries, Ottawa failed praire wheat farmers. Ottawa continues to fail BC's wild fisheries which employ far more people than pipelines or fracking. It just goes on and on.. but that's captured government for you.. doors wide open to lobbyists & political donors.. but not to you or me.. but vote for us, cuz we're the best steady hand on the tiller.

The whole 'world class' 'oil' spill cleanup is a bag of garbage. Worse its a red herring to keep Canadians from wondering about the tar sands tailing 'ponds', the vacated worn out wells and the ongoing thrashing of Environment via fracking. Alberta intends to just kill its environment for royalty $ & Ottawa wants its piece of the easy money.. which is dick right now.. and claiming economic growth and jobs jobs jobs is just the hype for votes..

Can't wait for Jason Kenney who lives with mommy gets into being premier.. its to laugh. What's the most recent estimate of the clean up bill? I believe it ranges from minimum 250 Billion to a Trillion.. just re dead but methane leaking oil wells.. and any wild ass guess re the tar sands is added in there.. a Supreme Court is underway considering bankruptcy priority.. aka who pays? The foreign owned company or kicked down the road to Canadian taxpayers or cleanup will never ever happen.. but the buffalo will roam