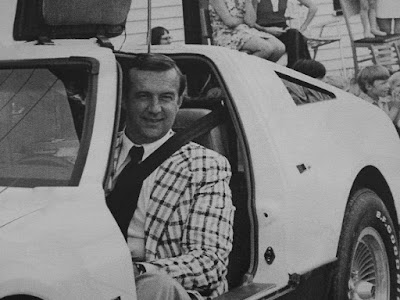 As Michael Harris puts it, "When companies with iffy projects begin to lose their nerve, they can always turn to government — the investor of last resort. History shouts as much from the leaky rooftops of multiple mega-flops." He's referring to - of course - the Trans Mountain pipeline.

The first person to invest in Malcolm Bricklin’s eponymous sports car was then premier Richard Hatfield of New Brunswick.

The car came gull-winged for the gullible. After producing just 3,000 cars, the pipe-dream of an American millionaire died as a costly fiasco to Canadian taxpayers.

...Former Newfoundland premier Brian Peckford invested boots and all in the now comical Sprung Greenhouse. He was trying to corner the market on English cucumbers in a place with one of the lowest levels of sunshine in the world.

After a predictably short history, which mostly amounted to dimming the kitchen lights in Mount Pearl every time the greenhouse fired up, Sprung left the province. Newfoundlanders were left holding the bag for the most expensive cucumbers on earth — a whopping $30 million loss.

And so, the case for caution with Kinder Morgan, the Texas oil company with cold feet. With one toe in the water of the Trans Mountain pipeline expansion and one foot on Texas terra firma, the company is threatening to walk away from the $7.4 billion deal.

The federal cavalry, under the command of Gen. Trudeau, is trying to ride to the rescue. That is passing strange. This is the same Trudeau who dissed the Harper-era green light to Trans Mountain, declaring in 2015 that approval for the project needed “to be re-done.”

...If there is money to be made, an investor can always be found. If the project runs with the dogs, government should not take out the national credit card to feed it.

There are already signs of how Trudeau hopes to get cash to Kinder Morgan. One place would be the Canada Pension Plan Investment Board, which sits on a fund of $356 billion as of last March.

But why should Canada’s pension fund invest in a high-risk venture like a bitumen-carrying pipeline that cuts right through Canada’s third-largest metropolis?

Why would the CPPIB risk pension funds on pipelines, when a growing number of banks internationally won’t touch tar sands projects?

Why would the agency put money into a wave of the past, at a time when the rest of the world is transitioning away from fossil fuels — and we were supposed to be among them?

Why should the CPPIB touch Kinder Morgan when surging shale production in the United States is set to produce 11 million barrels of “clean” oil a day by the end of 2019? The Americans are already poised to hit the 10 million barrels per day threshold this year.

If Trudeau is truly desperate to get this project rammed through, here is something to watch for. He might turn to the Canada Infrastructure Bank (CIB), that sketchy, new institution designed to champion so-called public-private partnerships, or P3s.

Interestingly, the new CEO of the CIB is Pierre Lavallee. He spent six years at the pension investment board, where he managed assets worth $94 billion. The new bank has yet to invest any of its $35 billion fund in a single project, though its enabling legislation has been passed.
How long can it be before the telephone rings? “Mr. Lavallee, it’s Mr. Morneau on the line.”

If the CIB invests in Kinder Morgan, it will instantly persuade the new bank’s critics that it is merely a giant slush fund for pet Liberal projects. Trudeau inspired much of the caustic reaction to the new bank himself. The way that the bank was created was shamelessly Harper-esque — buried in a 300-page omnibus bill, with only two hours in committee for opposition parties to study and amend it.

Maybe Trudeau knew his adventure in P3s, which he admittedly promised in the 2015 election, couldn’t stand up to much scrutiny. Ontario Auditor General Bonnie Lysyk found that P3s in that province cost taxpayers an extra $8 billion. And if she has it right, it will get much worse.

And what about the Saudis?


And there is one more reason Trudeau should not commit taxpayers’ money to the Trans Mountain pipeline expansion — through the CPPIB or CIB. Though rising oil prices have recently made some tar sands operations marginally profitable, those prices are highly volatile and likely to come down. The reason is Saudi Arabia.

The kingdom is on the cusp of selling shares in Saudi Aramco, the world’s largest and most profitable oil company, with an estimated worth of $1.5 trillion U.S. Though no date has been chiselled in stone for the IPO, the Saudis are now saying sometime in 2019.

Whether it’s listed internationally or sold privately, the sale could be a global game-changer for the oil industry. With five per cent of the equity of this resource behemoth potentially on the table, it is hard to imagine how that would not siphon off investment from riskier Western energy projects that depend on high oil prices to be viable.

And those prices could dramatically plummet if the Saudis decide that it is in their interests to turn on the oil taps again [which is in the works]. That would bring down the price of oil, allowing the kingdom to recover markets lost to shale gas and tar sands operations, while the Saudis were building the price for a potential IPO by cutting production.

Some other reasons energy investors might prefer Riyadh to the land of tar sands? Dirt cheap production costs, no court cases, and no environmentalists: just the king and his buddies.

What does Trudeau hope to gain from all of this? He sure looks to have swallowed the magic pills.

Does Kinder Morgan Canada have the $7B? No
Will costs rise above $7B? Certainly.
Has KM sold out transit contracts? No , they have 1/3 capacity uncontracted.
Are the banks willing to finance TM? No ; they are in for only $5B.
Is KM attracting investors? No.
Is this project a money pit? Yes.


I was interested to learn that the Chinese have stopped giving 15-20 year contracts. The best a pipeline company can get these days is a 3-year deal meaning the Chinese can simply walk away at that point or "renegotiate" their terms.

KM won't show its order book and that's probably for a reason. That reason is probably the same one that has them trying to offload this pipeline on the feds or Alberta. Prime minister Sunny Ways has his tits caught in the wringer but Rachel Notley has the sword of Damocles over her head. Those are the people calling the shots on our side. Doesn't that instill confidence?

I actually feel bad for Justin because he's been so badly mislead on this file.
Kinder Morgan doesn't even want to be in Canada any more, given the variables and wild cards that will still face them, even if they came to an agreement by May 31.
This is another 'turd blossom' left behind by Stephen Harper (in addition to things like Phoenix).
Once it's done, the whole country can move on, independent of the traps left by the previous government and influence of multinational companies.

History is full of examples where gullible investors sunk their life savings into soon to be extinct projects. Here we go again.

Anonymous Anonymous said, "I actually feel bad for Justin because he's been so badly mislead on this file."

If Trudeau had stayed with the policies he campaigned with he would not be in this mess.