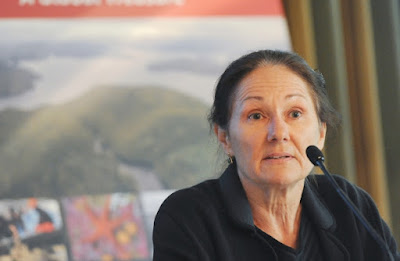 She's the bane of the Oil Patch and every greasy, dishonest petro-politician in Canada, Justin Trudeau and Rachel Notley very much included.

Robyn Allan is a force to be reckoned with. She's had a distinguished career as an economist. She has been President and CEO of the Insurance Corp of British Columbia, VP-Finance of Parklane Ventures and Senior Economist of the B.C. Central Credit Union.

Allan has also been a burr under the saddle of the fossil fuelers and their political minions determined to ride roughshod over the province of British Columbia. She was a regular intervenor before the industry-rigged National Energy Board and, in keeping with the pattern of captured regulators, she was routinely ignored.

A vigorous critic of the Trans Mountain pipeline, Allan has been warning both the federal government and its regulator that Kinder Morgan's numbers have been cooked.


I advised the NEB that project financing was compromised. The NEB ignored the warning. It even reviewed a stale-dated project. The board stuck with a $5.4-billion cost, citing this in its May 2016 report, even though Kinder Morgan announced in October 2015 costs had increased to $6.8 billion.

In March 2017, costs rose again to $7.4 billion — 40 per cent above the initial estimate. By this time, U.S. private capital markets had summarily rejected the expansion. Kinder Morgan was unable to raise debt or equity, and no joint-venture partner could be found. U.S. investors saw the writing on the wall.

Kinder Morgan turned its attention to the Canadian government and capital markets. The company acknowledged its search for financial support from the Canada Pension Plan and the Infrastructure Fund.

KMI then announced the Canadian entity would be responsible for raising all required project financing, although the U.S. parent still held 70 per cent ownership. No update on negotiations with Ottawa was forthcoming.

The foreign parent had effectively washed its hands of all financing responsibility while retaining the majority of any benefits for KMI’s U.S. shareholders.

But that’s not all — before construction, even more equity will be required. Kinder Morgan is not up-front with escalating project cost. Instead, the recent ultimatum states: “KML is not updating its cost and schedule estimate at this time.”

Why not? If there were any time the Canadian public has a right to know the cost of tearing the country apart, it is now. Especially since taxpayers are being set up to pay for it.

Given Kinder Morgan’s clever cost-obfuscation strategy and the contracts that are yet to be finalized, direct project costs could exceed $9 billion.

Negotiations behind closed doors with desperate politicians whose behaviour suggests they lack the business acumen to know project costs before they commit to them puts all Canadians at serious financial risk. Either that, or Trudeau’s government is complicit in hiding project overruns to rationalize a taxpayer-funded bailout for a project that sank long ago.

h/t Trail Blazer
Posted by The Mound of Sound at 11:20 AM

We are being hosed by big corporations with the approval and collaboration, even cheering, of our political elite. That's corruption.

Worst case scenario: KM is under reporting its numbers by double the total costs.

Most likely scenario: costs have been under-reported anywhere from 30% to 50%.


The problem with your best case scenario, Troy, is that KM's numbers have not been accurate. They started off with 5.4 billion, then 6.8, now 7.4, tomorrow, who knows. They've been playing fast and loose with their numbers from the start. What else can we expect from the bastard child of Enron?


BTW, Troy, are you related to Mary Thomas?

.. she is a superstar..
We got a few in Canada
but she is one of them..
Makes Harper look like an idiot
and Trudeau best not contest her

Yeah, Mary Thomas is my grandmother on my stepfather's side.


I've read she was a great educator. That came when I realized I knew very little about your Secwepemc nation. When I came across mention of Mary Thomas I just had to ask. Was she an influence in your life? From what I've learned from you over these past years I'm left with a hunch she might have been.

For those of you who have read some of Troy's contributions to this blog over the years, here is some background on his grandmother, Mary Thomas. An incredible life story.

My grandmother straddled a number of lines: she was somebody who understood the ways which the earth was changing under her feet, because she remembered it as it had been; she also retained her teachings from her own parent and grandparents, but had observed these teachings decline as she grew up.

She was a great observer, and was able to relay her observations to the people she spoke with through patience and repetition.

She was a storehouse of old Secwepemc knowledge. It'll take generations to relearn what'd she'd already known that has been lost upon her passing.

It's not the words you pass along to the next generation, but what you do. That's the Secwepemc understanding. You speak once, and then you show it, over and over. You get the learner to do the thing you're teaching. It's similar to how medical students (and now apparently law students) learn at Harvard, or how the old Chinese Confucianists used to teach their students. That's how my grandmother tried to teach those who would listen to her, but she lamented she didn't have enough time.

Another Secwepemc teaching she often exhorted, over and over, was the principle of consensus. Everybody gets a say. Consensus is built, and then decisions get made.

She also spoke of all life as being connected: the trees, the earth, the water, the insects, the animals, and the people. There's no true dominance, there's no dominion over any one sector of life. If you take, then you need to give back. If you give, then you need to take. It's... thermal-dynamics as a philosophy. Everything in balance, and when balance is thrown off, then it'll all come back on you eventually.


I read your comments a few times, Troy, and I'm left wondering if there wasn't a time when everyone knew those things. Probably not. We were organized differently and for different purposes in European history. Direction, not wisdom, came down from above and damn little was permitted to trickle up.

Almost from the time I started this blog I've argued the need to re-establish posterity in our policy and planning. That was almost entirely purged with the advent of the neoliberal order.

Even if there was some epiphany, a general willingness to embrace this wisdom, I'm not sure there's enough time left for it to take meaningful hold. Maybe that's just me being pissed-off lately.