The Fox and the Hen House - Trudeau Hands Industry the Keys 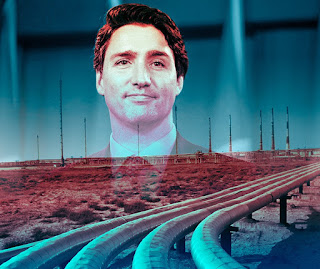 It's not unfair to say that, when the Trudeau government talks about balancing resource development and the environment you can expect a giant thumb on the scale. When the two interests clash, the environment comes away with the shit end of the stick.

Even by Ottawa standards, Tuesday’s meeting of the House environment committee was a long and rancorous affair.

Running more than 13 hours when it finally adjourned after midnight, the marathon session was the committee’s fourth and final day to vote on hundreds of proposed amendments to Bill C-69, the Trudeau government’s effort to overhaul Canada’s environmental laws.

Few are happy with the result, including scientists who say the bill puts too little emphasis on the scientific rigour and independence of impact assessments.

...The omnibus bill includes separate acts on impact assessment, energy regulation and navigable waters, and is intended to replace the controversial rewriting of federal environmental regulations under Stephen Harper in 2012. ...But experts say the weaknesses in the bill mean that it is unlikely to improve impact assessment or strengthen public trust.


“When you look at the actual legislative language, there’s very little change,” said Martin Olszynski, a lawyer and University of Calgary professor who was among the more than 100 expert witnesses selected to appear before the committee.

Given that none of those experts were research scientists, Prof. Olszynski opted to focus his ten minutes of testimony on adding language to the bill that would require decision-makers to adhere to principles of scientific integrity. An amendment to that effect was later introduced by Green Party Leader Elizabeth May and passed by the committee.

Yet even that step amounts to a half measure, said Aerin Jacob, an ecologist with the Yellowstone to Yukon Conservation Initiative. Dr. Jacob was among those who sought, unsuccessfully, to speak to the committee in an effort to strengthen the science underpinnings of the bill.

She said that while all persons involved in carrying out any part of an impact assessment should fall under the scientific-integrity provision, the amendment that the committee actually voted on only includes federal officials.

“By and large that’s not the problem,” Dr. Jacob said, since the data that support an impact assessment is typically gathered and interpreted not by government scientists but by private consultants paid for by industry proponents. “The problem is that the fox is watching the hen house.”

Petr Komers, a Calgary-based consultant, agreed that the bill does nothing to help those who are trying to provide a fair reading on the environmental impacts of proposed projects when they know that their clients are looking for a green light. “That makes our job really difficult,” he said.

Jonathan Wilkinson, parliamentary secretary for the Environment Ministry and a non-voting member of the committee, said that the government had considered but ultimately rejected a more hands-on approach to environmental assessments.

“The answer that we came to is it’s better for [industry proponents] to do the initial work, but of course government must have the resources and the capacity to effectively assess that work,” he said. “That’s the better way of doing it.”

Kai Chan, a scientist who specializes in environmental policy at the University of British Columbia, said experience suggests otherwise.

In a paper published in March in Environmental Management, a research journal, Dr. Chan and colleagues examined 10 recent assessments and found that assessors typically underplayed the significance of environmental impacts and sought to rationalize why projects should proceed. Government officials were unlikely to questions their findings, even for controversial assessments such as the Northern Gateway pipeline, which was later cancelled.

Dr. Chan added that stronger oversight and co-ordination of the assessment process by federal authorities would fix the problem. “It’s really a shame they were so quick to dismiss that,” he said.

Remember that we're talking about the Trudeau government whose own officials were caught out rigging the government assessment of Kinder Morgan's Trans Mountain pipeline.

Speaking on the condition of anonymity with National Observer, [senior federal officials] say a high-ranking public servant [a Harper government holdover, Erin O'Gorman] instructed them, at least one month before the pipeline was approved, “to give cabinet a legally-sound basis to say ‘yes’” to Trans Mountain. These instructions came at a time when the government claimed it was still consulting in good faith with First Nations and had not yet come to a final decision on the pipeline.

Legal experts interviewed by National Observer say these instructions could be a significant matter reviewed by the courts to determine if the government’s approval of Trans Mountain was valid.

The government would neither confirm, nor deny that public servants were given these instructions to find a way to approve the project. But it described the allegation as “unsubstantiated” information.

Elizabeth May contends it's not just the National Energy Board that's in the bag for the fossil fuelers. National Resources Canada and Environment Canada are also aboard the petro-train.


“I think NRCAN has become the Department of Oil and Gas and I think Environment Canada was converted under Harper from a public service agency to a corporate concierge service to speed along the approval of oil sands projects,” says [Elizabeth] May.

Nothing quite says "regulatory capture" better than letting the regulated industries provide government with the research and analysis on matters being regulated, especially when the government has its own internal fixers telling senior public servants what they need to report to their bosses.

If this skulduggery was Harper's doing, we'd be tearing him to shreds. But Stepford wife Liberals seem to prefer to look the other way when it's their boy doing the very same thing.

I was reminded today, as I watched a TV clip of Gregor Robertson and progblog's own Stuart MacKinnon bemoaning Vancouver's inability to collect $550K in cleanup costs for that Cypriot ship oil spill in English Bay three years ago, that the Feds operate with impunity and zero consequence of their actions. Municipality/First Nations concerns? Pfft. Who cares?, they think. Really. Deep down, bugger them.

Giant new project and new jobs? Who gets the extra personal income tax? Not those operating at the sharp end of politics. They have to put up with their overlords downloading shit on them with no consequence. Jurisdiction. Don't you love to have it if you're the provincial and federal boyos? Yessir! Bugger the mere prole-ish muni types. Let them collect extra from their denizens for OUR failures. Simple, it's jurisdictional so we're protected they must believe.

With three levels of government above him, the actual person on the street is triply screwed, almost by design. Jurisdiction is just another way of passing the buck and never really being held to account. Put people in a vicious circle if they have the temerity to actually complain. Telcos not using proper traffic safety rules on city streets? Too bad mayor, we're FEDERALLY regulated - take a hike bozo!

Buy up the Feds with flattery and lolly if you're big biz, get them to rig the assessment rules with assessment boards populated with members chosen from the brass ring old boys club (retired judges, emeritus profs, retired millionaires) offer your thoughts on terms of reference because you're the "experts" in the field, and bob's yer uncle, the system is breached and ready for plunder. Free project insurance and feds immune from consequences, while Mr and Mrs Average have their pocket picked. The rule of law, the protection of "jurisdiction". Howl all you want, plebs, we don't have to pay you any mind whatsover. Oh, and sure, we'll lower corporate taxes to be "competitive". Morneau never met a scheme like this he didn't like, and Trudeau dimwittedly concurs. It's a sweet gig ordering everyone around for fun and profit, while offering only false platitudes as recompense when cornered. Easy.

BTW, our corporate media overlords never have presented anything but three second clips of Horgan on KM. He's shown as an unintelligent belligerent whiner to us here in the Maritimes, with accompanying backing dialog. By contrast, Notley and JT are shown at length promoting their idiocy and assuring us they're acting for all Canadians. Propagandic mind washing. So it was a surprise that Robertson had a full two minutes to put forward Vancouver's case. Someone must have had a mind fart and forgot that BC must be demonized at all times.


Well, it's going ahead now, BM, and it's on the federal government's dime at that. Whoever Trudeau is so beholden to, he came through with $4.5 billion to keep them happy.