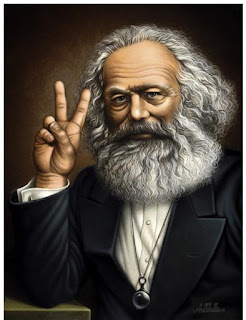 Tomorrow is the 200th anniversary of the birth of Karl Marx.

I first encountered the Communist Manifesto in officer school. I understood almost none of it but I discovered that dismissing it as "Commie crap" was enough for a passing grade. Small mercies.

It was almost seven years ago that I posted a Wall Street Journal interview with American economist, Nouriel Roubini, in which he maintained that Marx has been proven right, capitalism will destroy itself through the destructive transfer of income from labour to capital leading to an economic death spiral.

In recent years there's been something of a consensus built around the idea that Marx may have been radical but he was probably right. Today's New York Times has a feature op-ed, "Happy Birthday, Karl Marx. You Were Right!" 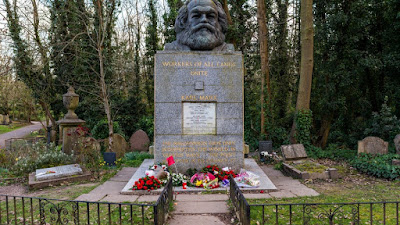 Even though Karl and his kin rest in north London's Highgate Cemetery, for most of his dirt nap he's been scorned as a subversive, a threat to the natural order of free enterprise. It's nice to see him rehabilitated. After all, it looks like he was right.

"Workers of all lands unite" indeed.

As far as I can understand Marx: it's not about the "destruction" of capitalism, but instead its transformation. It is supposed to be the integration or marriage of democracy and capitalism into one system, but coupling these systems had proven difficult, if not impossible. Human nature continually gets in the way of things.

Communists have tried, but sacrificed far too many lives by an uneven application of democracy.

Capitalist efforts have been just as bad, but approaching it from the opposite direction.

Both arrived at prison states.

It'll probably take wholesale disenchantment with neo-liberalism to dislodge its adherent from power. What replaces neo-liberalism could be anything. It could be the far-right winning out, if the election of Trump is any indication. The far-left and the left-of-centre seem to have hardly any organizational power, continually struggling just to gain traction.

The left-of-centre should have used this time in the Trump era to reorganize or rebuild itself, but an inability to separate/disassociate/differentiate itself from neo-liberalism is proving long and difficult.


I agree, Troy. It's going to take some form of upheaval to pry ourselves free of neoliberalism. The left and centre-left have succumbed to neoliberalism and have no appetite for dislodging it. The forces of corporatism have embedded themselves deeply in our body politic and they won't yield their gains without a fight.

Where is David Lewis now that we need him?

It is supposed to be the integration or marriage of democracy and capitalism into one system, but coupling these systems had proven difficult, if not impossible. Human nature continually gets in the way of things.

Is that the same democracy and capitalism that got us into this friggen mess that we live in ?

Please, someone,give me a real alternative.