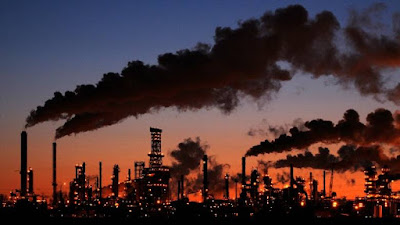 While we're on the subject of pimping bitumen, pipelines and supertankers, let's pause to observe another waypoint passed in our race to increase our atmospheric loading of greenhouse gases.

410. The Big Four-One-Oh. Oh, oh, oh yeah. We did it. Why it seems like just yesterday we were struggling to nudge atmospheric carbon dioxide levels to 400 parts per million. Now, that 400, it's kids' play. We're not only through 410 ppm, monitoring found we spent the entire month at that level. Haven't we come a long way from the pre-industrial era a couple of centuries ago when we could barely muster 280 ppm. We're masters of the universe now baby.

“As a scientist, what concerns me the most is not that we have passed yet another round-number threshold but what this continued rise actually means: that we are continuing full speed ahead with an unprecedented experiment with our planet, the only home we have,” Katharine Hayhoe, a climate scientist at Texas Tech University, said in a statement on the milestone.

Planetary carbon dioxide levels have been this high or even higher in the planet’s history — but it has been a long time. And scientists are concerned that the rate of change now is far faster than what Earth has previously been used to.

In the mid-Pliocene warm period more than 3 million years ago, they were also around 400 parts per million — but Earth’s sea level is known to have been 66 feet or more higher, and the planet was still warmer than now.

As a recent federal climate science report (co-authored by Hahyoe) noted, the 400 parts per million carbon dioxide level in the Pliocene “was sustained over long periods of time, whereas today the global CO2 concentration is increasing rapidly.” In other words, Earth’s movement toward Pliocene-like conditions may play out in the decades and centuries ahead of us.


Hayhoe is right. Give it time. You can't bake a cake or a planet in five minutes. It takes a while but we're getting there.

h/t Marie Snyder, "A Puff of Absurdity."
Posted by The Mound of Sound at 3:56 PM

.. thanks Mound.. and of course ms Snyder..
I don't recall any mention of this
in Mainstream Media.. nada

It wasn't that long ago that I (and likely you) was asking
"Have you heard of 350.org?" And getting incredulous stares or indulgent chuckles as I explained the purpose.

A lot less chuckling going on now. Here's to Keeling, Hansen and McKibben!

It did make the Sunday Toronto Star, for all the good that will do.

i just checked, since it did not seem so long ago:
september 2016: first sustained month-long measurement of 400ppm.
and with this news (april 410ppm all month) it's only a year-and-a-half later.


And what does that tell us, Anon? Pretty mind boggling.