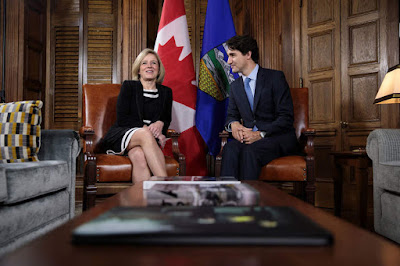 The more unviable the Athabasca Tar Sands become, the more extreme measures politicians will accept to keep that corpse warm.

There's nothing for it but to drag it out into the burning light of day.

One thing we all know - all of us - is that to these small-minded politicians with their "next electoral cycle" vision, 70 years might as well be 70 centuries. Hell, even their kids will probably be long dead by then.

Imagine if you could just tell the bank how much money you think you owe them and that you’ll settle up 70 years after you move out. Wouldn’t that be easier?

That is essentially the deal Suncor has been granted by the Alberta government regarding the ballooning liability from their oil sands tailing ponds and related reclamation requirements.

Like all other operators in the industry, every year Suncor presents the Alberta taxpayer with an estimate of what the corporation thinks it will cost to reclaim the artificial lakes of toxic sludge it has created, in Suncor’s case since mining began in1967. No supporting documentation required.

...Collectively, tailings ponds now cover 25,000 hectares in northern Alberta and contain a poisonous brew of organic acids, benzene, lead and fine clay particles that have not significantly settled out in 50 years. The result is lakes of toxic yogurt impounded by the largest earthen structures in the world.

Alberta has the constitutional right to manage resources as the province sees fit, but the current situation could be described as regulatory humiliation. Bitumen royalties make up less than four per cent of the provincial budget and capture a similarly puny proportion of the market value of bitumen produced by the companies.

Since 1975, the province produced over 4,800 trillion cubic metres of natural gas, 17.4 billion barrels of conventional crude and 11.4 billion barrels of bitumen with cumulative current value of $1.7 trillion.
Successive governments since Premier Peter Lougheed somehow managed to convert this vast resource bounty into a growing public debt of $43 billion.

This shockingly inept fiscal management could soon become the problem of all Canadian taxpayers if the largely unsecured liabilities of bitumen tailing ponds are included in the equation. Cleanup costs, as estimated by industry, amount to $27 billion, while other observers put the risk closer to $48 billion. Only $1.4 billion is currently secured by cash reserves from the companies; the rest is backed only by the value of unmined bitumen.

What happens if global economic forces or disruptive technologies render the remaining bitumen reserves uneconomic? The oil sands are consistently touted as a driver of national economic growth. What if they instead become an expensive and worthless mess the rest of the country is on the hook to clean up?

An unfolding disaster around abandoned conventional oil and gas wells offers an illuminating glimpse into the future.

Last March, Chinese-controlled Sequoia Resources announced to provincial regulators it was broke and walking away from 3,000 oil and gas well sites with a potential cleanup liability of $500 million. Sequoia posted no reclamation funds to cover remediation costs, as is typically required, because Alberta regulators granted the failing company exemptions from solvency requirements.

After operating for 56 years and producing seven million ounces of gold worth almost $12 billion, the Giant Mine in Yellowknife went into receivership in 2004, leaving Ottawa with a $1-billion remediation bill. The Sydney tar ponds cleanup in Cape Breton cost Canadians another $400 million. Ottawa has already contributed $30 million to Alberta’s orphan well fund — a trickle that could soon become a deluge.

Economic cheerleading by federal and provincial politicians and the mainstream media on behalf of the oil industry is doing the public a great disservice. When the party is over in the oil patch, Canadian taxpayers may find themselves doing the dishes.

It's sad to see Trudeau going down the same path as Harper and Notley doing her best to be even more Tar Sands friendly than her successor, Kenney.

One would think that with his drama training that Trudeau would be better at hiding his subservience to foreign corporations and governments. He has got to go.

What is increasingly sad is that the federal NDP has dropped the ball so completely as to be useless. There is a wide open opportunity to create a new vision and all the NDP can do is navel gaze.

Mound;
Good to see that you challenge the tar sands for what it is; a financial con.

For tar sands to be defeated it must come down to dollars and cents as the mass public is brain dead to environmental issues.

The next inconvenient truth is that we have to deal with growth and population.

As a youth I was told to avoid talking about politics and religion!
My, my, what a mistake.


I put it down to the powerful combination of political expedience and fear. Being the prime minister or the premier of Alberta is very much riding on the back of a tiger, the Tar Sands. You don't dare step off. Your future hangs in the balance.

They're scared shitless of what they imagine will happen if bitumen becomes the first victim of a bursting carbon bubble. Banks and bourses, even pension funds have sunk a great deal of money into the Tar Sands and the fallout could be devastating.

And so they perch uselessly with one foot on the dock, the other in the boat, muttering a coward's prayer that this fiasco doesn't melt down until some other poor bastard is in power to take the heat.