What Does This Say for Canada's Economy? 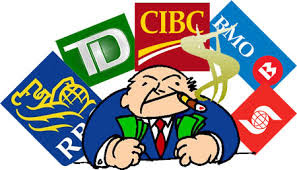 Back in February, I did an item about the largest corporations in the US and Canada respectively:

Here are the current standings

Boeing, which chose to leave Washington for Chicago, comes in at a paltry $205 billion.

By contrast, Canada's top 3 are banks: RBC, TD and Bank of Nova Scotia, at $113, $102 and $74 billion (Canadian) respectively. Pretty small potatoes and not an innovator or tech giant among them. Hewers of wood, drawers of water and bank tellers. Great.

That post came to mind as I re-read James Galbraith's book, "The End of Normal," and his discussion about banks. I'm not a banker nor an economist but I put Galbraith's assessment out there for you to decide the role of banks in Canada.

In Canada, chartered banks are creatures of statute, given certain very advantageous rights. Every year, it seems, they announce record profits while ordinary Canadians complain they're getting the shaft. This is how Galbraith sees banks in the 21st century:

Banks are intermediaries. They provide nothing that contributes directly to current consumption or business investment. They are useful only insofar as they support either household consumption or business investment - and then only so long as they do so in an effective, responsible, low-cost way. Business underwriting was once such a function, but it entered a deep decline during the mortgage boom, if not before. Otherwise banks serve mainly to consolidate control and power, and they support this by exacting tribute, in the form of interest, from their borrowers. ...From a social standpoint, this is predation: no net benefit to anyone outside the banking sector comes from it.

Perhaps the country would be better off without its big banks. The basic functions of banking for most of the public - deposits, payments, credit and debit cards - could be handled by a low-cost public facility, perhaps run by cities or states at municipal pay scale or by the postal service. Smaller and regional and cooperative banks could grow into the work of business lending and of sorting good from weak household risks. Since executives of small banks are paid on a less lavish scale, the reduced cost of the financial plutocracy would be a social savings. There is no guarantee that these changes would bring financial stability: small banks can run in herds, and given the experience that bankers have acquired in distributing and hiding risk and fraud, there may be no solutions in the computer age to the dysfunctions of finance. But a decentralized system with smaller top-level units, less powerful bankers, and stronger controls could not be a worse bet than the system that exists now.

Galbraith, of course, writes of banking in the United States. Thanks to people such as Paul Martin, Canadian banks were reined in, held in check, when they lobbied for permission to leap into American style Casino Capitalism that ruined so many banks in the US and Europe during the sub-prime mortgage bubble.

Canada escaped the American contagion - barely - because the crash came before Stephen Harper could remove Martin's prudent constraints. However, unlike the States, our big banks have become the largest corporations in Canada and they've grown immensely profitable while generating very little no no economic activity to benefit the country.

And banks may now be playing a detrimental role in Canada. Some speculate that behind Trudeau's pipeline fetish is concern that Canada's banks are so heavily invested in the soon to be stranded asset, bitumen, that not pushing the bitumen trade could have a devastating impact on the Canadian economy.

It's like riding a tiger. Great fun until you fall off. The bitumen barons have Canada in a real jam and, the recent Kinder Morgan ultimatum that sent Morneau scrambling to Texas, hat in hand, suggests they know it and won't hesitate to play hardball with the Liberal government.

Canada's chartered banks are supposed to serve the country, not the other way around, and yet, by their very size, they may now be dictating government policy. They've grown too big for our own good. Perhaps it is time to put them to pasture.

How sound can a nation's economy be when it is dominated by corporations that produce nothing?

Canadians have been convinced to believe that we are not capable of more than hewers of wood etc.
It takes hard work and patience to become a tech economy or even small manufacturing economy.
Back in the BC Socred days Pat McGeer and others promoted high tech and secondary manufacturing.
Subsequent governments ,particularly Liberal in name only, sent us on a mission to export raw products then sell real estate for an economy.
Perhaps the Gordon Campbell Liberals knew little else but selling and developing real estate?( BC Rail a prime example)
So; we have finished up with a brain dead economy in both BC and Canada.
The under educated ,under life experienced MP's and MLA's across the country have sold us out for the low hanging fruit.
They did such a good job a majority believe them!

I just can't imagine that it's a sign of a healthy, robust economy to have the banking industry as the dominant component of the private sector, consistently out-performing real enterprise.

We know from the World Bank, the IMF and such that we have a highly educated populace, a terrific work force, and yet the best we can muster is a gaggle of banks.

The financial sector in Canada seems to have become much too influential. Look at Trudeau with KPMG and the Isle of Man tax fraud scandal. No one went to jail? Not one?

Look at the incestuous relationship between the Revenue Agency and the big accountancy firms with senior tax officials pensioning-out of the public service only to step into vastly more lucrative jobs in the big accounting shops. You want that pot of gold at the end of the rainbow? Better play ball.

Canadians look at the United States and believe that could never happen here. It may well be happening here, albeit with far more discretion.

In the military we now have a similar situation with pensioned-off generals moving down the block to defence industry consultancies or defence contractors directly. I doubt it's coincidental that these generals turn incredibly "industry friendly" in the years prior to retirement.

"F-35? Greatest goddamned airplane ever made. We'd be fools to buy anything else."

The public interest is defeated by these individuals, both at the stage of their government careers when they're most powerful and influential and in the lucrative gravy train that awaits them thereafter.

That sure as hell sounds like corruption to me. Perhaps if we amended their pension entitlements to deduct these afterlife earnings, dollar for dollar, we would see a real change in their career paths.

F35; the Kinder Morgan of the oil supply industry!

I was looking at a mortgage calculator:

The fact that the Top 5 in the US are all predatory tech monopolies or near monopolies doesn't place this country in any better position. When billionaire dirtbags like Mark Zuckerberg and Jeff Bezos are effectively elevated above the law while completely destroying personal privacy and utterly gutting the middle class, your society is in deep trouble. How I wish we could rewind things by a decade when the banks were our biggest problem.

Not to mention that, thanks to John Turner, the charter banks have become the country’s bankers, replacing the Bank of Canada , which was created to prevent just such an eventuality. The public debt almost exactly tracks the charter bank profits as they charge ruinous interest rates and provide a reason for government to be beholden to them. Yet another consequence to the “Government should run like a business” philosophy.

When reading this blog....I was filled with "jubilation". Finally! Someone has the balls to address the "Gobble Banks" of Canada including the foreign "gorge" corporations driving Canada into a downward spiral of depression not ever seen before with government help. How ripe is that? Anyong