Bill McKibben Sums Up Trudeau in One Sentence 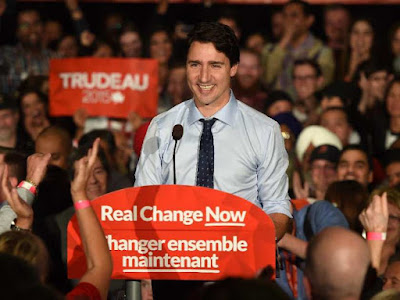 "In case anyone wondered, this is how the world ends: with the cutest, progressivest, boybandiest leader in the world going fully in the tank for the oil industry."

That's how climate change campaigner, Bill McKibben, sees this prime minister, Trudeau. And I think he nailed it.


Justin Trudeau’s government announced on Tuesday that it would nationalize the Kinder Morgan pipeline running from the tar sands of Alberta to the tidewater of British Columbia. It will fork over at least $4.5bn in Canadian taxpayers’ money for the right to own a 60-year-old pipe that springs leaks regularly, and for the right to push through a second pipeline on the same route – a proposal that has provoked strong opposition.

That opposition has come from three main sources. First are many of Canada’s First Nations groups, who don’t want their land used for this purpose without their permission, and who fear the effects of oil spills on the oceans and forests they depend on. Second are the residents of Canada’s west coast, who don’t want hundreds of additional tankers plying the narrow inlets around Vancouver on the theory that eventually there’s going to be an oil spill. And third are climate scientists, who point out that even if Trudeau’s pipeline doesn’t spill oil into the ocean, it will spill carbon into the atmosphere.

Lots of carbon: Trudeau told oil executives last year that “no country would find 173bn barrels of oil in the ground and just leave it there”. That’s apparently how much he plans to dig up and burn – and if he’s successful, the one half of 1% of the planet that is Canadian will have awarded to itself almost one-third of the remaining carbon budget between us and the 1.5 degree rise in temperature the planet drew as a red line in Paris. There’s no way of spinning the math that makes that okay – Canadians already emit more carbon per capita than Americans. Hell, than Saudi Arabians.

Now, in fairness, Canada is not going to flood the world markets with 173 billion barrels of bituminous sludge. The good and cheap stuff is already gone. From here on in, getting lower grade bitumen out of the ground is going to become increasingly energy intensive, carbon intensive to extract, more difficult to transport, and less desirable ($$$) on world markets. Costs will increase, emissions will increase, price and profits will decline. (Unless, of course, we go back to the plan they had in the 50s to use underground nuclear detonations to boil the stuff to the surface. There's an idea. Psst - keep that to yourself. Don't mention it to Justin.)

Canada is once again a climate change pariah. Can't be helped. That choice has been made for us and, of course, there was no mention of this when it might have mattered, when we went to the polls in 2015. Trudeau and company were talking an entirely different tune back then, back when they wanted our votes.

Have you noticed the eerie silence from the Liberal rank and file, what I call the Stepford Wife Liberals? Nary a peep.


Is this a clever financial decision that will somehow make Canada rich? Certainly not in the long run. Cleaning up the tar sands complex in Alberta – the biggest, ugliest scar on the surface of the earth – is already estimated to cost more than the total revenues generated by all the oil that’s come out of the ground. Meanwhile, when something goes wrong, Canada is now on the hook: when BP tarred the Gulf of Mexico, the US was at least able to exact billions of dollars in fines to help with the cleanup. Canada will get to sue itself.

No, this is simply a scared prime minister playing politics. He’s worried about the reaction in Alberta if the pipe is not built, and so he has mortgaged his credibility. His predecessor, Stephen Harper, probably would not have dared try – the outcry from environmentalists and First Nations would have been too overwhelming. But Trudeau is banking on the fact that his liberal charm will soothe things over. Since he’s got Trump to point to – a true climate denier – maybe he’ll get away with it.

But it seems like a bad bet to me. Faced with the same situation – a revolt over the Keystone XL pipeline – Barack Obama delayed for several years to avoid antagonizing either side. He ultimately decided he couldn’t defend the climate cost of building it, and so became the first world leader to explicitly reject a big piece of infrastructure on global warming grounds. Trudeau has made the exact opposite call, and now we’ll see if pipeline opponents cave.

Liberals, you're just going to have to wear it. Canada has now been shackled to high-carbon fossil energy for decades to come. It's going to take at least 30 years to recover the costs of this blunder and, if people like Harper and Trudeau continue to control this country, that pipeline could be spewing life-ending filth for half a century.

And, make no mistake, the sludge we're going to be selling abroad, almost a million barrels a day of it, will cause enormous suffering and dislocation among the poorest, most vulnerable people of the world. It will claim lives and lots of them. This is not a victimless crime. Pierre Trudeau cared deeply about the people of the world. They were at the heart of his "north-south" dialogue. Justin - not so much, no, not at all.

This is the Guardian most read article at the moment.
No more photo ops abroad to escape CDN realities.


I wonder if we'll see Trudeau and McKenna boldly step out onto the floor of this year's UN climate summit in Poland? Who knows, maybe they can sell a mess of thermal coal to the Poles?