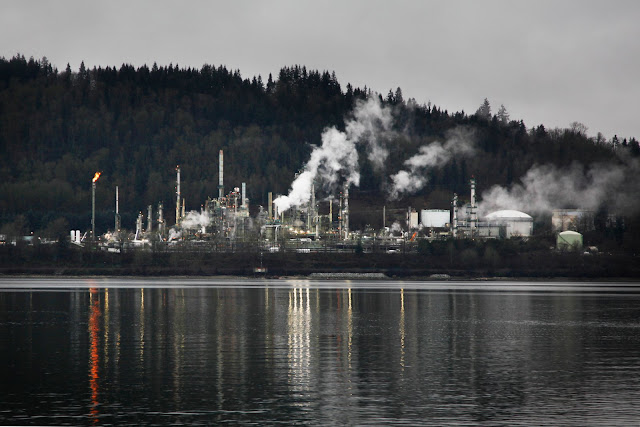 It's been recognized for years that the way to mitigate the dangers of and opposition to the Athabasca Tar Sands and its pipeline and tanker infrastructure is to refine bitumen on site into finished petroleum products - various grades of oil, gasoline, petro-chemicals and such.

Someone, however, doesn't want that solution. They want to send big volumes of a light oil called diluent to Athabasca so that it can be mixed with the sludgy bitumen so that, with heat and high pressure, that sludge including its toxic components - the "sand" and various acids, heavy metals, assorted carcinogens and the highest carbon form of coal known to man, granulated pet coke.

All that garbage is then loaded into the hold of a supertanker for delivery to a refinery in another country where it's processed, some of it coming back to Canada as finished products at big price markups.

We deliver the crud to a foreign refinery at a great discount - because it's crud - and they process it and sell it some of it back to us at a great profit. They get the economic activity. They get the associated jobs. They pocket the big profits. We take the big risks associated with pipeline spills and massive catastrophic damage to our coastal ecology when a tanker eventually founders and sinks. In other words, somebody is making out like a bandit on this deal and it's not us.

Here's an idea. How about we build refineries and process the crud on site. Fully refine it into finished prices. Canadian oil products for the Canadian market. Minimize the environmental risks associated with transporting hazmat dilbit. Employ Canadians to work in Canadian refineries. And, by keeping those oil products in the Canadian market we will truly reduce our dependency on foreign oil.

One possible reason for Trudeau and Notley dummying up is that Canada's refineries are an "embarrassment."

The Imperial Oil Refinery in Sarnia, Ont., and the Marathon Petroleum refinery in Detroit. MI., have much in common: geography, climate and production levels.

What separates them is a 90-minute drive, a national border and starkly different emission levels for some key pollutants.

Canada’s tiny fleet of 15 refineries emitted 62 per cent more sulphur dioxide (SO2) than 127 U.S. plants combined in 2014. Fourteen out of 15 refineries in Canada would have to cut their sulphur dioxide (SO2) emissions by at least half to meet the average level of emissions in the U.S., the data shows. Of those, nine of them would need a reduction of 90 per cent or more to reach the U.S. average. Exposure to SO2 can harm the respiratory system and make breathing difficult, especially for those with asthma.

Eleven of the 15 Canadian refineries would need to cut nitrogen oxides emissions by at least half to reach the U.S. average.

Nine of the 15 would need at least a 50 per cent reduction in carbon monoxide emissions to reach the U.S. average.

In 2001, federal, provincial and industry officials agreed to move Canadian refinery emissions in line with U.S. benchmarks — a goal that remains far from complete 17 years later.

“It's almost mind boggling when you look at these numbers,” said Elaine MacDonald, an environmental engineer with the non-profit EcoJustice. “It would be quite an embarrassment to Canada for this data to be made public because it does show how far behind we are compared to the U.S.”

The west is no better.


Regina’s Co-Op Refinery Complex emitted more than seven times the U.S. average for VOCs in 2014 and eight times the average for benzene — a chemical known to cause cancer —according to the data.

The same year, the Parkland Burnaby Refinery in B.C. (then owned by Chevron) gushed nine times as much sulphur dioxide as the ConocoPhillips plant an hour’s drive away in Washington state — even though it processed only 53 per cent as much oil.

Is this part of the answer to Justin's pipeline fetish? We can't allow the crud to be refined here, the emissions would be massive. It's easier just to ship it to American refineries, cleaner refineries.

Such is life in a petro-state.

It is stunning how our EnviroMin ducks when pushed for details. She sure doesn't want to upset the oil magnates. It's a long Liberal/Conservative tradition and the NDP is learning.

Just which country do our politicians work for? Who do they represent? Are the Koch Brothers paying their salaries?

Good data on the state of Canadian refineries but I'm not surprised.

We must be under pressure to ship out our most unprocessed resources (bitumen, whole timber, etc.) for others to add value to them.

It just doesn't make sense (national interest) not to even talk about the possibilities.

NAFTA is certainly one source of that pressure.

Maybe the companies that profit from the refining are the same ones that bought the mining rights in the tar sands. At least until they could offload them after we got hooked to the petrol drug. Leaving us with addiction and nothing but pain, especially when it comes to finally cleaning up the toxic remains when it finally dies

Well, Mound, this data certainly makes the environmental case for refining in the US - it's pollutes less! What I don't get is why our lax regulations haven't made us the go-to place for refining.

when the profits sink, the 'mines' are sold to shell companies
The actual 'owners' walk.. and taxpayers take over
the vast tailings 'ponds'
most far larger than my family farm
which was 150 acres or so

The farm was what was designated a 'Century Farm'
and when it was sold it was hardly toxic, & far from
The land was fine, the soil productive
The barn fresh painted.. exceptional corn, alfalfa
and all without a subsidy of any sort
and came with a barn cat

Where Alberta is headed is in a different direction
toxic remains, after massive subsidies
waterways ruined (the Harper Legacy)
and Jason Kenney has jumped aboard
to skipper the plague ship beside ms Notely

Where the petrocoke residue after refining blows to
aint their problem .. who knows ? Indiana ? Nebraska?
Prevailing NW winds do what they do
Maybe the Koch Brothers can tell us
or healthcare specialists..
.

@ Cap - if you find the answer to your question, please, tell me first.

@ Sal. Presumably the pet coke still goes to Koch Carbon or one of its competitors.