Sorry, Ontario. The Comma Makes All the Difference, Eh? 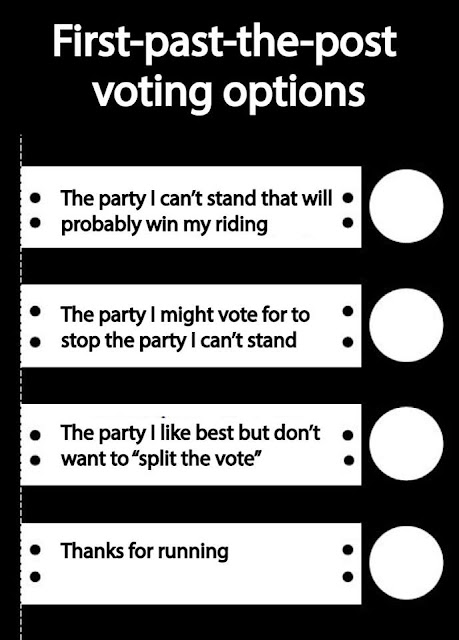 We can all thank Mr. "Fancy Socks" for abandoning his pledge to scrap FPTP and set us back by decades. Weasel!

Oddly; only the BC Liberals gave alternative voting a chance of fruitician.
Strange days indeed.

No fan of Twinkle Toes, but the fact is Dippers burned his arse on electoral reform. Just out of sheer partisan spite. Like cutting off their noses to spite their faces.

Dippers might have big hearts, but their self-righteous fanaticism and self-defeating weasel-politicking render them brainless.

It's why they always end up sad-sack losers.

Now they've really done it to themselves!

They could've gotten out from under the boot of FPTP. Competed on an equal footing with the Liberals over the center-left vote. But Nooooooooo! They would rather give the Liberal party their votes and their seats and remain a fringe third-place party. Take that!

Today the party is a cauldron of cultural-Marxist nonsense, in any case. So perhaps it's better that they dealt themselves out of the game.

Before they didn't deserve it. Now they do.

Anon 7:45, the term "cultural Marxism" is indeed meaningless nonsense and so is your comment. You can't blame the third party in the House for Trudeau's failure to live up to a campaign promise. He has a governing majority and can pretty much do as he pleases. Historically, the Libs have benefited most from FPTP and it's no wonder their tacticians wanted to keep the system. It's now clear that the promise was just a cynical ploy to attract NDP votes.

Well yes, and in other news, the vituperative, petulant, vindictive true navel-gazing Albertan Ms Rachel Notley buggered up the Western premiers conference this week by sitting at home in a sulk. Gotta burn those tarsands products no matter what.

Vote-splitting is for the birds. One thing the Mound has managed to convince me of is going Green. I cannot vote for any of the mainstream parties from shape-shifting Liberals, to 1890s style Cons, to disorganized tribal-captured Dippers, federally they're all first class idiots.

Trudeau is not running this government....it is people like Goodale. He looks good and stands in good stead of the rest. Anyong