The Freedom to Shop 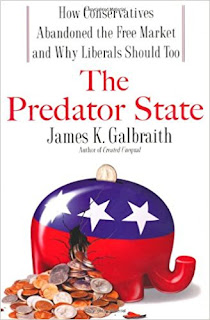 The legacy of the Reagan Revolution lies in the impact it has had on us and the role of markets in our lives. These nearly 40-years later it emerges in our conditioning, the manner in which we've been transformed by globalism and the neoliberal order.

Economist James K. Galbraith, son of the legendary John Kenneth, explores this in his book, "The Predator State." The second chapter is titled, "The Freedom to Shop." Here are some excerpts:


It was (and always is) the purpose of an ideology - of a set of ideas - to reach out beyond those who were buying and those were were bought, to convince a much larger group with no direct financial stake in policy outcomes. For this purpose the conservative movement had a secret weapon, and that was the link between markets and "freedom." This they called the concept of "economic freedom."

...Indeed, the conservative concept of economic freedom actually stands opposed to any measures that commit the state to raising the standard of living of the broad population. It opposes such ideas as universal health care, free public education, and public subsidies to the arts, and it particularly opposes these measures if they are to be financed by redistributive and progressive taxation.

Economic freedom consists in the ability to live one's economic life - and that alone - in a sphere separated from state control and therefore reserved to the interaction of private forces. As Milton Friedman would define it in the title of his 1980 best seller, economic freedom means being free to choose. It is freedom to spend. To put this into perspective, we should call it what it is, the freedom to shop.

...A great many Westerners saw a yearning for "freedom" in what was, for many, not much more than the wish for a better diet and stylish clothes.

In consequence, the freedom to shop has become, after a fashion, a political right. Wal-Mart's access to cheap goods from China depends on the availability of those goods but also on the US government's willingness to let them in. Correspondingly, efforts to reverse the globalization of world trade, should they lead to rising prices and a reduced diversity of consumer goods, will threaten a way of life. They will be seen by much of the population as a fundamental attack on established freedom. ...it is interesting to reflect on how the American people would react to a shortage economy, should they ever have to live in one.


The concept of a freedom to shop has been extended, insidiously, from its origins in the realm of goods. It has reached, for instance, the realm of careers, where it plays even greater havoc with the normal use of words. In a "free" capitalist society, with private schools and universities able to admit whom they please and charge what the market will bear, the freedom to choose one's profession becomes in part the freedom to become what one can afford to become. It is not the calling that does the choosing, in other words, but the person who chooses the calling he or she can pay for. The choice is "free" - because it's mainly a matter of money. It depends only partly on talent, training, discipline or accomplishment of any kind...

...A great many people, not merely the rich, accept these ideas: a freedom to shop, a freedom to buy the career that you want, the freedom to merge and acquire. They do so in part because it completely liberates them from any standard other than wealth and also from the political process. In this world, any policy that reorganizes or constrains the allocation of money beyond the minimum policing required to keep markets honest is in essence and by definition an assault on freedom. Even elections are not "free," unless those who have the money are free to buy them. In our legal doctrines, written into the Constitution by latter-day zealots, the right of a big company to drown out public speech is itself "freedom of speech."

...But this raises the question: What exactly is a market? What does it do? How does it work? ...When you come down to it, the word market is a negation. It is a word to be applied to the context of any transaction so long as that transaction is not directly dictated by the state. The word has no content of its own because it is defined simply, and for reasons of politics, by what it is not.

...So who is "market freedom" for? It is the freedom of what my father called "The Planning System." It is a real, practical, secure and highly valued form of freedom. But it is a freedom for business alone, and even less than that: it is a freedom for stable large corporations with substantial political power, for only such businesses can muster the power to exercise that freedom in the fullest: from disposition of the resources and command over labor, to the design of its products, to the pricing and distribution and planned obsolescence,and to the management of all the consequences, including environmental and political ones.


Not content with having fallen almost mortally behind in my reading, I've begun adding to my stack a number of volumes that I know deserve to be digested one more time.  Galbraith's now decade-old "Predator State" is definitely one. Revisiting these books a decade or more later brings a lot of new meaning as theory takes its place in modern reality. A good example is Galbraith's remarks on corporate power that were upheld by the US Supreme Court in the Citizens United case.

Galbraith's insights reveal, to me at least, how perilously difficult it will be for us to get out from under the boot of neoliberalism when disrupting its economic engine, globalization, would be seen by many as a threat to their way of life, an attack on the freedom to shop.

It strikes me that if we have been weakened to the point where we cannot free ourselves from the neoliberal yoke, our chances of tackling the really dangerous and hard stuff such as climate change are considerably worse.
Posted by The Mound of Sound at 3:28 PM

Beyond living comfortably, I've never understood the need people have for more and more stuff. Worse, I don't understand retirees buying 3,000+ homes and monster trucks they struggle to climb into.

In the late 70's in the midst of a lot of cold war hype I would often come across rants about the lack of freedom in the Soviet Union. My response was typically, 'And freedom in the west is which colour television to buy. That's the freedom you want?'
The 'sell' job has gone on unabated in the west.


I think the "freedom to shop" represents just one form of our conditioning since Reagan, Thatcher and Mulroney brought neoliberalism into our livingrooms. There were other scalpels - easy credit, the rise of the corporate media cartel, lobotomy by electronic devices. Today even our reality is being powerfully manipulated, twisted. Informed consent has been crushed by manufactured consent. We're not far away from Huxley's "Brave New World," another book I must drag out and toss on my reading list.

Mound, I think that freedom as shopping was an easy sell as Edward Bernays demonstrated so well. Reagan, Thatcher and Mulroney just upgraded the greed.

When in foreign places I have several times had young men tell me about their wish to migrate to America. When I asked why they all responded with desire to buy. Pickup trucks were high on the list of wants. Never did any say anything at all about freedom in any other respects.

The freedom to enjoy a good quality of life is pretty much zilch.