This Is What the "Race to The Bottom" Looks Like 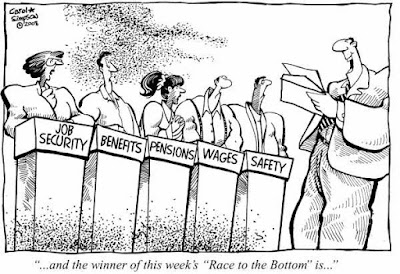 Earlier this week, the CEO of Canadian insurance giant, Sun Life, warned that Canada is "no longer competitive." Naturally he was referring to the latest round of Republican tax cuts for corporations and the rich. As I wrote at the time, it's just another corporate shakedown in the era of "everyday low taxes."

America is in a race to the bottom and, unless Trudeau develops a spine pretty soon, we're at risk of getting dragged down with them.

It's a common problem in the United States and it extends through federal, state and municipal governments. Governments are broke and broke governments are broken governments. You can't lavish windfalls on the rich, especially not when you're already running deficits, without someone paying for your largesse and, oddly enough, that's inevitably the poor and most vulnerable.

This seems to be a particularly severe problem in the Deep South, the Slave States. Here's the latest object lesson - Louisiana - a state with a Democrat governor and a legislature under Republican control.

Louisiana Republicans vowed to do something about the $650-million deficit and so they did. Now the governor warns that 37,000 Louisiana medicare recipients may lose their health care, both state medical schools may be shuttered, and several major hospitals may have to lay off staff.


The Louisiana Department of Health, on orders from Democratic Gov. John Bel Edwards, mailed 37,000 letters out to people Tuesday who rely on Medicaid health care programs that are considered “optional” under federal guidelines. The letters warned them they could lose their home health care aides and be forced out of their nursing homes starting July 1.

...The reason? The Republican-controlled state House of Representatives made deep cuts to the proposed budget to make up for a $650 million shortfall rather than continue a temporary tax which ends on June 30 — and had been buttressing the bottom line.

And that's the face of the race to the bottom. Do you trust your government to resist getting dragged into this?

I certainly have no faith in the feds on this, and many other issues. The snake oil they peddle is all too easy these days to palm off as 'necessary measures.'

One government passes the problem onto the next level of government. But, regardless of the government, the citizens are the same.


The Amazon Vancouver report suggesting that this new tech venture so proudly announced by Trudeau might turn out to be a quick fix to Amazon's problems importing guest workers into the States got me thinking about Trudeau's statement, shortly after being elected, that Canada had become a "post-national" state.

Wiki defines it: "Postnationalism or non-nationalism is the process or trend by which nation states and national identities lose their importance relative to cross nation and self organized or supranational and global entities."

Has the Canadian nation-state lost its importance to Trudeau? Did someone give him the authority to transform Canada to this radical new form in which the state yields to "supranational and global entities"? Is Morneau's "job churn" part of this new reality in governance?

I suppose in a postnational mentality guest workers are not a problem provided they're a component of some increase in economic activity.

Vancouver is entering a stage of socio-economic paralysis. It's a city for the "already rich" who can come in and buy a house with a seven-figure price tag. That creates a crisis of affordability for the essential workers every city needs to function from busboys to family doctors. There's not even a gas station in downtown Vancouver any longer. When the owner goes to retire he can't sell the property as a gas station. The property is worth too much. And so the gas station is torn down and a multi-level condo is built on the site, each individual unit selling for more than the former gas station owner paid for the land when he bought it. Young doctors emerging from their internship don't fill any of the countless vacancies in Vancouver. It costs too much to buy the sort of house they want. They can come to the island, buy a beautiful waterfront home in Nanaimo for a small fraction of the Vancouver price and then they can live like human beings.

And into that troubled milieu Trudeau wants to help Amazon bring a small army of guest workers.

Trudeau is a creature of his handlers. He's not a bright guy. That might account for his apparent indifference to cognitive dissonance.


Owen, apropos of your post today on Hedges and the role of community, I have to wonder whether measures, such as those mentioned here in Louisiana, could have happened had Louisianans been a community of citizens. Today we're hived off, isolated in so many ways. Smartphones are one example. People today are "connected" but not in any communal sense. They're isolated individuals strung together by electronic links - links, not ties. If your cellphone battery dies your absence may not be noticed because you disrupt nothing, leave no critical void by your absence.

I understand Hedges' prescription but I cannot grasp how that can be made a reality. Part of my doubt is anchored in the frustration of age. It's unlikely Hedges' vision can be achieved in my remaining lifetime.

Revelation 11
[15] And the seventh angel sounded; and there were great voices in heaven, saying, The kingdoms of this world are become the kingdoms of our Lord, and of his Christ; and he shall reign for ever and ever.