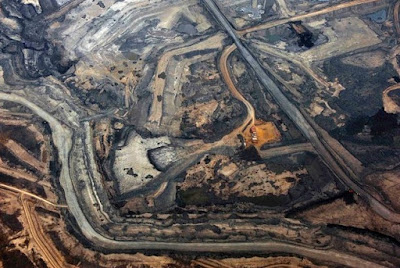 It's a Biblical term.  It means money earned in a dishonest or dishonourable way.

In today's environmentally troubled world,  filthy lucre is an apt description of revenues governments pursue from high-carbon, toxin-laden bitumen at the enormous cost of our young and future generations. That is nothing if not dishonourable.

Justin Trudeau showed his true colours when he travelled to a fossil fuel conference in Houston, Texas, to proclaim: "No country would find 173 billion barrels of oil in the ground and just leave them there."

So what's dishonest and dishonourable about this? Where to begin?

For starters, there is no 173 billion barrels of oil. It's bitumen, toxin-laden/high carbon sludge. Then there's the fact that the cleanest bitumen, the easy bitumen is long gone. Everybody goes for the easy, cheap stuff first. Now they're into harder going, more carbon intensive extraction, lower grade bitumen. We've got oil, lots of it. We pump it out of the ground where we can and frack it out where we must. We're fracking the hell out of western Canada.

It's dishonest to say that no nation would leave that stuff in the ground. No nation with a petro-pimp at the controls would leave it in the ground. Canada is a petro-state exhibiting most of the odious behaviours of a typical petro-state. We even have the national security agency, CSIS, working diligently to ferret out and monitor dissenters. CSIS, working hand in hand with the energy industry's own security/intelligence apparatus. Canada's homegrown Stasi? Maybe not, not quite, not yet. Who knows?

Not clear on what it means to be living in a petro-state?

If you watched Andrew Nikiforuk's TEDx talk, delivered to a Calgary audience, you'll quickly see through Trudeau's proclamation that his Trans Mountain pipeline is in the "national interest." It's perhaps in the immediate interests of the energy sector, the corporate interest. It's in the partisan political interests of the federal and certain provincial governments of the day. But it's less obviously in the public interest and it's clearly not in the interest of Canada's future generations.

And that's why these vaunted "here today/gone tomorrow" dilbit revenues are genuinely filthy lucre. They're monies earned, to the extent they're received at all, dishonestly and dishonourably.

.. wouldn't anybody want to know
if royalties equal subsidies .. ?

Thanks for that video, Mound. Nikiforuk nails the problem.

When I look at Trudeau I feel something approaching despair, Mound, not so much for what he represents as for the fact that millions actually believe that he is doing something about climate change. And there is no doubt in my mind that he feels pretty smug for fooling so many Canadians.


I could answer your question, Sal, but not without ruining your weekend.


Yes, Toby, he does provide a refreshing overview that is rarely heard.


What a way to close out a week, eh Lorne, commiserating over Justin Trudeau.