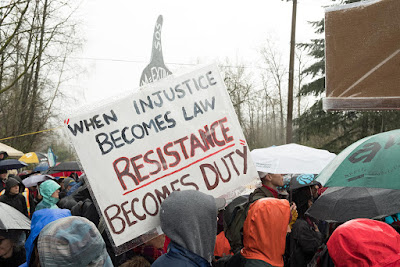 I've never been part of a civil disobedience movement but I've been on the sidelines of a few, mainly as a reporter. Then there was the VietNam anti-war movement when I did my undergrad in the States. They burned the damn ROTC (Reserve Officer Training Corps) building right to the ground. The Weather Underground and the SDS (Students for a Democratic Society) were the main suspects but they never nailed anyone. There was a movement that could cross racial and class lines with its catchy motto: "Up against the wall, motherf#@ker."

There's a new resistance building out here on the coast only it's not a youth movement against the draft and a pointless, murderous foreign war. And, just as the anti-war movement of the 60s gave first Johnson and then Nixon fits, today's Left Coast movement could and should deliver something similar to Justin Trudeau and Rachel Notley.

In today's Tyee, Will Horton makes the case for civil resistance to a dishonest, thuggish government.


Justin Trudeau lied about Kinder Morgan to win votes in B.C., only to betray his commitments once in power as prime minister. Now we learn of evidence that Trudeau’s government threw the rule of law out the window and rigged the process to fast track and guarantee Kinder Morgan’s approval. What’s clear is this: politicians have cynically pontificated about the “rule of law” while bending the rules to force Kinder Morgan through.

Many Canadians have bought the propaganda — but in British Columbia? Not so much.

Why is the rule of law so important? Because it’s the fundamental building block of democracy. But democracy is fragile, and its long-term health depends on the complex interplay and integrity of a wide range of institutions: police; courts; political parties; non-partisan civil servants; independent regulators; and legislatures — all who seek justice and pursue truth wherever the evidence may lead. Each of these institutions must be perceived as genuinely independent and not beholden to private interests. They each must be impartial, loyal to the public interest, and obedient to the rule of law. They not only enforce rules; they must follow those rules themselves.

That clearly hasn’t been the case with Kinder Morgan. Luckily the rule of law does not just belong to the realm of politicians, legislatures, ministers and the courts; citizens have a role to play as well.

In Canada’s western-most province, the aggressive language and underhanded tactics from the eastern side of the Rockies are inspiring an unprecedented number of British Columbians to step out of their comfort zone and stand together against an unjust process.

While politicians and pundits pontificate, people are organizing. Whether they are concerned about runaway global warming, Indigenous rights, oil spills, or the inherent right of people to decide their own future, British Columbians are coming together to ensure Trans Mountain never gets built.

...To be effective, civil resistance cannot be engaged in lightly. It has to be widely perceived as a “reasonable” response, undertaken only after exhausting all other options.

Ironically, the patently unfair federal and provincial processes behind the Kinder Morgan rubber-stamp, combined with the recent bully tactics from Alberta and Ottawa, are convincing tens of thousands of concerned British Columbians (as well as climate and Indigenous activists from around the world) that civil resistance is the only reasonable response to an ongoing injustice. People outraged by these injustices are worried that their provincial government may not have strong enough tools to defend British Columbia’s interests from out-of-province bullies, but despite this, they are willing to risk arrest to stand up for their province, Indigenous rights, and the climate.

Canadians generally don’t like conflict. But when they see a wrong that goes to the core of their values, they will stand up for what they see as right. If we have learned anything from the No Tankers struggle over the last decade, it’s that the more British Columbians learn about any particular oil export proposal, the more likely they are to oppose it. The same seems to be happening with the Kinder Morgan pipeline: the people who are standing against the pipeline do not see themselves as law-breakers; they see themselves as defenders of their most cherished values, including the rule of law. They are holding government to account.

...From the outraged hyperbole frothing from Alberta and Ottawa, you would think these Coast Protectors were black-masked anarchists wielding Molotov cocktails, not the clergy, scientists, grandparents, and elders singing and praying for reconciliation while being arrested. These protectors are not going away. They will not be deterred by threats. The massive exercise of state power that will be required to remove them from the gates could change the political landscape for a generation.

Elections are also included in the Canadian democratic system of accountability and laws. History shows that being a pro-pipeline candidate in tidewater ridings in British Columbia is a liability. Stephen Harper’s Conservatives learned this first-hand when they not only ignored — but actively provoked — the groundswell of opposition to the oil tanker-pipeline proposals. The Harperites thought they could bully their way to another majority government in 2015. However, anti-tanker, pro-democracy organizations had something to say about that, actively organizing in tidewater ridings to dramatic effect: Harper’s team lost almost as many votes (82,257) on the west coast as it lost in the rest of Canada combined (85,669).

Trudeau and his Liberal MPs face a similar electoral tsunami. Liberal MPs such as Joyce Murray, Jonathan Wilkinson, Terry Beech, and Jody Wilson-Raybould are particularly vulnerable. To date, they seem more interested in playing follow-their-telegenic-leader than in representing the interests of their constituents. They would be well advised to remember that civil society groups have been organizing in their ridings for years, and have battle-tested their Get Out The Vote machines. Those groups are now working to stop Kinder Morgan, on the ground and at the ballot box.

...British Columbians consider Prime Minister Trudeau’s about-face on his pre-election commitments a betrayal of epic proportions. Trudeau is going all-in to try and force the unwanted oil tanker pipeline proposal on an unwilling province. He is doing so with new proposed legislation to override provincial health and safety concerns, with billions of dollars in subsidies from taxpayers, and even with threats to call in the military. Nothing appears to be off-limits to Ottawa’s pipeline-evangelizing prince and his minions.

Ironically, it is not local protesters who are violating the rule of law. It is Kinder Morgan’s cheerleaders, those who hypocritically pontificate about the rule of law, who actually are undermining it. They do so by trying to pre-empt court challenges, invalidating provincial regulatory processes, and intimidating concerned citizens who are merely exercising their constitutionally protected rights to protest. Those are the actions that threaten the rule of law.

"Stepford Wife" Liberals need to ask themselves what their revered leader is doing - to British Columbia, to the country and its future, and to the Liberal Party.

For fifteen years the BC Libs provided a corrupt government yet the only major rebellion was over a lost hockey game. Do you think that corruption from the other side of the mountains will make a difference?


It seems a lot of people think so, Toby. I went to one anti-tanker protest/demonstration outside our town hall. It was surprising that most of those who turned out were grey-hairs and I went about talking to several. Without exception they were mild-mannered, lifelong law-abiding citizens who had never done anything like that but felt that this project, worsened by Trudeau's double dealing, had crossed a personal line for them. I suppose many of them were grandparents. They didn't relish the idea of civil disobedience but seemed willing enough to get arrested.

A stirring call to arms, with ample justification. When a government no longer represents the people, the people have the high moral ground.

In BC and other places corruption means profit.
Profit will be tolerated above all other actions.

Here in Nanaimo BC ; I hear no objection to KM other than the usual NIMBIES.
Informed opposition to KM is scarce if not none existent .

Christy Clark fought an election on 'jobs jobs,jobs, and it worked.
KM and it's supporters are claiming, again,Jobs , jobs, jobs; it will likely win again .

My only hope is that if the pipeline is built it will suffer from market conditions and fail miserably.

The farther one is from the coast the less the concern.

Politicians, KM and the media are busily promising jobs, jobs, jobs if the pipeline goes through. The general perception seems to be that without the pipe there will be no jobs, that there is no alternative. That's only true if the reigning government has no vision.

As an aside to this, David Climenhaga writes, "I am sure one of the impacts of this brouhaha is that future B.C. governments will make a priority of ensuring as little dependence as possible on Alberta for anything. The B.C. governments in question won't need to be New Democrats to act this way, as the lessons of 2018 will be plain to all."