Even the Globe Can't Stomach BoJo 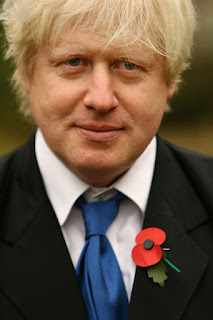 They did, however, manage to sum up Boris Johnson's disastrous week of blunders and reverses.


British politics today is what results from the collision of an unstoppable force, an immovable object and a clown car.

The unstoppable force is the dominant faction of Britain’s Conservative Party, which insists on not just an exit from the European Union, but the most catastrophic exit possible. It’s a plan for national self-defenestration. The immovable object is reality – the reality that a no-deal Brexit will play havoc with the economy and hurt real people; the reality that a majority of Parliament and the people will not back it; the reality that the Brexit-at-any-cost crowd can’t press the detonator without majority approval.

And the clown car is Mr. Johnson.

The Tories have transformed themselves into a protest party, even while continuing to govern a Group of Seven nation with a permanent seat on the United Nations Security Council. They’ve become increasingly monomaniacal in their Brexit obsession, and increasingly childlike. It’s an evolution that has reached its nadir in the premiership of Mr. Johnson.

...In 2016, the British people were asked what they thought of the idea of skydiving. In a referendum, they narrowly answered that, in theory, they’d be willing to give it a try.

For three years, the British government has claimed that it is close to reaching a deal with the EU and acquiring the wherewithal for making a safe-ish jump possible.

But the position of Mr. Johnson’s new government is that since Britain voted for the idea of skydiving, then skydiving there must be. On Oct. 31, Britain has no option but to jump out of a plane, parachute or no parachute.

As Teddy Roosevelt noted, “There can be no real political democracy unless there is something approaching economic democracy.” Like other Western countries, the UK has seen widening income inequality. According to the Office for National Statistics, "average income of the poorest fifth of the population after inflation contracted by 1.6% in the last financial year ending in 2018, while the average income of the richest fifth rose by 4.7%." Both political and economic democracy are broken.

The Brexit hardliners represent a faction of plutocrats whose goal is to profit off the ensuing chaos and social destruction. There's money to be made in privatizing the NHS and other government services and the upheaval of a hard Brexit will provide perfect cover for all the looting. These disaster capitalists know exactly what they are doing and are only "childlike" in their determination to get all the toys while others get none.

B. Johnson could be called a "yokel"?? Anyong


Your assessment of the Brexit inner-circle is spot on, Cap. From Farage to Johnson these plutocrats are ready to seize the bounty that chaos inevitably churns up for the plucking by the quick and well-positioned.


He's not a yokel, Anyong, even if he sometimes presents that way when it suits him. He's a thug.

All of this provides an object lesson into how and why once great political institutions die.


It could be, Owen, that this is not the demise of British democracy but its long-overdue restoration.

I hope you're right, Mound.

Perhaps so.
The English ( as opposed to) British have a never ending class syndrome that never fails to elevate one group of people at the expense of others.
The sad thing is that many of those thinking themselves 'better' than others are not!!

The English have a habit of "snocking" (my Newfoundland word) down their noses. Since I was born there, worked there and one half of my family was educated there including my mother, I have first hand experience of the "working class syndrome" at practice in England. In North America, all one has to do is have at least $500,000 in a chequing account earned by hook or crook enabling a certain "clean up". Either way, stupidity finds its way into Government from those who now crave recognition of voicing their stupidity. There is nothing so blind as those who don't know that they don't know. It's called The Dunning-Kruger Effect=a cognitive bias in which people mistakenly assess their cognitive ability as competent who are unable to recognize their own incompetence. Anyong