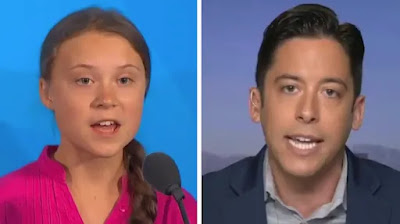 The jackals at Fox News went spinning out of control at Greta Thunberg's address to the United Nations.


Fox News has apologized after a guest criticized the teenage climate activist Greta Thunberg as a “mentally ill Swedish child”.

Appearing on Fox News on Monday, the rightwing commentator Michael Knowles launched an extraordinary attack on Thunberg, 16, who is campaigning in the US to urge action on the climate crisis.

Knowles’s swipe at Thunberg followed one from Laura Ingraham, one of Fox News’s most prominent presenters, who compared Thunberg and other young climate activists to the characters in Stephen King’s horror story Children of the Corn. 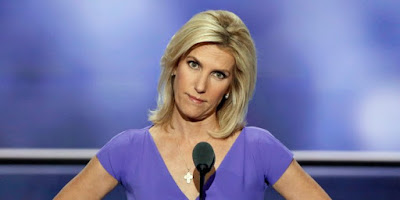 Knowles may have lost Fox (we'll see) but Laura Ingraham could have lost her brother.


Ingraham used her show The Ingraham Angle to suggest, incorrectly, that Thunberg wanted people to “cede control of our economy, our way of life, our way of transport, how many children you want to have, and if we don’t go along, we will be punished by our own children.

“Does anyone else find that chilling?” Ingraham said.

He said: “Clearly my sister’s paycheck is more important than the world her three adopted kids will inherit.

“I can no longer apologize for a sibling who I no longer recognize. I can and will continue to call out the monstrous behavior and the bully commentary born out of anger.”

I don't suppose Greta taking a couple of weeks to cross the Atlantic by yacht and wind power impressed the nutballs at Fox News either. She refuses to fly by jet. Elon Musk, who turns out Tesla electric vehicles and thinks himnself a prime Greenie, infamously flies 280 times per year on his private jet.

Here's an article inspired perhaps by that yacht trip, about how the really rich lord it over us emitting excessive CO2 by swanning around in private jets. The argument is to ban private jets altogether as unnecessary.

.. we may need to redefine 'lost the picture', 'augered in'.. for the sad folks with 'the wrong stuff' .. deary me.. but one hopes folks of similar stupidity are never allowed to pilot commercial aircraft or be aircraft controllers.. that would be murder writ large.. but we're OK letting them be navigators for Canadian society ? And take us on a tour downriver towards a Niagara Falls.. what ??