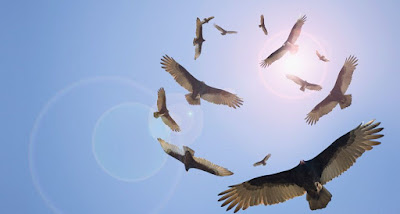 Guardian scribe, George Monbiot, sees a dark ideology at play in the political ranks of Brexiteers who would be happy with a 'no-deal' Brexit.


We make a mistake when we assume that money is the main motivation. Our unreformed, corrupt and corrupting political funding system ensures it is an important factor. But what counts above all else is ideology, as ideology successfully pursued is the means to power. You cannot exercise true power over other people unless you can shape the way they think, and shape their behaviour on the basis of that thought. The long-term interests of ideology differ from the short-term interests of politics.

This, I believe, is the key to understanding what is happening today. The Brexit ultras in government are not just Brexit ultras. They are neoliberal ultras, and Brexit is a highly effective means of promoting this failed ideology. It’s the ultimate shock doctrine, using a public emergency to justify the imposition of policies that wouldn’t be accepted in ordinary times. Whether they really want no deal or not, the threat of it creates the political space in which they can apply their ideas.

Neoliberalism is the ideology developed by people such as Friedrich Hayek and Milton Friedman. It is not just a set of free-market ideas, but a focused discipline, deliberately applied around the world. It treats competition as humanity’s defining characteristic, sees citizens as consumers and “the market” as society’s organising principle. The market, it claims, sorts us into a natural hierarchy of winners and losers. Any attempt by politics to intervene disrupts the discovery of this natural order.

...Johnson uses neoliberal framing to justify his attacks on public safety. He wants to pull down environmental standards, create free ports in which businesses can avoid tax and regulation, and strike a rapid trade deal with the United States that is likely to rip up animal welfare rules and threaten the survival of the NHS.

He rages against red tape, but the real red tape is created by the international trade treaties he favours, that render democratic change almost impossible, through rules that protect capital against popular challenge, and shift decision-making away from parliaments and into unaccountable offshore courts (“investor-state dispute settlement”). This explains the enthusiasm among some on the left for Brexit: a belief that escaping from the EU means escaping from coercive trade instruments. In reality, it exposes us to something even worse, as the UK enters negotiations with the US, holding a begging bowl.

Monbiot has explained the incoherence always evident in the ideology. It was never a system of ideas that anyone actually held to be true, but simply a marketing tool employed as a component of the business plan.


I think you're on the money there, John.

Monbiot is merely repeating what I've in read on alternative web sites for years. Often a bit incoherent and not well-written, it needed a structured approach to fully explain what neoliberalism is and how it developed.

In my view, CBC Radio's Ideas program has been a standout in explaining many things over the years. I try not to miss it. Under the guise of intellectualism, our dear old CBC has been as avant garde as any alternative progressive website, and a great deal more professional in explanation and coherence. I try not to miss the program. Right now it is undergoing change as the second long term host has retired.

So here's a link to some decent stuff on neoliberalism, and an hour long program. Not only that, there is a full-page precis of several thousand word. Neoliberalism started during WW2, by the way, and the snooty outlook of market fundamentalists will astonish all the serfs of the West:

What does the word "neoliberal" mean? Let's break up its component parts. "Neo" means "new" and "liberal" means "liberal".

Putting them together you get "New Liberal."

The first "New Liberals" to come out of the closet were Bill Clinton, Tony Blair and Jean Chretien. They were "third way" liberals. Clinton called himself a "New Democrat."

The idea of the neoliberal was to strike a "balance" between the neoconservatism Reagan, Thatcher and Blair (based on Friedman's far-right economic reforms) and post-war liberalism of John Maynard Keynes.

Of course, as history shows, their 'compromise' was to expand on the hated neocon economic reforms: free trade, tax cuts, deregulation, spending cuts, neocolonialism and war-profiteering.

Neocon/neoliberal reforms have decimated Europe's high living standards. They made Canada more like America. And America more like Latin America. If we had expanded on Keynes, living standards across the West and their colonies would've been rising this entire time! The world would be a much different place!

The EU is a neoliberal organization designed to impose Friedmanian economic reforms on social-democrat countries whose people would never vote for them.

The euro (common currency) was designed by a Friedmanian who believed national currencies were ideal. It was designed to take a wrecking ball to European living standards allowing Euro-oligarchs to plunder the wealth of the people.

Looks like neoliberals are back in the closet. But you will know them by what they do!

The Guardian: Robert Mundell, evil genius of the euro
https://www.theguardian.com/commentisfree/2012/jun/26/robert-mundell-evil-genius-euro

Exactly what "deal" does Bojo want? I've never seen it laid out.

The UK has been often been rumoured to be the capitol of money laundering/tax evasion. (I know personally of a Channel Islands tax scam that the UK/Cdn govt allowed.)

The "neo-liberal" label relates to the late 20th Century iteration of the perspective on economic issues taken by the original laissez-faire guys, who with respect to those issues were identified as "liberals". Though the label may fit at times as much as it does to practically anyone who doesn't call himself a "socialist", the third-way guys are a somewhat different type of "New Liberal".