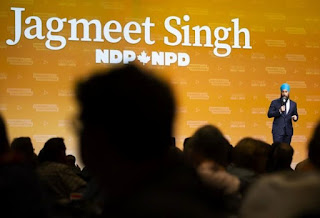 Is this the 'Jagmeet Singh effect' in action?

Fourteen disgruntled former New Brunswick NDP candidates are defecting and throwing their support behind the provincial and federal Greens — a move unlikely to spark confidence in the federal New Democrats on the cusp of an election call.

The 14 former provincial candidates announced their exodus in a media release sent to CBC News today. They also are expected to hold a press conference in Moncton this afternoon to submit their membership applications to New Brunswick Green Party Leader David Coon.

In their declaration of support, the members note that federal Green Party Leader Elizabeth May has visited New Brunswick, while NDP Leader Jagmeet Singh hasn't set foot in the province since winning the leadership back in 2017.

The shift means Singh's NDP can't turn to any of those provincial candidates to run in federal ridings in the upcoming election campaign. The federal party doesn't have any candidates nominated in New Brunswick at the moment, according to the party's website.


NDP operator, Cam Holstrom, was predictably nonplussed. These Dippers were just losers anyway. Who needs 'em? Better off widdout 'em.
Posted by The Mound of Sound at 12:27 PM

getting elected to the leadership of a party is one thing. to win an election is a whole other ball of wax.

The real bloodletting, of course, will come after the next election, Mound, but I do wonder who the NDP will get to run for the leadership next. Nathan Cullen would be a good choice, I think, but it seems he is taking some time off.

@ Lorne.
I think that the NDP have taken too much time off.
Gender equality, equal rights,civil rights or what have you will not win an election.
Those things should be attended to , after winning an election.
The NDP have a major issue which is lack of conviction.
They have no alternative platform than opposing the current one.
Sadly they offer no solutions to the modern worlds complex issues.
Fighting for LGBT rights is a noble cause but is not an election manifesto.

Love them or hate them , the Greens have vision, which is sadly lacking within Canada.

Jagmeet, we hardly knew ye. He's the dog that caught the car.

Re,
Jagmeet, we hardly knew ye. He's the dog that caught the car.

Leading a party that missed the bus!

You can't find your way to bus stop when you've got your head up your ass.

Maybe these now former NDP'ers read Bill Tieleman's latest article (and the comments on it) at _The Tyee_, and came to the realization that the NDP isn't worthy of their support. https://thetyee.ca/Opinion/2019/08/29/Social-Democracy-Falling-Star/


Bob, I have little truck with Tieleman. I find him disingenuous and self-serving. I've never supported or voted NDP but David Lewis taught me to respect it for what it was and how it served Canada. This guy, IMHO, is not of that creed.