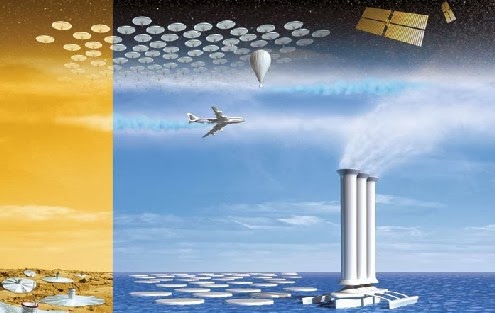 There's a growing body of opinion supporting geoengineering as humanity's last-resort salvation from catastrophic climate change.  To many it's not a matter of it but when we go the geoengineering route and which of several options we'll choose.  Given the near total shift in focus from mitigation - large scale greenhouse gas emissions reductions - to adaptation strategies, geoengineering would seem a logical path.

Except that like many untested notions, geoengineering is premised on the assumption it can work.  What if it not only won't work but could in fact make the problem immeasurably worse?

Researchers from the Helmholtz Centre for Ocean Research in Kiel, Germany have explored the five recognized geoengineering options and contend that, at best they won't make much of a dent in global warming  and, at worst, they may trigger runaway side effects that we will be unable to control.

The potential side effects would be potentially disastrous, say the scientists, writing in Nature Communications. Ocean upwelling, or the bringing up of deep cold waters, would cool surface water temperatures and reduce sea ice melting, but would unbalance the global heat budget, while adding iron filings or lime would affect the oxygen levels in the oceans. Reflecting the sun's rays into space would alter rainfall patterns and reforesting the deserts could change wind patterns and could even reduce tree growth in other regions.

In addition, say the scientists, two of the five methods considered could not be safely stopped. "We find that, if solar radiation management or ocean upwelling is discontinued then rapid warming occurs. If the other methods are discontinued, less dramatic changes occur. Essentially all of the CO2 that was taken up remains in the ocean."

Even the foresting of deserts on a massive scale could prove disastrous if the irrigation needed to grow the trees were stopped, they say. "The desert regions would eventually return to desert and the carbon that was stored in the plant biomass and soil would slowly be returned to the atmosphere through decay and respiration," says the paper.

The researchers conclude that some geoengineering technologies could help as an aid to mitigation but none offers any silver bullet solution.

"The paper sounds a timely warning about the abject stupidity of relying upon climate engineering solutions when reducing our reliance on carbon-based energy systems is the only sensible option," said Dr Matt Watson, a lecturer in geophysical natural hazards at Bristol University.

When the white people first appeared, the elders of my people recognized in a few of the white people a frightening mental illness: greed. It drove those people to want more and more and more. Far more than they needed. Far more than any person would ever need in their entire lives.
And now, this illness has driven all of the earth's population to this point.
The elders had no cure for those people afflicted with this illness. Or rather, the afflicted white man already had good cures available, but these people did not avail themselves of them.
We all need less in this world. We need less luxury. We need less sprawl. We need less pollution. We need less of the shit they dig out of the earth, and more trees and plants planted back into it. We need less of this civilization and we need more nature. We need far less of what we don't need, and probably we could do with a little less of what we do need, too.
We need to learn to make do with less, because in the harsh future I see coming headed straight at us, we'll have to do so, regardless of what we want.

Incidentally, there's a march at the Vancouver Art Gallery on March 1st, starting at 1pm, if you're able to make it.
Omnibus March Against Harper

I probably won't be able to make it, considering I live so far away.

The reforestation option might not be so bad. Yes, our primary approach needs to be quitting with the greenhouse gases, and this in any case has a big set of side benefits (no fricking pipelines, for instance, no mountaintop removal coal mining, better air quality, all that).

But it seems clear we've come so far that an extra bit of pull-back would be welcome--if it wasn't some kind of engineering gimmick that relied on treating a complicated system full of feedbacks as it were a simple physics box with three things in it, and on being able to predict the impacts of doing something completely new in the immensely complex place that the world is.

But having far more trees than we currently have is a state the world has often (even usually) been in before. And most of the world's deserts are geologically quite young. I think reforesting wouldn't be quite as vulnerable as these guys are saying. Forests tend to have an effect on rainfall and groundwater patterns just by existing; they might well be more self-sustaining than one would expect.

Hey, Troy. I don't think I'll be able to make it. I'm tending to my beagle who's on his way out. I don't know how much longer he's got but...

@PLG - I think the worst and usually unmentioned part of geoengineering is the prospect of powerful nations going rogue; acting independently with options they believe suit their circumstances without regard to consequences that may be borne elsewhere. For some reason Russia and the U.S. come to mind. Not sure why.