Revealed - the Two Faces of Tony Blair. They're Both Ugly. 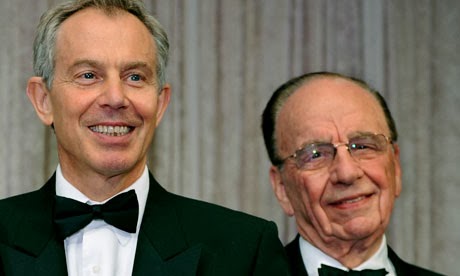 A lot of people realized when Tony Blair jumped aboard the Bush/Cheney bandwagon to conquer Iraq that he was a two-faced weasel.  Now, courtesy of Rupert Murdoch, any lingering doubt about Blair's integrity has been erased, obliterated.

Former British prime minister Tony Blair offered to act as a secret adviser to Rupert Murdoch during his media empire's phone-hacking scandal, suggesting the firm follow steps he took to calm public anger over the Iraq war, a London court has heard.

Rebekah Brooks, the ex-boss of Murdoch's British newspapers, wrote an email to Murdoch's son James detailing advice Blair had given her during an hour-long phone call in July 2011 at the height of a furore over phone-hacking allegations at the media mogul's News of the World tabloid.

"He (Blair) is available to you, KRM and me as an unofficial adviser but needs to be between us," said the email from Ms Brooks to James Murdoch, who at the time ran News Corporation operations in Britain. KRM refers to Rupert Murdoch's initials.
Ms Brooks said Mr Blair had counselled: "It will pass. Tough up." Four days later she quit her job and she was arrested by police two days after that.

The email was sent the day after News Corporation closed the 168-year-old News of the World in the face of huge public anger over revelations that its staff had hacked into the voicemail messages of a murdered schoolgirl.

Mr Blair's suggestions to Ms Brooks contrast with a public statement he made three days before their phone call, when he had denounced the hacking scandal as "beyond disgusting".

The email also demonstrates just how close Ms Brooks and Rupert Murdoch were to Britain's elite, a relationship critics said allowed him to use his British newspapers to influence politicians for the benefit of his business interests.

He was always a slime. Seems to have singlehandedly accounted for about half the nails in the coffin of the Labor party (as a Labor party, not in terms of electoral success).

You cant mention Tony Blair without a word from Doctor David Kelly.

Blair has a glaring insecurity about his relevance and keeps trying to insinuate himself where he's not wanted. The EU had to tell him to shove off. He's such a weasel I doubt there are many who would trust him.

Yes, Steve, Dr. Kelly. That is an indelible stain on Blair.