He Can Always Go Back to Israel 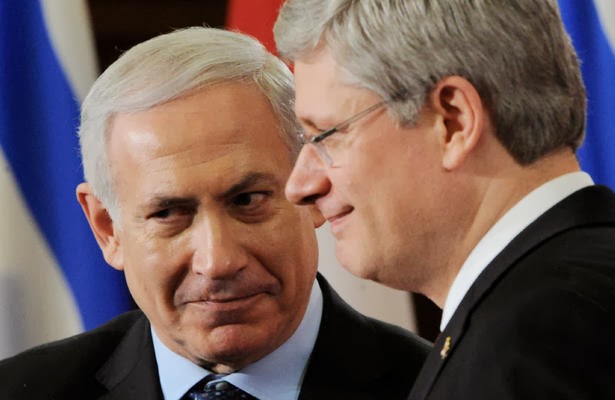 It looks as though Stephen Harper won't find much love when he travels to Mexico for the upcoming North American leaders' summit.

American officials have already bluntly warned Harper not to pester Obama over the Keystone XL pipeline.  It was a pretty embarrassing putdown for the Prince of Darkness of Sussex Drive.

Now word is getting out that Harper might get the cold shoulder from Mexican president Enrique Pena Nieto over the Harper government's decision not to life the visa requirement for Mexican visitors to Canada.

Poor old Steve Harper.  The Euros think he's garbage.  They know bullies when they seem them.  South Americans aren't crazy about Beelzebub either.   He's not their cup of tea.  He's scoring no points with the Muslim world or the U.N. General Assembly for that matter.

Harper's world is shrinking fast.  What's left?  Oh yeah, Beijing and Tel Aviv.  He's always got the Politburo except every time he gets together with them he comes back unable to remember who took his pants.  If all else fails, there's Harper's BFF, Benjamin "Bibi" Netanyahu.

So if the political climate gets too chilly in Mexico, Steve might want to hop a flight to Israel.  Who knows, maybe he might even stay there.

Maybe a Mexican patriot will shoot him for us.

I don't know if you have seen this, Mound, but it explains much about Harper and his affinity for Israel:
http://www.thebeaverton.com/world/item/1116-israeli-prime-minister-stephen-harper-returns-after-long-visit-in-canada

its not nice to tease old ladies, he might go and stay in Israel? Nice for us, but what did the citizens of Israel do to deserve him. anyhow the thought of him moving to Israel is something to dream about, as oil can stevie dismantles our democracy, as we knew it.


You'd think with all the foreign workers coming to Canada, you'd think oil can stevie would welcome people from Mexico. Of course they are catholic and perhaps he doesn't like them as much. Ah, well lets hope the trip to Mexico gives him a nice case of Mexican revenge. he can spend all the time he wants on his white porcelain throne.

Lorne, thanks for the link. I always suspected...

As for your last remark, Harper is known to frequently duck out to the can while on these overseas junkets. I think there have been two instances where the leaders were assembling for the obligatory group photo and had to wait because Steve had barricaded himself inside the crapper.

He doesn't mind guest workers as long as they stay vulnerable and impoverished. No "rights", or any of that garbage. They have to be really easy to deport the moment their employer gets annoyed with them for any reason, from trying to insist on being paid what they were promised to refusing to sleep with the boss.

The hope is that if he cuts EI enough and keeps unemployment high enough and employers have these foreign temps as an alternative, local Canadian workers too will be too vulnerable and impoverished to annoy their employers for any reason. The ideal is a country of guest workers--if he could ship us all out the moment we annoy a boss, he would. Indeed, you could see the recent "Minister can cancel citizenship" bill as the first step in that direction.

So. Mexican guest workers, fine, but they gotta be at the mercy of the bureaucracy, they gotta need lots of paperwork which can be lost or rejected for any defect or none in particular. Hence the visa requirement. As it happens, I know a Mexican in the process of immigrating. They lost his paperwork and charged him $1000 to do it over again (on top of resubmitting everything of course). There was no question that they were the ones who'd screwed up--it got lost while they were moving offices, they admitted it freely. But he was the one who had to pay all over again and wait months all over again. Why? Because a major objective of the system is to keep people precarious.

I'd be pleased except that Harpo's incessant diplomatic footbullets are dragging us all down with him. Remember back when we used to be cool? Look at us now.

I agree with Elliot. As much as I love to see the Harperbot suffering from Hoof in Mouth disease he's also making the human population of this country look bad. I would just prefer it if he had a massive and fatal systems failure while he was having his batteries changed.

I believe differently. I don't trust the Mexico, US and Canada spats. Big business is pushing for the NAU. Corporations only want one government to deal with, rather than three.

Americans Wenzel and Parker directly participating in two Conservative campaigns. Front Porch Strategies, accused of the robo-calls from out of the US.

American Police operating in Canada, exempt from our laws.

Obama hammering out Obamacare, similar to ours.

Flaherty bringing down Canada's cost of living, in line with the U.S.

I think the Keystone flap, is just a flap.

Harper quietly working on the TPP, which is said is, another corporate give-a-way.

Corporations demanding cheap labor and wanting a, huge cheap labor pool. Which they would have if, the three countries merge. Harper is killing unions by, bringing over his cheap foreign labor.

I have been tracking the meetings of the 3 Amigo's, for some years.

Read: Harper gives a speech in New York at the, Council of Foreign Relations. This was Sept 25/2007. Harper fully endorsed the NAU.

I will be more than pleased if, someone tells me, I have it all wrong and that, I am just a skeptic. And um, I detest Harper and always look for the worst from him.

Harper's Omnibus Bill that permits China to sue Canada if, anyone tries to block China's intrusions into our country. Elizabeth May warned us of Harper's underhanded tactics.

Harper bringing thousands of Chinese over for his, Northern BC mining plan.

800 hectares sold near Prince Rupert to China. That is where
China is to build their LNG plant.

Fadden of CSIS at that time warned, of Communist China's huge inroads into Canada. BC was specifically mentioned as, Campbell had already given much of BC to China. Harper's sellout of BC to Communist China began way back in, Gordon Campbell's reign of terror in BC. Campbell shipped BC mills to China, along with BC's raw logs. He also sold BC mines to China.

So, I found Harper and China's spats, as silly too.

Mound, that *was* the nice the version.

Doesn't the religious sect slithery steve belongs to want Israel to be destroyed so he , like Mohammed, can be raptured?

His world is shrinking. Soon he won't be able to find a place to park.

Anon 3:23. Harper might be just fine with some form of continental integration but the Canadian public wouldn't tolerate political union.

Anon 3:46, I agree that we don't know the degree of Harper's involvement with the Chinese.

Rumley, no, that's not quite right. They want Israel to reclaim all its old lands, including southern Lebanon, to clear the way for Armageddon. Once that's done they want the Jews to grab the lifeboat of Christianity. Jews that don't dig Jeebus can burn in Hell but they'll have only themselves to blame.

Owen, my thoughts exactly. Yet Harper has never been a "people person" and has been reluctant to forge personal alliances. I doubt there are many who would trust him.

Can't you just see it...President Stephen Harper...of all of North America. F--u--n--n--y! But who knows at this point what is going on in his mind. After all he did say in his famous Montreal Speech which can no longer be found on line...Canada is nothing but a welfare state. Anyong

Wow, Anyong, has he really purged all trace of that speech from the web? I had my suspicions but wasn't sure. Thanks.