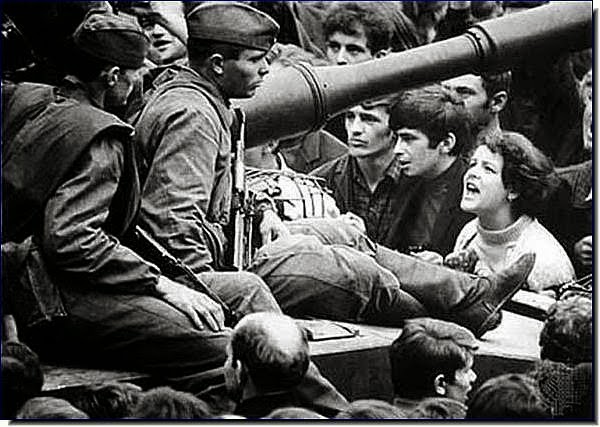 Ukraine's pro-Russian president, Viktor Yanukovych, has been sent packing.  The parliament has turned on him and proclaimed him constitutionally unable to carry out his duties.  It is being reported that jailed opposition leader and former president, Yulia Tymoshenko, has been sprung from prison and reunited with the anti-government faction.

Yanukovych has gone into hiding but not without first making a television appearance in which he condemned his ouster as a coup d'état.

Hovering in the wings is the Kremlin which views a pro-Russia Ukraine as almost indispensable.  Rumblings out of Moscow, while restrained, sound just a bit ominous and harken back to the Hungarian revolution of 1956 and the Czech revolution of 1968, both of which were crushed beneath the treads of Soviet tanks.

Russian Foreign Minister Sergei Lavrov on Saturday expressed his "most serious concern" over what he said was the failure of the Ukrainian opposition to deliver on its February 21 deal with President Viktor Yanukovich.

Yanukovich agreed to sweeping concessions under the peace deal - clinched with the mediation efforts of the foreign ministers of France, Germany and Poland - that include early elections as well as a reduction of presidential powers.

Lavrov spoke on the phone with the European Union trio on Saturday, according to a statement released by the Russian Foreign Ministry, and expressed to them his "most serious concern" about the latest developments in Ukraine.

"The opposition not only has failed to fulfill a single one of its obligations but is already presenting new demands all the time, following the lead of armed extremists and pogromists whose actions pose a direct threat to Ukraine's sovereignty and constitutional order," he told his counterparts.

Could Putin intervene in the Ukraine as the Kremlin did in Hungary in 1956 and Czechoslovakia in 1968?  It seems unthinkable today but Russia did invade Georgia in 2008 to force then president Saakashvili to drop Georgia's claims to South Ossetia.  Back then Putin claimed his forces were 'peacekeepers.'

If the tanks roll in before the Olympics is completely over the International Olympic Committee will issue a press release saying they are not political and will not comment.

The situation in Ukraine is complex to say the least. The Americans have admitted to spending billions of dollars in Ukraine over the last few years to "promote democracy"--which is to say, create pro-West "coloured revolutions". The protestors are a very mixed bag. Many have real grievances, some seem to be paid, and influential sections to whom the Americans are cozying up are virulently anti-Semitic fascists.

There are complex divisions in Ukraine. One of the simpler is that on one hand you've got a bunch who can't stand Russia, on the other you've got a bunch of around equal size who are Russian. Especially in the Crimea, which only became part of Ukraine under Khrushchev. But it's not the only one, and not all the people currently demonstrating in the streets care about the apparent proximate causes of all this, like the EU or for that matter democracy.

I'm not at all convinced a pro-EU group are likely to have any more ability to command majority opinion than the current gang, nor that they are likely to be less corrupt, more pro-democracy et cetera. It's likely they're just going to swap exactly who is putting people in jail and who is out in the streets.

Meanwhile, from Russia's point of view, what this is all about is the US trying to mount a soft coup on their doorstep, AGAIN, so they can get NATO bases right next to Russia. If I were running Russia I would sure as hell be brushing off and updating the military contingency plans, because there is no fucking way I'd be about to let the Americans sit bombers and missiles and "missile defence systems" in the fucking Ukraine.

On a side note, it's odd that the particular policy that apparently sparked all this, the EU deal that the now-deposed guy refused, was actually a terrible deal which the Ukrainians would have been fools to go for.

Agence France-Press has a spec piece about whether Putin is out to rekindle the Cold War.

Ol' Pooty-poot ain't going to allow the Olympics to be a "success" just to lose face, power, and god knows how many rubles over a plum like the Ukraine. He won't move for a bit; the Games will finish, things may calm down in Kyev for few weeks, but then he'll declare the Ukrainian parliament's actions an unconstitutional a coup d'etats, he'll play the terrorism card, and then the T-90's will roll.

There are some things about the whole mess that make me look at it a bit sideways. I'm not clear why the Ukrainians want to sign on with the EU when the EU's favourite pastime seems to be handing out crippling austerity programs to countries the most likely to be hurt by them. Would the Ukraine be next in line?

I'm also concerned with persistent reports that some of those pushing hardest for the EU side have ties to right-wing nationalist and neo-Nazi groups such as Svoboda - an extremist, ultra-right wing, anti-immigration, anti-LGBT, anti-choice, anti-Europe, Ukrainian nationalist party that does hold some position in the parliament http://www.ibtimes.com/euromaidan-dark-shadows-far-right-ukraine-protests-1556654.

It could very well turn into an ugly, impossible choice for our Ukrainian friends: side with the EU who'll likely dictate economic terms - possibly harsh ones - for decades to come, or surrender to the iron-fisted, punishment and violence prone demagoguery of Vladimir Putin and a hopelessly corrupt puppet president.

Apparently, Neil, the U.S. has been pretty shamelessly manipulating the dissent in Ukraine and that's bound to inflame Putin.

As an aside, I finally got around to reading my copy of the November 11th Aviation Week, a special "double issue" that focused on nuclear weaponry. Ironic that the issuance was Remembrance Day. All through December and January I looked at the cover but, until this past week, couldn't bring myself to read it.

As I read through all the articles about who was developing what and how particular bombs and delivery systems were being modified and upgraded, I was left with the chilling realization of how close we're coming to a return of the Cold War. The hawks in Congress provide about all the excuse hawkish Putin needs to declare "game on."

We need to be very clear-headed about what's going on lest we back ourselves into another cold war.

@ PLG - I've been reading suggestions about partitioning Ukraine which, from what I read, is geographically divided on this issue.

You break it, you buy it.

It'll be turned it over the nationalists-cum-fascists that are sure to emerge victorious in the announced upcoming election, should the west not move immediately to save the country from impending turmoil.

By the by, I don't think the west will do a blessed thing to help Ukraine. If Liberal minded people think what is going on there today represents some kind of victory (as in "the enemy of a friend of Putin must be my friend" kind of way) then look at Hungary today (2013), which is led by a far-right crypto-fascist party, and where the opposition is a blantantly fascist party.

Well put, Chris. I can't imagine the west being willing to risk any confrontation with the Russians should Putin decide to send in troops to 'secure' Ukraine.

Now that the Os are over, wouldn't be surprised if the tanks rolled. On the other hand, it would cost a few rubbles and Putin has spent a lot on the Os. He may not want the Americans sitting on his door step, on the other hand Putin, still has rebells in his own backyard. Fighting on two fronts is never fun.

It might be best if Russian and the U.S.A. came to an agreement to leave Ukraine alone and leave it as a some what "neutral" country, like a buffer zone., No one gets it.,

The Europeans at the policy level don't seem to care about masses of poverty-stricken Eastern Europeans migrating westwards. If they did, they wouldn't have been busy breaking Eastern European economies. If anything I suspect a lot of the top dogs secretly love the idea--a big disposable workforce used to settling for hardly anything, perfect for driving unemployment up and wages down, breaking unions and all the other class war stuff they're trying to do with austerity anyway.