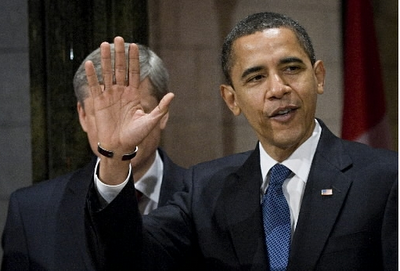 The White House is putting Stephen Harper in his place before next week's North American leaders' summit.   The word, delivered by senior Obama officials, is "don't call us, we'll call you" when there's anything to discuss about the Keystone XL pipeline.

"What President Obama will do is explain to him where we are in the review ... and indicate that, of course, we'll let our Canadian friends know when we've arrived at a decision," one official said.

"Frankly, the message that he'll be delivering is quite similar to the one you've heard from us publicly."
Posted by The Mound of Sound at 1:11 PM

lol, I love that harpers meglomania will have to take sucha blow.

That it took this long for the Obama people to snub Harper is just another sign of their inefficacy.

Harper should have been snubbed (or stronger) immediately following Obama's first swearing in for attempting to interfere in a US presidential primary race.

California is on the verge of an epic drought, its backup systems of groundwater reserves so run down the losses can be picked up by satellite orbiting 400 km above the earth (Guardian). Obama recently sent the state millions to help deal with the crisis. I don't think he is going to approve the pipeline. It's reputed to be going to cost Canadians 20% more on their food bills. That'll help consumers.

Harpo and Obama are a pair. Obama is a little more folksy about it but every bit the ideologue. He is just playing hard to get. I bet the deal is already rubber-stamped. Honestly I don't know why they aren't golfing buddies.