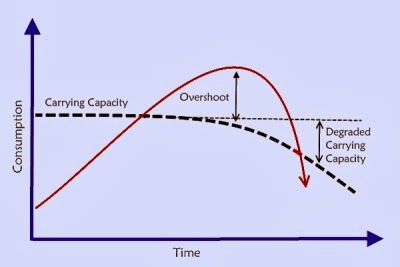 Never in our 50,000 year history have humans been so prosperous, so advanced, so wealthy.  We owe a good deal of that to our mastery of cheap fossil fuel energy over the past two centuries.  We discovered how to extract fossil carbon energy that had been laid down and amassed over many hundreds of millions of years and put it into our service in such a tiny fraction of the time it took to create.  We used it to build the wealth we have achieved today.

Yet burning fossil fuels is just one component, albeit a major one, to our wealth.  Indeed our prosperity has also depended on our willingness to rapaciously exploit natural capital and freely abuse our environment.  Today's climate and the early-onset climate change impacts we're seeing constitute one giant, atmospheric I.O.U. that will very soon be called.

A new article from Scientific American says our burgeoning prosperity is the result of burning the candle from both ends:

...what can be expected if the world increases the wellbeing of an ever increasing proportion of people? In short: even more CO2.

That's the finding of a study in the journal Nature Climate Change.

Economists and policy analysts held out hope that global wealth could continue to rise without also raising CO2 emissions. But a look back at life expectancy at birth compared with per capita pollution around the world from 1970 to 2009 suggests otherwise.

Economic development in the poorest countries starts off by reducing CO2 pollution in the 1970s and 1980s, perhaps because fossil fuel burning replaces even more polluting fires in individual homes. But in more recent years that benefit has leveled off. And developed countries like the U.S. or China seem to increase emissions whenever the economy grows.

CO2 emissions are one unresolved cost of our prosperity but only one.  As we grow in wealth our demands on natural capital of all forms increases.  We need more water to grow the better food we want at our table and even more water yet for industry to produce the consumer goods we wish to enjoy.  We generate more waste and use more fertilizers and chemicals that, in due course, work their way back to the environment for natural processes to cleanse.

The net result is that we're moving into environmental overshoot at an accelerating pace.  We're already consuming better than 1.5 planet Earth's supply of renewable resources.  We're achieving that remarkable feat in a variety of ways, none of them good.  We're exhausting our groundwater reserves.  We're wiping out one global fishery after another.  We're steadily accumulating pollution in our soil, our fresh water and our atmosphere because we're exceeding nature's ability to absorb and cleanse our waste products.

Yet we in the developed world show no inclination to sacrifice some of what we have so that others, less advantaged, can have more.  To the contrary, we're now land-grabbing the best agricultural land in countries that can already barely feed their own people and often fall back on us for famine relief.  What kind of mentality condones that?  So, as the emerging economies struggle to climb the prosperity ladder, they'll take from us what they can and follow our example of environmental overshoot wherever they must.  And the flame burning at both ends of that candle is about to get a lot hotter.

None of this matters now that Seymour Hoffman is dead! This world is fucked and it won't be that long before we are back in the dark ages; only they will be vastly more brutal.Civilization will die but not it's weapons.