Will Christie Clark Infect British Columbia with the Alberta Disease? 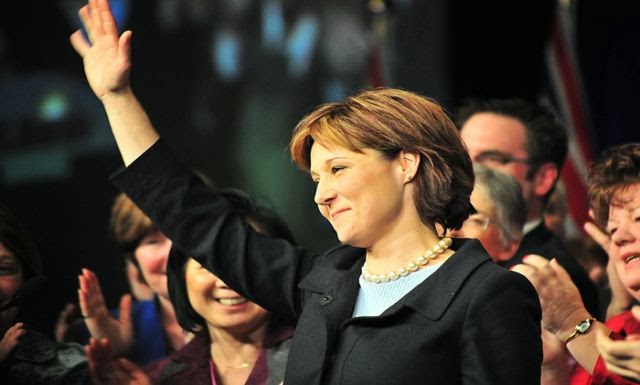 When a government mired in debt and deficits allows itself to become dependent on royalties from a non-renewable resource to make up 30% of its general revenues it might just as well go for the meth pipe.  It's an addiction that cannot end well.

There are unsettling indications that Christy Clark may be looking to hit that pipe herself only with British Columbia's fracked natural gas filling in for Alberta's bitumen.  While Clark's government claims to have a balanced budget, that's propped up on a lot of tinkering and wishful thinking.

Clark has said the provincial government's windfall royalties from the LNG business would be used to retire British Columbia's debt.  That's expected to hit about $70-billion, almost half of which has been built up during Clark's premiership.

Finance minister, Mike de Jong, let slip that the LNG royalties, if and when they appear, may be headed into the government's books as general revenue.

“This is a revenue stream that begins once the facility has been constructed and once the product begins to flow,” he said. “We don’t see that happening within the life span of this three-year fiscal plan.”

We need to face reality.  Governments that use conjuring tricks to create the appearance of balanced budgets can't be trusted not to use non-renewable resource freebies to pad their current budgets in the future.  That's low-hanging fruit to a government like Clark's and it's irresistible.  It would be great to believe that B.C. could not follow Alberta and not get hooked on this to our long-term detriment but that's wishful thinking.

Grant sums this up very well in an excellent post today;
http://powellriverpersuader.blogspot.ca/

Mound, you have a Liberal Gov. I think it is worse than Cons.

I think she won her last election because of good looks.

I agree with that take, Inse. So does Andrew Weaver. He figures that B.C. is going to become a bit player, if that, in LNG once the Panama Canal widening is completed and the U.S. begins to flood the Asian markets. Grant foresees possibly three BC LNG plants. Weaver thinks it'll be two at most. I fear that she's already spending revenue that's never going to materialize.

LD, this government is conservative, very conservative. It doesn't have a 'liberal' bone in its body. She won the last election because her NDP rival let her control the narrative and turn the vote into a referendum on him instead of the tawdry record of her government.

Just a continuation of the trend of stealing future wealth to pay for the luxuries of today.

But the deeper reality is in a debt based economy "balanced budgets" don't exist. We will borrow further and further into the future or transfer the debt to infrastructure, under-funded regulation, or as we're doing now a combination of all 3. Just like Trudeau's "growth agenda" video (my response to which can be found here: http://canadiantrends.blogspot.ca/2014/02/i-guess-its-too-bad-everything-we-haves.html)

Liberal, or conservative, or NDP - it makes no difference. No politician has the will to tell the truth, no politician wants the house of cards to collapse on their watch. the reality we need to face is one no one wants to hear so let's just borrow more and hope for the best!

BC appears to have lots of natural gas. But we use it, for heating and cooking. We can also use it in trucks, busses, cars. And to generate electricity, if necessary.

So why should we be so eager to piss it all away?

Hugh, you and I are working from the same page. I find it offensive that any one generation believes it should appropriate any non-renewable resource to its exclusive benefit just because it can. The Norwegians rightly believe that their North Sea oil bounty belongs to future generations also and the revenues must therefore be preserved, invested and not be taken into current revenues.

The rush to 'piss it all away' is the hallmark of lazy, greedy, visionless government. Unless, of course, they believe that mankind is heading for a Thelma & Louise moment in which case moving as much as we can as quickly as possible makes some perverse sense.

Richard, not much for me to add but, again, you and I have been working from the same page for a good while now.

We sure have! And I'm awfully thankful for it.

Check out how many educational institutions and other public institutions aren't allowed to spend any of their budgetary surpluses so the Neo-Socreds can claim that money for their own books.

BC is in very deep trouble that any future governments may not be able to repair.