Denialists Are Not Skeptics, Even When You Turn the Planet Upside Down. 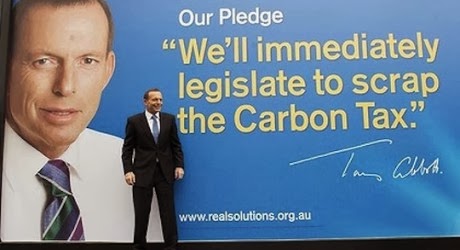 Maybe the time has come when the onus of proof should shift off the shoulders of climate science and onto the shoulders of the denialist community.   You say it's all a hoax then prove it.  You say what's happening now is just natural variability, then prove it.  You say that mankind isn't driving it, then prove it.  You claim to have all these grounds that undermine the climate change consensus.  Fine, just pick at least one and prove it.   Lay it all out there:  your theory, your research and supporting data, the conclusions you contend are supported by all that research and data and then let the science types assess it.  Of course, if you were going to do that, you would have done it by now.  The Koch Brothers (Gerhard und Fritz) would have popped for oodles of cash to fund that sort of research but, strangely, they haven't.  Skeptics have to work from something called demonstrable fact.  When they fall back on belief instead of fact then they're just facile denialists.

Case in point, Australian prime minister Tony Abbott.  He's a denialist, through and through.  Tony believes in things he imagines, just not facts.  His country has warmed up a lot over the course of Tony's lifetime.  In the course of the Tony Era, his already hot country has roughly doubled in average heatwave days per year. 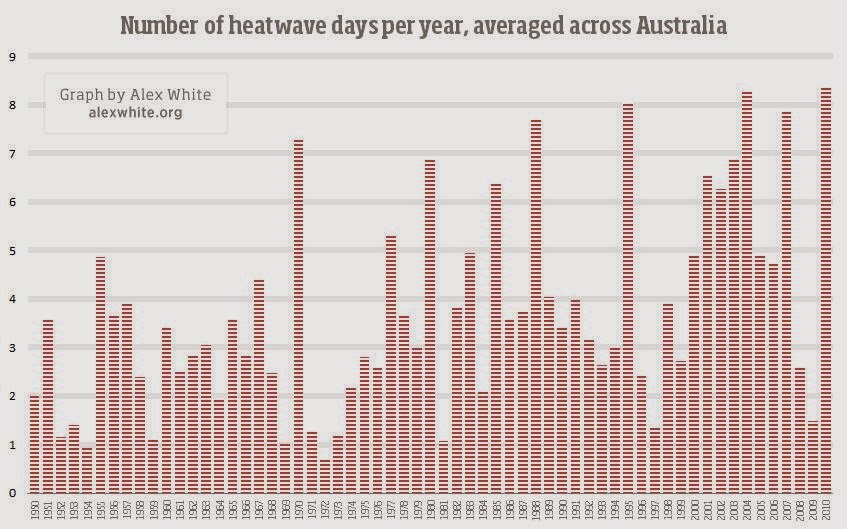 Miranda Devine wrote in 2013 in The Daily Telegraph "Australia has never had a mild and easy climate" and then proceeded to list a number of hot days in Sydney in the 1800s. This, according to Devine, is proof that because there was extreme heat in the past, that the heat waves we experience now are normal.

Meanwhile, prime minister Tony Abbott denounced common sense and the growing body of scientific evidence that links climate change to bush fires. In an interview with the Washington Post in October last year, he used standard denialist lines to cast uncertainty and doubt: "Australia has had fires and floods since the beginning of time. We've had much bigger floods and fires than the ones we've recently experienced."

Last year was, of course, a record year for Australia in terms of heat waves, fires, etc.   This year seems to be picking up where last year left off.  Bear in mind that happened during an interval of ENSO neutral conditions, there was no El Nino event which, in terms of Australia, is like adding a blast furnace to the mix.
But there are cautious warnings that the world could be in for a substantial El Nino beginning this spring.  If that does come to be, this could be an ugly summer for Abbott, Murdoch and their denialist crowd.
Sorry, Australia, but you elected this clown.  Good on ya.
﻿
Posted by The Mound of Sound at 9:31 AM

yes, it is quite true there have been droughts before, when there weren't so many people on the earth. However, now there are many more people and the impact of extreme weather/climate has a greater impact. Where once fires ran through thousands of unoccupied land, now its occupied. It really doesn't matter what is causing the current "weather problems", governments/people need to be prepared and guard what they currently have. that may well mean moving people out of areas, cutting back on how we treat the land. If industry is using too much water, than that will have to change. In times of drought, water is more valuable than oil.

Society needs to ensure further pollution of our environment doesn't happen. We may need those assets to continue life.