We've Got It All Wrong 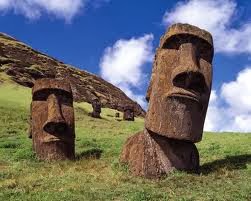 Seven years of this blogging business has been genuinely transformative.  It began as a means of communicating with like-minds, to exchange ideas and vent frustrations.  From there it morphed into what I tried to fashion into a progressive information service in which I scoured online news and opinion from around the world that I felt warranted dissemination.  Over the years I developed extensive bookmark directories of international news sites, progressive sites, environmental sites, think tanks and even military affairs sites.  When something caught my eye, I would wrap it up and bring it home to share with my fellow progressives.  That, and a smattering of original opinion pieces, have resulted in a body of almost 10,000 posts with hundreds of orphaned drafts never posted.

Seven years is a long time to be feasting on a banquet this rich.  You can't do that indefinitely without developing a chronic case of moral indigestion.  That's pretty much where I find myself now.

I think I've explored most of the critical threats facing mankind today and for generations to follow - anthropogenic global warming including severe storm events of increasing frequency and intensity; ocean warming and acidification; severe droughts and flooding, both cyclical and sustained; the retreat of glaciers and polar sea ice; sea level rise coupled with major storm surge triggering coastal inundation and salination of freshwater resources; ongoing deforestation and desertification (the exhaustion of productive farmland and its reduction  into sterile desert); resource depletion and exhaustion, particularly the rapidly growing, global freshwater crisis; species depletion and migration, especially the collapse of global fisheries and the loss of biodiversity; pest and disease migration such as the pine beetle ravaging tens of  thousands of square miles of western forests; overpopulation and population migration; and a host of security threats including the rise of religious fundamentalism whether Muslim, Christian, Jewish or Hindu; inequality and food insecurity; the decline of democracy and the rise of authoritarianism; the utter demolition of the right of privacy and the follow on decline in virtually every other right and freedom we for so long took for granted; terrorism; nuclear proliferation; shifts in the balance of economic, political and military power and hegemony; and the several arms races now underway, especially through South, Southeast and East Asia.

It would be massively uplifting if we could take even some chunk of these problems that we have worked on and made real progress in remedying over the past decade or two.  We haven't.  There is no such chunk.

Yesterday I put up a post about Clive Hamilton's book "Earth Masters" in which he writes that mankind has parted company with the Age of Reason.

"For 300 years or so we've imagined that we are rational creatures who gather evidence, assess it and change our behavior in order to assure our future," Hamilton says. "Well, we're not doing that."

I was inspired to coin a metaphor for mankind in the 21st century:  The tsunami sirens are wailing and we're standing on the beach with our backs turned to the ocean.

Over the years as my list (above) of gathering global cataclysms, maladies and catastrophes grew, I challenged readers to go through them and try to spot the common threads that connect them.  As Jared Diamond points out in "Collapse" problems like these are linked and solving any of them is dependent on solving pretty much all of them.  That probably goes a long way to explaining why we've made no progress or, worse, simply watched as they steadily worsened.  We can't tackle these without Age of Reason enlightenment and that tank is on empty.

In the past couple of years I've become convinced that the way we've been organized - economically, politically and socially - ways that evolved from the beginning of the Industrial Revolution - have trapped us and enfeebled us.

Even as mankind now consumes half again more than the Earth's ability to replenish renewable resources we still quest for perpetual growth.  If there's not enough water we'll mine our fossil aquifers.   If there's not enough food we won't quit until our farmland falls to desertification and, one by one, our global fisheries collapse.  I was over at the docks on Monday and watched trawlers offloading hake.  Since when does anybody fish hake?  Well they do now.

We're not, as a civilization, politically organized to meet these challenges.  We still approach global threats on a state by state basis.  It produces a "just not yet" resistance.  The guy standing at the very edge of the cliff staring down into the abyss may be yelling his head off, demanding action, but the guys standing two or three rows back figure they've still got a little more time.

We're not well organized socially either.   Social cohesiveness seems to be faltering.  We're stratified, fractured today with the glue of social cohesion, the middle class, being pummeled into submission.  If we can't find common cause as a society, as a nation, what possible chance do we have of acting on a civilization-wide scale?  Let's just call it "none."

Our 18th century economics, 19th century industrialism and 20th century geopolitics worked well enough (for us at least ) until the Earth's population passed the 4-billion mark.  That's when we started tripping over our feet.  That's when we stopped dealing with our rapidly emerging problems.  That's when "just not yet" began and that remains our default mode today.

Even progressives seem to wilt when these unpleasantries are raised.  In that there's a sobering, brutal lesson.  If we won't embrace these challenges that so imperil the future of our children and grandchildren, no one will.  If we don't make these issues our priority and compel our leaders to make them their priority, no one will.

It's time we took a stand and that means more than just writing about taking a stand.
Posted by The Mound of Sound at 10:45 AM

An incisive analysis of our current state, Mound. My wife says that we are a doomed species, a viewpoint I have thus far been unwilling to totally embrace, but more and more evidence accumulates to suggest that I am in denial here.

I, and countless others, read you daily; there is doubtless great value in being armed with as much information about the real state of the world as possible. Beyond that, there is strength to be drawn in knowing that others share common concerns, frustrations, and feelings of impotent rage. Without a community of the like-minded, one can only feel isolation and loneliness that could give way to despair and withdrawal.

What I am trying to say here is that I hope you continue as long as you can in this seemingly futile and ceaseless battle. We will only be truly doomed when the last voice of dissent falls silent.

Well said Lorne. I often feel like I'm alone in a wilderness of irrationality. My friends & family in general think I'm paranoid and foolish when I try to discuss global problems. They sometimes agree when it's a personal & local concern, but still believe in an economy of unlimited growth within limited planetary resources. It's a kind of religious faith that can only lead to disaster.

Can somebody tell me if ProgBlog is down? I'm tinkering with a new, high-security, heavily-encrypted web browser. Right now it's letting me open everything from my bookmarks except ProgBlogs.

Hi Mound, I think it must be down, I cannot access it either, and there is a comment on Simon's blog from Anonymous saying the same

Perhaps Chris Hedges has it right, Mound. It will take rebellion -- and that means people in the streets or in front of the bulldozers.

I don't see much popular interest in rebellion, Owen. Where are the angry demands for reform? I don't think there is such a thing.

Democratic, grassroots, cooperative socialism provides answers to most of the world's major problems. The roadblock is that most working-class people (who make up the vast majority of the world's population) consider themselves middle class and just on the cusp of joining the upper class. At best, they play along and keep their heads down. At worst, they act as attack dogs for the elites who are keeping them down. Humans are their own worst enemies.

I take the fatalistic approach, Mound. Each of us is a mere speck in time and space, and so for that matter is our species, so best not to take things too seriously. We may rally our intelligence, wisdom and morality and avoid the collapse of our civilization or we may not. I dearly hope we do, but if we don’t the universe will hardly notice. In the meantime, I just do my best and enjoy my moment.

Hi, Bill. I think yours is the only approach that can be taken for someone to remain sentient and sane. A couple of years back I wrote about the magnificence of the clear, night sky in mid-summer when a person can lay back and realize we're seeing light reaching us now that is hundreds of thousands of years old and that this sky looks almost identical to what our earliest ancestors would have gazed into. That really does bring home that we are indeed infinitesimal in time and every other dimension.