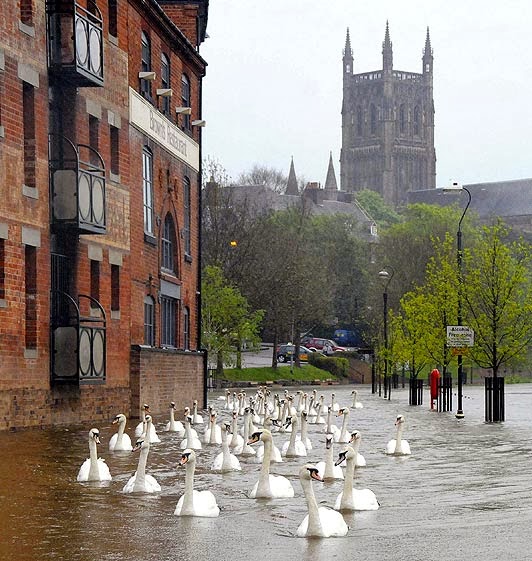 Why are governments becoming increasingly detached from reality?

In recent years the news has been full of stories about heavy and sustained flooding in Britain.  We've all seen the pictures of historic villages inundated, entire residential neighbourhoods flooded out.  You would imagine that sort of devastation would send a government racing into action, especially a Conservative administration like Cameron's.  Well, as this report from the Telegraph demonstrates, that's not the case.

It would be “absurd, given the knowledge we now have,” said the Environment Secretary, Owen Paterson, last month, “to build houses or anything else on a flood plain.” Scientists and insurers have said the same, but the hard truth is that developers probably won’t take much notice.

According to the latest land use data, 7 per cent of all new dwellings in 2011 were built on flood plains. Over the past decade, about 40,000 properties went up on wholly or largely undefended land at “significant risk” of flooding, said the Government’s Committee on Climate Change (CCC).
Development on flood plains grew faster than development in the rest of the country. Surely now that will change? But political memories are short, and the problem is that southern England, seeing enormous population growth, probably cannot find room for all the new homes it needs without building on flood plains. Even where it could, some government policies push in the opposite direction.
The “National Policy Planning Framework” requires local authorities to “significantly boost” land available for housing. Across the country, including in currently flooded areas, councils are planning to allow tens of thousands of new flood plain properties as they struggle to meet this target. Flood plain or Green Belt is most of the development land that some councils have. Faced with that choice, any local politician would choose flood plain.
In the end, the only answer may be to accept development, but make it flood-proof: houses on legs, for instance, with garages or car parking at ground level. Developments in catchment areas need to be given tanks and pools to mop up water that plants used to absorb.
In the long term, flood plain homes not built like this will probably be uninsurable anyway, unmortgageable, and thus unsellable. The market will probably do more to stop bad development than the Government ever can.
Posted by The Mound of Sound at 3:42 PM