Look Whose Flag is Flying Over Southern Ukraine 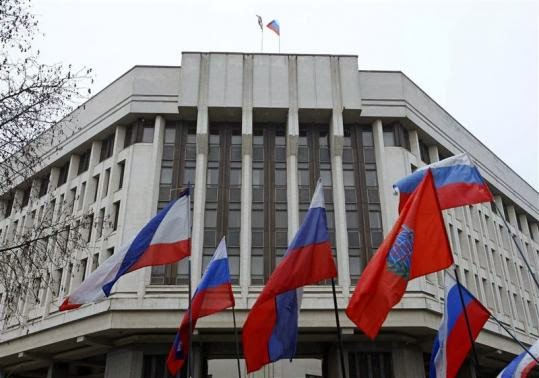 The Russian flag waves over the Crimean parliament building in Simferopol.  It's beginning to look as though Moscow is not going to let Crimea fall to the interim Ukranian government in Kiev.

The Crimea is historically Russian.   It was transferred to the Ukraine in 1954 by Kruschev but it retains an ethnic Russian majority.   Forces in unbadged uniforms but believed to be Russian Navy marines have taken control of the Crimean parliament and two airports.   Russian helicopters are reported to have been seen overhead.

Crimea's Tatar Muslims, who only returned after the fall of the Soviet Union, are pro-Kiev, pro-E.U. but remain a minority.
Posted by The Mound of Sound at 8:38 AM

"The Crimea is historically Russian¨? No. The Russians annexed it only in 1783, when the population of Crimea was 95% Tatar. In ancient times, Scythians, Venetians, Genoans, Turks, Greeks and others has held sway here. The Tatars were killed off and deported en masse by Stalin, and have only recently begun to return in small numbers.