Cognitive Dissonance is a Lousy Political Platform, Even for the Liberals. 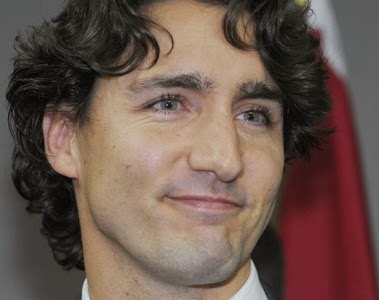 Case in point.  Justin Trudeau is an avowed supporter of bitumen trafficking.  It would seem he draws the line of environmental consciousness somewhere between bitumen and asbestos even though high-carbon fossil fuels, not asbestos, could well destroy our civilization and ruin Canada for future generations.

It's not that Trudeau rejects the theory of anthropogenic global warming (or at least he hasn't said as much) but he seems to compartmentalize his dissonance, clearly choosing to block out information about CO2's contribution to global warming when he proclaims his fealty to bitumen.

It's not that Justin is going to come right out and say that he wants Canada to punch above its weight in contributing to the rapid growth in atmospheric greenhouse gas emissions that are already wreaking havoc around the world, especially in our far north.  He would never say such a thing but you can infer that intention from his platform. You can't divorce consequences from the policies that trigger them.  Can't be done.

Justin likes to convey the impression that he's all about values, quite ready to make the tough, moral decisions.  I'd like to believe him, you know, but it turns out cognitive dissonance is like a virus and can be highly contagious.  If you suspect you've already been infected, go see your doctor.

And he is about to have a third kid, so he clearly has no problems with an expanding human population.

Yea Gads! Whom do we as Canadians vote for during the next coming election. The Liberals would have us believe they are concerned about change for the good of Canada and Canadians. They need to shout loud and clear what their platform about such as less pollution and much development of alternative energy; make it known the more trees harvested, the less oxygen; dirt and poison poured into the oceans, the less oxygen being produced especially the Atlantic Ocean due to its type of phytoplankton; no devastation and poisoning of the land and drinking water; more sustainability; better built buildings; corporations made to clean up their mess; stop selling Canada off to foreign countries; talk about population control. What of the NDP? What do they firmly assert regarding the above? We all know where the Cons stand. I suggest we who want an alternative, move to B.C. two months before the next election and vote for Elizabeth May....Anyong

@ Anyong - The NDP back dilbit about as heavily as the Libs. They both want power and they both see that's part of the price they'll have to pay to get it. If that sounds like they're willing to sell out the country for personal political advantage, it should.

@ Anon. I've often wondered about JT's young kids and what sort of Canada he wants to pass to them and, in turn, their kids.

Yup! Being puerile is not a problem here. Understanding the willingness of the political parties presently found in the House of Commons, in double crossing the Canadian Public in handing over portions of Canada to Foreign Entities hasn't passed me by. Anyong