Galbraith Was Right. In America, Socialism Is For the Rich. 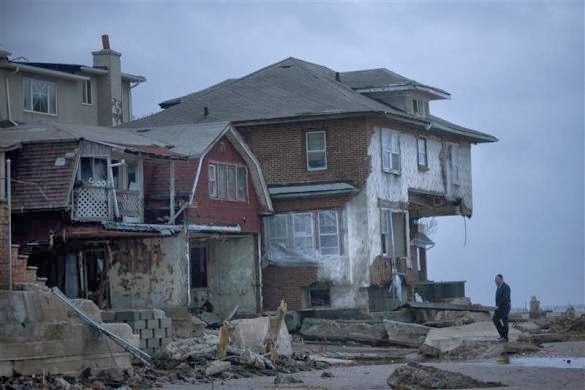 Whether it's from sea level rise, storm surge or heavy rainstorm inundation, Americans are getting a crash course in the reality of severe flooding.   That's a problem because the well off like nothing better than to live as close as they can get to the waterfront be that a river, a lake, or, best of all, the seaside.

Waterfront properties are expensive and, when floodwater reaches those properties, so are the repair bills.  America's private insurers figured that out some time ago and stopped offering flood insurance.  At that point, Congress came to the rescue and introduced federal flood insurance at reasonable rates.

The mandated increases under Biggert-Waters started hitting at the same time when FEMA issued new flood maps. This is a periodic process, but the latest version reflected recent experience with more frequent and severe storms. As a result, people whose homes had never been in floodplains (and hence required to buy insurance) were newly included,. Those already in a flood area saw their premiums increase, at a minimum due to Biggert-Waters, plus many were hit by having their home moved into a higher risk category. The result was many faced increases of tens of thousands of dollars in annual premiums. For instance, a Bloomberg headline wailed about seven-fold increases; a NOLA story about St. Tammany Parish listed several cases of more than ten times premium increases.

Biggert-Waters is in the process of being cut down into something that causes homeowners less pain, meaning taxpayers will now as a matter of policy (as opposed to by accident) be subsidizing coastal homes. The Senate passed a bill that would delay rate hikes (those to cover the $24 billion shortfall) by four years. Ooh, but the bill expires in four years! House members want some modifications in the Senate bill, but odds are high that some form of relief or de facto termination of the bill will take place.

Even FEMA came to the rescue of the rich and beautiful.

As homeowners around the nation protest skyrocketing premiums for federal flood insurance, the Federal Emergency Management Agency has quietly moved the lines on its flood maps to benefit hundreds of oceanfront condo buildings and million-dollar homes, according to an analysis of federal records by NBC News.

The changes shift the financial burden for the next destructive hurricane, tsunami or tropical storm onto the neighbors of these wealthy beach-dwellers — and ultimately onto all American taxpayers.
In more than 500 instances from the Gulf of Alaska to Bar Harbor, Maine, FEMA has remapped waterfront properties from the highest-risk flood zone, saving the owners as much as 97 percent on the premiums they pay into the financially strained National Flood Insurance Program.

As for those without any economic or political clout?  Well, let them eat cake.