Canada's Mythical Middle Class and the Quislings of Parliament Hill 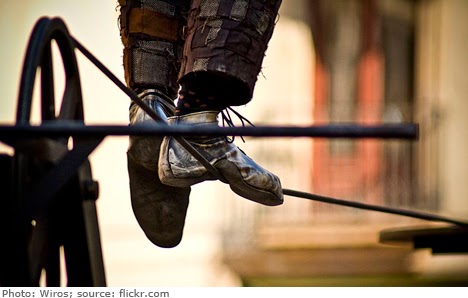 The government likes to say it's all about the middle class.  So, too, the opposition parties.  On Parliament Hill it seems Canada's middle class is virtually surrounded by a sea of friends, each clamouring to outdo the other to lend a hand, give a leg up.  With friends like that in high places, those of the middle class can surely look forward to a bright and prosperous future.

Except that it's a load of crap.

An internal report prepared for the Harper government by Employment and Social Development Canada and pried out of the cold dead Tory hands by Canadian Press via a freedom of information demand, paints a much different, far less rosy picture of the state of Canada's middle class and the future that awaits them.

"The wages of middle income workers have stagnated," it says, referring to the period from 1993 to 2007. "Middle-income families are increasingly vulnerable to financial shocks."

The document, drawing on three years of "internal research," was prepared for the department's deputy minister, Ian Shugart, shortly before the resumption of Parliament last fall.

"In Canada, political parties are making the middle class a central piece of their agendas," notes the presentation.

"The market does not reward middle-income families so well," says the report. "As a result, they get an increasingly smaller share of the earning's pie" compared with higher-income families.

The Cheney-inspired, neo-conservative government of Harper, Flaherty, Oliver et al, seem happy enough to watch the middle class devolve into an American-style 'precariat' while the spoils of their labour increasingly accrue to the wealthy.  Mulcair and Trudeau, with their pledge not to increase taxes, appear to be walking in lockstep with Harper.

"Over the medium term, middle-income Canadians are unlikely to move to higher income brackets, i.e., the 'Canadian dream' is a myth more than a reality."

When judging the culpability of our parliamentarians for this deplorable condition, remember this.  Most inequality today and most of the stagnation of the middle class isn't market-driven or merit-based.  It is legislated, the creature of statutes written and passed on Parliament Hill.  Harper knows it.  Mulcair knows it.  Trudeau, unless he's an idiot, knows it.  It's about time we got some straight talk from these characters - not from Harper of course but at least from our own.

Of course, we could have told 'em that. Indeed, we often do.

...if you think being middle-class is difficult, let me tell you; we working poor, food insecure, hand-to-mouth types left difficult ages ago. We've now entered, flying by the seat of our pants--despair. Let us know when there's food and shelter for 'everyone'. We're too hungry and cold to look any more...

L&LI - I can't imagine why you're a Liberal supporter. You're not part of their natural constituency nor, for that matter, any other party's.

We had a good run with the NDP here in B.C. in the late 70's/early 80's. What became apparent during the end of Glenn Clark's premiership was that the NDP really didn't give a dam about the poor or working poor but, instead, their focus was on trades and union labour.

Hang in there and hope.

So the document "was prepared last October by experts in Employment and Social Development Canada", drew on "three years of internal research", and covers the 14 years from 1993 to 2007 - yet stops the year after the global recession began and the Cons came to power? Really?

Yeah, that aspect doesn't sound entirely coincidental. We can be confident that the picture has worsened significantly since 2008.

Excuse me Dis, but being of the school of liberalism, just society and true freedom of the individual, I believe there is much more to it than being a supporter of any party. It's a way of *doing* better``for everyone. Those that choose not to, (because you cannot legislate kindness) fine. It may or may not be in their heart. As for hope *and* hard work, we people of Canada have almost always choosen that any day--over LuntzyRoveyAttwater jingoism and dog-whistle, race-baiting, coded commitments to their base. And for every Thatcher/Regan/Bush/Harper economist(?) they throw up, I would offer John Stuart Mill and Bertrand Russel. FDR and JFK. Martin Luther King, Tommy Douglas, Lester Pearson and, yes...Pierre Elliott Trudeau (the most fun PM we've ever had!) who, in his September 12, 1968 throne speech, said "THE ATTAINMENT OF A JUST SOCIETY IS THE *CHERISHED HOPE* OF CIVILIZED MEN"...

I agree entirely. I am a very committed, small 'l' liberal and it troubles me no end to see how freely the LPC has jettisoned those values.

I would suggest that liberalism is a living, worl-view, among other things, that is subject to changes in evidence etc. That's the beauty of it. To say they've "jettisoned those values" that we hold is to discuss history while we should be talking about how to help put those values back in place. That is our civic duty. Have a great day!