Justin, Did You Think This One Through? 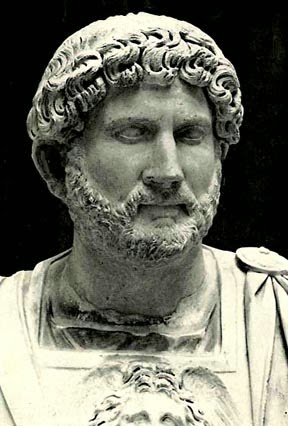 Congratulations to Justin Trudeau on the birth of his third child, a son who'll be named Hadrian.

When we hear "Hadrian" we probably think of the Roman emperor Hadrian for whom the Hadrian Wall in Britain is named.  That Hadrian is considered one of Rome's 'Five Good Emperors.'   Good, that is, unless you're Jewish.

You see, it was on Hadrian's watch that the Jews in Judea revolted.  Hadrian flew into a tizzy, amassed a huge army, crushed the rebellion and drove the Jews from their homeland.   Hadrian is credited with creating the Jewish diaspora.

According to Cassius Dio, 580,000 Jews were killed, and 50 fortified towns and 985 villages razed.[2][18] Cassius Dio claimed that "Many Romans, moreover, perished in this war. Therefore, Hadrian, in writing to the Senate, did not employ the opening phrase commonly affected by the emperors: 'If you and your children are in health, it is well; I and the army are in health.'"[10]


Hadrian attempted to root out Judaism, which he saw as the cause of continuous rebellions. He prohibited the Torah law and the Hebrew calendar, and executed Judaic scholars. The sacred scroll was ceremonially burned on the Temple Mount. At the former Temple sanctuary, he installed two statues, one of Jupiter, another of himself. In an attempt to erase any memory of Judea or Ancient Israel, he wiped the name off the map and replaced it with Syria Palaestina.[20][21][22] By destroying association of Jews to Judea and forbidding the practice of Jewish faith, Hadrian aimed to root out a nation that engaged heavy casualties on the Empire. Similarly, he re-established Jerusalem but now as the Roman pagan polis of Aelia Capitolina, and Jews were forbidden from entering it, except on the day of Tisha B'Av.[23]

Yet, Hadrian's death in 138 CE marked a significant relief to the surviving Jewish communities. Rabbinic Judaism had already become a portable religion, centered around synagogues, and the Jews themselves kept books and dispersed throughout the Roman world and beyond.

Justin, it's probably not too late.  Just think this over.

Sure enough, just as I expected, the National Post twitched to the Emperor Hadrian/Jewish pogrom angle.  Kinsella is raging with indignation.

yeah he should have went with just plain ol' Alex. As for military dictators that name holds less offense?
I think a name is a name...well I guess he could have went for gusto and called Hadrian, Adolf.

Pope Stephen I to IX.

You know, Deb, that's exactly what I was thinking. The Hadrian choice goes to two weaknesses. There are some who perhaps rightly worry about family dynasties in high office. Here you've got father, Pierre; son, Justin; grandson, Hadrian who just happens to bear the mantle of an emperor/Caesar/Kaiser/king. It has an unfortunate ring to it.

It also touches on Tory smears that the Libs are not sufficiently pro-Israel and too soft of Palestinians. It's BS of course but the Tories don't hesitate to milk that sort of thing.

ahhh the tories would pick on JT even if he called his son Algernon. I dont know if the trudeaus will have their dynasty, but I sure hope Harper doesnt get another 4 yrs. Im a shortterm planner:D

I'm with Kinsella on this one, who the hell attacks a child birth?

They're not attacking the child. The baby didn't choose his name. They're taking an entirely predictable swipe at his parent who, as the leader of a national party, is very much fair game. I'm betting that Justin didn't consult baby Hadrian on the unfortunate choice of name.

So is it okay to point out that Harper, who has a fetish about the military and soldiers still not has had his son join?

Sure, why not. Chickenhawks in the U.S. are routinely slammed for never enlisting themselves and for the absence of their kids from military service.

I fully agree with Kinsella on this one, and more than a little disappointed in your tone here, Mound.


Sorry, doublenickel, but I didn't disparage their baby. What if they had chosen to call it Herod, or Benito? There are names that, for certain groups, have very negative, even painful, associations. Hadrian, for some Jews, is one of those.

As you know, Harper has gone after their votes by contending that only he is Israel's friend and the Trudeau Liberals are soft on the Palestinians. To some of those voters this will be more fuel for the fire.

When I read the name I thought "oh shit" knowing that it would be a matter of hours before the Right used this against JT and the Libs - and so they did just that.

I was a working reporter in Ottawa when Justin and both of his brothers were born. Margaret had all three at the Ottawa Civic. Her ob-gyn/pediatrician, by the way, was Dr. Manny Gluck.

The hospital was literally seeded with RCMP plainclothes security. I and many other reporters tried to find ways to sneak in to the maternity ward to get the first word. No matter how many times we tried we were all caught and tossed back out into the snowy night.

Sorry you're disappointed but I think that's misplaced. To contend that we wouldn't do the same thing if that baby had been born to Harper is, at best, dishonest.

Here's another thought, double nickel, that might help you and others unbunch your panties. It came to me from recollecting those days spent freezing outside the Civic Hospital waiting on Margaret. What if Pierre had named his son "Fidel" instead of Justin?

Fuck being Israel's friend - lets get something more nuanced and fair.

Anon, you and I are on the same page on that. It's the Liberals who seem unwilling to take clear stands to avoid losing support in 2015. It results in a morass of inconsistency, contradiction and obfuscation.

Attacks against politicians and party leaders I understand, but political attacks on a newborn in his first 24 hours of life? Really?

(Hadrian Trudeau: He's just not up to the job)

No one is attacking that baby except in your overactive imagination. All I did was point out the unfortunate connotations attached to the name. Not being Jewish it doesn't bother me in the slightest. It does, however, vex a segment of the Jewish community.

By the way, last I checked newborns aren't able to select their own names.

I tend to be suprised that Barrack was able to get elected with the middle name of Hussein.