Donald Trump probably believed he was in line for the Nobel Peace Prize. His Congressional munchkins certainly imagined he was a shoo-in. All the Mango Mussolini had to do was work his magic on North Korea's Kim Jong Un.

It seems to have gotten Trump's knickers in a bunch. So roused was the Giant Orange Bloat that he had a commemorative coin cast. 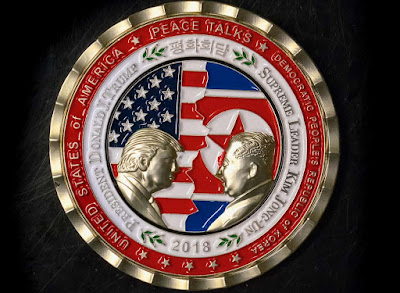 As they say, hubris is usually followed by nemesis. Trump blundered when he set the bar at the elimination of North Korea's nuclear weapons. He made it vastly worse when he brought uber-hawk John Bolton aboard as his national security advisor. Then Bolton and, more recently, veep Pence, have been on about the Libya treatment. Kim probably has some idea what happened to Gadaffi.

But look on the bright side. There's no specific date on that coin, just 2018. No mention of nuclear weapons either, just "peace talks." There's a bit of wiggle room there for Trump although those coins are probably heading for a smelter somewhere in the vicinity of D.C.
Posted by The Mound of Sound at 10:28 AM


The opportunity never existed except in Trump's imagination, Anyong. Kim was never going to give up his nuclear weapons. Like his father and grandfather before him, Kim's control over his country depends on an existential threat from the United States. Peace would be great, for the people of North Korea, but disastrous for its dictator and his generals.

Kim, like his father and grandfather, uses violent purges to keep his military leadership and rivals under control. Senior people are simply executed on whim. Their families - grandkids, kids, parents, the lot - can wind up in extermination camps. Fear holds the whole place together.

It's widely believed that, when Gadaffi buckled and killed off his government's feeble nuclear programme, that emboldened the opposition to rise up and, eventually, depose their tyrant. How would Kim avoid the same fate?

.. the reality is
North Koreans have no food on the shelves
a barely breathing economy
are desperate for irrigation in drought conditions
but all the money from somewhere, wherever
goes to dear leader and military hardware

Does this sound like Russia
& 'if only the emperor knew' ?

If drought persists.. they start eating
the broodstock.. cows, goats, sheep
and a generational livestock 'lag'
is inserted for recovery.. if ever

North Korea is a desperate country
Trump is too stupid to recognize this
But what the hey.. he has larger issues
closer to home.. his sons for one
and a guy named Mueller


I read that the US forced the vote on Korean famine relief and defeated the effort. My sense of it was that America saw it as a way to turn the thumbscrews on Pyongyang in advance of the summit.

Mueller should start indicting Trump's clan - Don Jr., Jared and Ivanka. No impeachment needed there. Then go after everyone else on the campaign team who is indictable. Expose Team Trump as a criminal enterprise in league with both the Russians and organized crime.

.. Mound, there's an old legend that a whip smart CIA analyst noted contemporary Russian drought conditions and also climate predictions re Russia. He filed a brief mentioning how it presented an obvious negotiating lever and his superior passed it uphill. It made it all the to The White House.

If the US did not continue wheat sales, the general Russian population would continue only by eating their broodstock.. Fowl, beef, goats, sheep. Then would come mass rebellion. So the USA, which was looking for nuclear disarmament leverage, lightly, and informally mentioned the threat.. this was the era of the SALT treaty I believe.. and Russia blinked and agreed.. they were desperate for the wheat.. and started reducing nuclear weapons. This was also the era when countries had actual diplomats.. not partisan carpet baggers

Its also a known fact that 'Russian' officers are detested by the enlisted men, who are approx 80% mongol.. and that together they are in the majority, alcoholics. The feared Red Army is a mob of alcoholics. They also can't keep track of a train loaded with troops or tanks either. I will never visit Russia.. and I believe I may never visit the USA again, aside from maybe a connecting flight or diversion.. its a shame, but it is what it is.. there are better places to go.. that are civilized.

We go to Havana Friday.. 1st trip ever.. but only 2 days & will stay at The Hotel Nationale.. no snorkelling, just walkabout with my camera & a beautiful woman & search for lobster & paella & chat with hotel concierges who know all things. I will re-read Elmore Leonard's Cuba Libre while there.. I think of his 46 or so novels.. it is the best.. set in the times just after the battleship Maine blew up in the Havana harbour.. I might have a mojito or two ! And a cuba libre enroute !

Have fun, Sal. A friend who winters in Cuba just got back and said it's getting really hot lately. Lots of loose clothing and sun screen are in order.