"The West, As We Once Knew It, No Longer Exists." 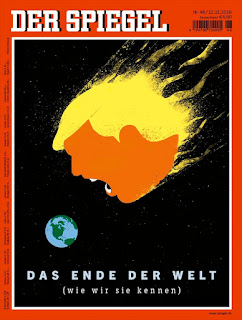 Der Spiegel has called upon Europe to join the resistance to Trump America. The editorial says Trump's unilateral withdrawal from the Iran nuclear pact has undermined the North Atlantic consensus.


...what are the benefits of Washington's radical move? There are none. Just chaos where there was once order. Just American capriciousness after decades of stability.

The most shocking realization, however, is one that affects us directly: The West as we once knew it no longer exists. Our relationship to the United States cannot currently be called a friendship and can hardly be referred to as a partnership. President Trump has adopted a tone that ignores 70 years of trust. He wants punitive tariffs and demands obedience. It is no longer a question as to whether Germany and Europe will take part in foreign military interventions in Afghanistan or Iraq. It is now about whether trans-Atlantic cooperation on economic, foreign and security policy even exists anymore. The answer: No. It is impossible to overstate what Trump has dismantled in the last 16 months. Europe has lost its protective power. It has lost its guarantor of joint values. And it has lost the global political influence that it was only able to exert because the U.S. stood by its side. And what will happen in the remaining two-and-a-half years (or six-and-a-half years) of Trump's leadership? There is plenty of time left for further escalation.

...The difficulty will be finding a balance between determination and tact. Triumphant anti-Americanism is just as dangerous as defiance. But subjugation doesn't lead anywhere either -- because Europe cannot support policies that it finds dangerous. Donald Trump also has nothing but disdain for weakness and doesn't reward it.

Clever resistance is necessary, as sad and absurd as that may sound. Resistance against America. 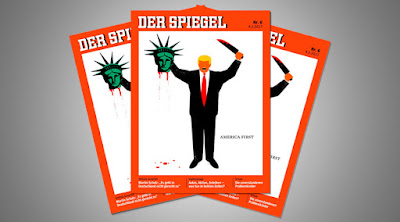 "It is impossible to overstate what Trump has dismantled in the last 16 months."

The Great Builder is a Great Wrecking Ball.


Who knows what will be left when he's finished tearing America apart, Owen.

These German poodles really make me laugh. Until such time as these cowards close down the American military bases on their soil, they'll do exactly what Herr Trumpenfuhrer demands, and they will grin and bear it.

Seriously though, the time for Europe to "resist" America came when the Iraq War crime started. They are 15 years too late in recognizing that being a vassal state is never a good thing.


I think they've done a bit of soul-searching, Karl, and now admit they compromised themselves for the sake of American protection.

I've also wondered about the presence of US forces and installations in Europe, particularly Germany. I suspect that's governed under an umbrella NATO Status of Forces Agreement that Washington might not want to see lapse. Germany has been essential for hospital services and transportation during the Middle East wars.

My sense is that the Europeans have relied on the presence of Uncle Sam, together with the European Union, to keep the Euro states from reverting to their old ways of endless bloodshed. It has been a long time since they went at each other hammer and tong.

Perhaps they now realize they can no longer have it both ways. There's been some talk of restructuring NATO along its original, Western European, lines to cut loose the authoritarian states such as Hungary, Poland, possibly Austria. There have also been proposals for the EU to be restructured, hiving off Eastern Europe and perhaps also jettisoning the Mediterranean countries because of the adverse consequences of climate change.

These are "exciting times" indeed, Karl.

Not only the West ; the whole world will never trust the USA again and with good reason..
The bogeyman of Russia and it's forebear the USSR has lost it's touch since Gorbachev.
Yes, the spooks still interfere with each nations politics ; but more for monetary gain than political change.
It the UK and the USA voting public are so ill informed as to be swayed by Facebook and their like whilst voting then we have more problems than we ever thought about!
May I add that Facebook/Cambridge Analytica Fox News and Christian fundamentalism are all guilty of deceiving the masses.

We have complicated politics and uneducated voters who wish for simple solutions to difficult questions.


No argument here, Trailblazer. A suitably well-informed electorate is indispensable to democracy and we've lost sight of that. Once you strip people of their ability to discern fact from contrivance, the remarkably fragile structure of democracy can fail.

In this age of the internet and consolidated media it is not surprising that many people are confused and make ill informed voting choices.
Add to this , we live in an era of selfishness as we have never experienced before.

In case you were wondering if Europe has the same kind of corporate Fake News plaguing it as North America...

Whenever oligarch wannabes are unhappy, I am happy. Thank you for making my day!

Thank you Donald Trump for giving these lowlifes in high places a taste of what they got coming!

(They can run. They can hide. They can take the whole world down with them. But they ain't going escape what they got coming. No one does.)