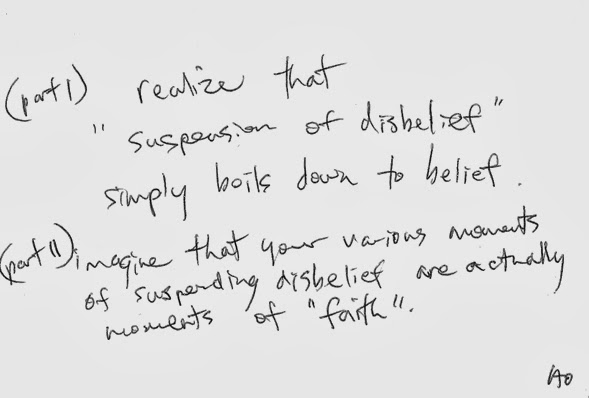 Climate change denialists are not skeptics no matter how much they try to make that claim.  If they were skepticists they would probably be scientists, not denialists.  Scientists are skeptics.   They practice skepticism as part of the scientific process.

Denialists are like those other wackjobs, religious fundamentalists, who aren't concerned with knowledge, evidence, facts and proof.  They substitute belief for those things.  Faith trumps all.  Reality, to them, is whatever they're told to believe it is.

Denialists are the dupes of powerful people and industries that cannot refute climate science and so instead seek to corrode the consensus with a cacophony of noise.  If these powerful people and industries could use science to come up with evidence, facts and research undermining the theory of anthropogenic global warming they would do it in a heartbeat because, for them, trillions of dollars hangs in the balance.  They have all the money in the world, they have the political classes "captured" and all they need is science that unravels the existing scientific consensus.  Don't think they haven't explored those options and don't think their decision to go the denialism route isn't an act of surrender to the scientific consensus.


The nay-sayers insist loudly that they're "climate sceptics", but this is a calculated misnomer – scientific scepticism is the method of investigating whether a particular hypothesis is supported by the evidence. Climate sceptics, by contrast, persist in ignoring empirical evidence that renders their position untenable. This isn't scepticism, it's unadulterated denialism, the very antithesis of critical thought.

Were climate change denialism confined solely to the foaming comment threads of the internet it would be bad enough, but this is not the case – publications such as the Daily Mail, Wall Street Journal and other Murdoch publications give editorial support to this view. Worse still, a depressingly large number of denialists hold office around the world. Australia's Tony Abbot decreed climate change to be "a load of crap", and a sizable chunk of the US Republican Party declare it a fiction. Even in the UK, spending on climate change countermeasures has halved under the environment secretary Owen Paterson, who doubts the reality of anthropogenic climate change, despite the fact the vast majority of scientists say unequivocally that the smoking gun is in our hands.
It should be no surprise that the voters and politicians opposed to climate change tend to be of a conservative bent, keen to support free-market ideology. This is part of a phenomenon known as motivated reasoning, where instead of evidence being evaluated critically, it is deliberately interpreted in such a way as to reaffirm a pre-existing belief, demanding impossibly stringent examination of unwelcome evidence while accepting uncritically even the flimsiest information that suits one's needs.
The great psychologist Leon Festinger observed in 1956 that "a man with a conviction is a hard man to change. Tell him you disagree and he turns away. Show him facts or figures and he questions your sources. Appeal to logic and he fails to see your point." This is the essence of the problem, and sadly, Festinger's words ring true today: the conviction of humans is all too often impervious to the very evidence in front of them.

Motivated reasoning is not solely the preserve of conservatives. While nuclear power has been recognised by the IPCC as important in reducing carbon dioxide emissions, staunch and uninformed opposition to nuclear power arises often from the liberal aisle. In the furore over the Fukushima nuclear disaster (which has claimed no lives and probably never will) many environmentalists lost sight of the fact that it was a natural disaster, very possibly exacerbated by climate change, that cost thousands of lives. Instead, they've rushed to condemn nuclear power plants.
...Nor is there any inherent contradiction in an environmentalist being in favour of nuclear power – George Monbiot, Mark Lynas and James Lovelock have written eloquently on the importance of nuclear power in mitigating the ravages of climate change.

If we truly wish to avoid catastrophe, we must be pragmatic and take action. Ideological differences need to take a back seat if decisive action is to be taken. When one's house is on fire, the immediate priority should be putting the flames out, not squabbling about the insurance. Let us hope we realise this before it's too late.
Posted by The Mound of Sound at 8:29 AM

I know Mound. This denialism under the guise of intelligent critical thought, drives me a bit batty. I have stopped ever trying to convince the folks who only read what they want to believe. I met plenty of folks who felt their faux skepticism was going to colour them brilliant in the coming years. Now they just quietly gripe in the face of such opposition or say nothing anymore.

But the folks who purposefully do this for economic benefits, they are truly the worst kind of weasel. I give you Joe Oliver:P

Excellent article, but he displays a bit of what he describes when he claims Fukushima hasn't killed anyone and isn't a problem. First, it definitely has killed some people. Second, it's reportedly created thyroid problems in 25% of the region's children. Third, after a great deal of more normal stonewalling and doing their best to avoid measurement, the Japanese government has now passed a law making it illegal to report on the place. I can't think of any plausible reason they'd need to do that if the evidence such reportage would gather was benign.

Physicists tend to like nuclear power. It's their baby, it promotes their expertise, it employs many of them. Whenever I see that someone boosting nuclear is a physicist, I add a few extra grains of salt to the spoonful I start with.

Hi, Deb. I had Joe Oliver in mind before I posted this but failed to mention him. His very statements reveal irrationality for that is the stock in trade of denialism - rejection of the rational.

PLG - WHAT? You don't believe scientists when their views don't comport with your beliefs? They're only "in it for the money." They're pulling the wool over our eyes to feather their own nests.

The accident killed nobody from radiation directly. Two workers outside the plant were crushed by the tsunami. One worker died from a heart attack. Radiation is unlikely to kill very many workers, let alone civilians, and we'll not likely ever know, since the expected number of extra cancer deaths are at such a level that they would not be statistically different from the background levels (which is for all intents and purposes, also the case at Chernobyl: see wikipedia).

The thyroid abnormalities found are likely because they are being looked for. If you don't look for thyroid problems in any population you will not find them. It's an artifact of screening. (Read about it on wikipedia!)

Quite a few people died during the evacuation (Wikipedia says 1600). And there are enormous social and mental problems that come from forced relocation and society's general fear of radiation. Those are the big problems of nuclear accidents, not radiation per se. (And they are big problems: I won't minimize them.)

Hysteria is a live and well these days, Mound. Whether from the right or the left, hysterics are immune to facts.

I agree with everything here other than the take on Fukushima and nuclear power. I don't have the time to explain why right now though, it's quite expansive and touches and quite a few areas (when does my opinion not, right?) - I may do it as a blog post, we'll see.

Suffice to say though, we're only 2 years into Fukushima, there's roughly 40 years or maybe even more for Japan to decommission this unstable disaster while they struggle to find new places to put contaminated water and hit new record deficits due to the fossil fuel imports needed to replace the missing energy. For the author to say "nobody has died" as though the situation is over and has been dealt with is ridiculous. How many livelihoods have been destroyed?

This isn't part of my argument against further usage of nuclear power it just makes me angry how he goes on and on about being "uninformed" and in the process misinforms people.

Fukushima isn't even close to being over, and yes - it's a big deal in multiple ways.

Mound, he's a physicist not an epidemiologist. Physics is not directly the issue here, human health is. This is much like those situations where in the early days they could get scientists from areas unrelated to climatology, to claim climate change wasn't happening. Epidemiology is a subtle science with a lot of stats involved, much like climatology. It's easy for a physicist not to be much interested in or aware of its conclusions.

He evidently has not read very much about Fukushima in specific, because nobody, not even sincere nuclear power proponents, who has glanced at the matter much at all claims it hasn't killed anybody. It is at an absolute minimum very clear that it's killed some reactor workers. Indeed, he goes further and claims it probably never will kill anyone--this is staggering ignorance, frankly. It's absolutely clear that the amount of radioactive material that has been released is enough to cause large numbers of cancers; there is no doubt about this. And the release has not stopped. Nobody who has informed themselves about the issue at all seriously could make such a claim. The most thorough scientific assessment of the overall death toll from Chernobyl over the years puts it near a million. Fukushima has released more radioactive material than Chernobyl did, and has not yet stopped. Luckily much of it has not spread as widely as the Chernobyl plume did, so we can hope the death toll will be much smaller, but imagining it at probably zero is highly irresponsible. And if they let it continue leaking into the Pacific indefinitely we can probably kiss eating many Pacific fish goodbye; some of the elements involved, like many other toxins, go into the food chain and concentrate as they go up it.

All this is yet one more of those things that the media speaks little of. You are quite familiar with such issues; I don't see why this one should come as a surprise. The nuclear lobby is wealthy, if less wealthy than the oil lobby, and even more powerful than its wealth suggests due to its close connections to the military and government, both in the US and Britain.

Mocking me on this is not a considered response, it is wishful thinking.

You do realize the extent of the conspiracy you're alleging, PLG. You seem to believe physicists are these self-serving alchemists who can exist within the vast, multi-disciplinary scientific community pulling the wool over the public's eyes. The other disciplines, overlapping as they routinely are, simply stand mute in the face of this supposed hoax?

Fine, fair enough. At least come up with a body of thought in all those other scientific disciplines that supports your hypothesis because I've not seen that. If that's not possible then lay out your own scientific credentials to refute their claims.

Like the denialist community, the onus is squarely on you. He who propounds must prove - an old legal adage. You've propounded, now discharge the burden of proof you have accepted.

Woops had your link in my clipboard! My link -> http://canadiantrends.blogspot.ca/2014/02/choo-choo-train-wrecks-tale-of-cost.html