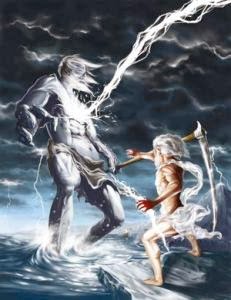 Gwynne Dyer thinks it was a nasty trick.  It was, after all, supposed to be the poor and vulnerable little people of the equatorial zone that were hammered by climate change, not us.

Well, what did you expect? The gods of climate are almost certainly sky gods, and sky gods are never fair. But they have always liked jokes, especially cruel ones, and they have come up with a great one this time. The people of the temperate zones are going to get hurt early after all, but not by gradual warming. Their weather is just going to get more and more extreme: heat waves, blizzards, and flooding on an unprecedented scale.

“In 2012 we had the second wettest winter on record and this winter is a one-in-250-years event,” British opposition leader Ed Milliband told the Observer newspaper on February 14. “If you keep throwing the dice and you keep getting sixes then the dice are loaded. Something is going on.”

The “something” is abrupt climate change. In Britain, it’s an unprecedented series of great storms blowing in off the North Atlantic, dropping enormous amounts of rain and causing disastrous floods. In the United States and Canada, it’s huge blizzards, ice-storms, and record low temperatures that last much longer and reach much further south than normal. Welcome to the “temperate” zone of the northern hemisphere.

There have been extremes in the “temperate” parts of the southern hemisphere, too. Australia has just had its hottest year ever, with record-breaking heat waves and severe bush fires. Argentina had one of its worst-ever heat waves in December, and parts of Brazil had record rainfall, floods and landslides. But that is probably just the result of gradual, relentless warming. The abrupt changes seem to be mainly in the northern hemisphere.

Dyer says it's not our fault we didn't see it coming.  After all, the deluge of severe weather events only hit the northern hemisphere over the past five years.

Dyer falls back on Jennifer Francis' now totally not controversial explanation of the polar jet.

Who needs Sky Gods?  We can do this all by ourselves.
Posted by The Mound of Sound at 12:53 PM

In some ways, Mound, it is rather apt that we in the first world are being made to pay for the sins of our conspicuous consumption and refusal to alter our affluent lifestyles to save the planet. We are getting exactly what our collective folly deserves.

Seen Trudeau's new video on the economy? Pushing growth growth and growth. Oh, growth didn't work for you? Well, what you need is more growth!

I'll be doing a post on his video, will be out later today. Hopefully you are too. It is a superb piece of propaganda, convincing. My original conclusions on Trudeau are stronger than ever: he is our Obama, an agent of the banking sector, and must be defeated. He is worse than Harper just as Obama is worse than Bush. At least with Bush/Harper their criminality is overt, once the Canadian Obama gets in we're going to be really screwed as "well at least it's not Harper" becomes the new national anthem.

I assume that you and I are of roughly the same vintage, Lorne. It astounds me that we lived for so many years without much if any awareness of what might befall mankind. We were brought up to be largely unquestioning of a form of social, economic and political organization that was inherently unsustainable and treated the naysayers as Cassandras just out for a little attention.

Hi, Richard. I watched Trudeau's piece. It sounds like the line his advisers figure will sell him in 2015.

His focus on growth and the economy is dispiriting and reminds us that he's all Margaret and no Pierre. If there was ever a time for a leader to renew the campaign for a just society, focusing on inequality, our democratic deficit, the environment and new forms of organization to meet 21st century realities, this is it.

poor old Dyer. He didn't realize the earth rotates on axis. He didn't realize winds could change. He couldn't see history. it isn't the first time the earth's climate has changed. Just check some history and geology books. its changed and sometimes with huge consequences, such as abandoned cities. if Dyer is supposed to be so smart, why didn't he figure it out. a lot of the rest of us do not find this unexpected at all.

What are you getting at, e.a.f.? Have you read his book "Climate Wars"?

This "isn't the first time the earth's climate has changed." That sounds like you took that from your Denialism 101 class.